I was pretty excited when I heard our book club book for September was going to be The Help by Kathryn Stockett. I have heard that this is an amazing book and it has been on my list forever. I even borrowed it from the library at one point but didn’t end up having the time to read it before it was due. I’d even seen 2 or 3 woman out and about with a copy of The Help in their hands.

Twelve days after I put it on my hold list at the library it came in. It is a large book, well over 400 pages, and was somewhat intimidating. The first fifty pages were a struggle for me. There were a lot of names to learn and a lot of information to absorb. I wasn’t sure whether or not I was going to enjoy the book. However, the more I read the more I couldn’t put the book down.

I really liked the style the book was written in.  Every chapter was told from the point of view of a different woman.  Becauseof this, I felt as though I got an inside look at what that particular woman was thinking and feeling, and really came to know many of the main characters.
The book is set in the 1960’s right at the height of the Civil Rights movement in Jackson, Mississippi where the women live. It gives us a glimpse into the lives of the middle class white families and the black women that work for them. We meet Minny, a black maid who has been fired 19 times and can’t find work. She eventually ends up working for Miss Celia, a white woman who came from nothing but married well. We also meet Aibileen, a older maid who works for Miss Leefolt. She is soft spoken, is amazing with children, and is the first person to help Miss Skeeter with her “tell all” book.

Miss Skeeter is a middle class white woman who has just finished college and dreams of being a writer. She receives word from a publisher in New York that if she can come up with an idea that is new and exciting yet dear to her heart, the publisher will consider it. At first Skeeter thinks of common issues that everyone is writing about. Then she hears about Miss Hilly’s bathroom initiative.
Miss Hilly, the Junior League’s president and the worst kind of white woman, embarks on an initiative to have all the households in Jackson install an extra toilet just for the colored help. She believes that colored people carry a plethora of diseases that the white families can easily catch. She is mean to the help and makes it her mission to separate the white families from their colored help in any way she can.

When Skeeter hears about the way Hilly has been treating the help, she thinks back to her own maid, Constantine, who was a friend as well as a caretaker. Skeeter decides to write a tell all book from the maids perspective on what it is really like to work for the white families in Jackson, Mississippi. The New York publisher loves the idea but warns it will be difficult to get the maids to confide in her, seeing as Miss Skeeter is a member of the Junior League and was roommates in college with Miss Hilly.

Things heat up for both Skeeter and the maids when Miss Hilly finds a copy of the Jim Crow laws in Skeeter's purse.  Hilly makes it her personal mission to figure out what is going on and in the process makes an outcast of Skeeter.  The women are scared now that Jackson, Mississippi's most powerful woman is on to them.  Late nights, secret meetings, and scared tales follow.

The book goes on to detail the lives of the black maids and the single white woman who wants to tell their story. It also gives us a glimpse into an unlikely friendship of a poor black woman and a white middle class woman. The women are all very different, and there will be hell to pay when the “tell all” book is actually published and the white ladies try to figure out which of the maids wrote about them. The names have been changed to protect the guilty but the stories are very distinct. In the end the book shows us the strength of the women in the south in this controversial period of time. 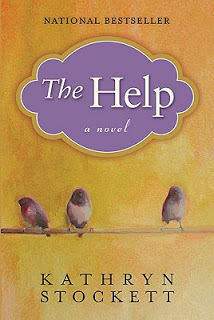