Fall is officially here as far as I’m concerned. The Steelers are on the TV, the nights are in the 40’s, the days are in the high 60’s, the leaves are beginning to change colors, and all I can think about is baking with pumpkin and apples. I have a few standard pumpkin and apple recipes that I enjoy making every fall, but this year I’ve been on the hunt for some new recipes.

In the past two weeks I’ve printed over 20 new pumpkin recipes and over 10 new apple recipes. It looks like my blog is going to be filled with these fall treats from now until Thanksgiving  I went to the market this morning and bought the large can of Libby’s Canned Pumpkin which will allow me to make three of the pumpkin recipes.

Since its Sunday I decided to start with the pumpkin cinnamon rolls because they require the most prep time. I kept the cinnamon roll part pretty true to the recipe I found here ,but I changed the filling to include more pumpkin flavor.

The smell from the batter was a spicy pumpkin scent. I couldn’t wait for the dough to rise. The recipe stated that it would take an hour for the dough to rise. Because my husband frequently makes bread, I know that in our house it generally takes around two hours for the first rising, which it did.  I then rolled the dough ut, put in the filling, rolled up the cinnamon roll, sliced it into 12 pieces, and put 3 rolls out to do a second rising.

The other 9 cinnamon rolls I placed into my new Glad Ovenware, which can go from the freezer to the oven. This recipe is great because I was able to bake the three that I wanted today and freeze the rest until we wanted more. I love that we’ll be able to have fresh pumpkin cinnamon rolls three more times before I have to make another batch. 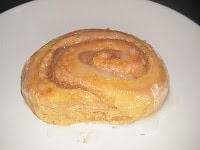 The smell from the rolls baking in the oven was heavenly. I almost took them out early because I could hardly wait to take a bite! After the longest 25 minutes ever, I was able to get my first look at the pumpkin cinnamon rolls. They were a golden brown and seemed to ooze the cinnamon sweet filling. I drizzled them with the glaze and took my first bite. They were amazing! They are sweet and spicy with a nice balance of the pumpkin. This is a fall recipe I’ll be keeping around for a long time. I can’t wait to have one on a chilly morning with a hot pumpkin spice latte.

2. Beat with a mixer at medium speed until smooth. Either use the dough hook on the mixer to knead for 10 minutes, or knead by hand for 10 minutes on a floured surface. While kneading, add ¾ cup to 1 cup of the remaining flour, a little bit at a time, to prevent the dough from sticking. 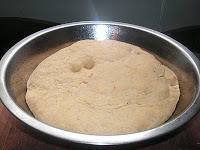 3. Place the dough in a large bowl coated with cooking spray. Flip to dough over to coat the top of the dough with cooking spray as well. Cover and let rise in a warm place, free from drafts, for about an hour (or two hours if you live where we do). The dough should double in size. 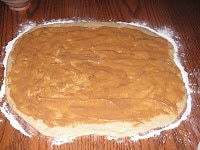 5. Meanwhile, in a small bowl combine all ingredients for the filling. Mix well. The filling should be a thick paste.

6. Roll the dough into a 12 x 10 inch rectangle on a floured surface. Spread the brown sugar mixture all over the dough rectangle (like picture to the right). Roll up the dough tightly, starting with the long edge, pressing firmly to release any air bubbles. Pinch the seam and ends to seal.

7. Cut the roll into 12 (1 inch) slices. Place slices in a 9-inch square baking pan coated with cooking spray. (I put 9 of mine in the Glad Ovenware to freeze for later consumption. If you are freezing them place them in a baking dish then cover with plastic wrap and then foil to make a tight seal. Freeze. When thawing, simply stick them in the refrigerator until thawed and continue to step 8).

8. Cover the cinnamon rolls in the baking dish and let rise for 30 minutes or until doubled in size. (Again, this took my rolls 1 hour).

10. To make the glaze mix the powdered sugar and the vanilla in a small mixing bowl. Add in the hot water 1 T. at a time using a whisk to mix the glaze. Sprinkle with cinnamon. Drizzle over the slightly cooled cinnamon rolls and serve warm. 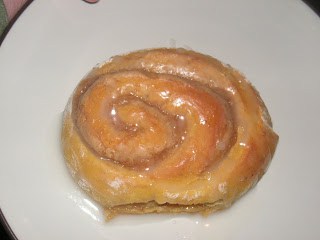 **Tell me abot your favorite pumpkin or apple recipe!  Feel free to link a recipe that is in your blog.**