A mysterious contagion will shatter countless lives unless a service dog and his trainer find a missing cat . . . in 24 hours.

A STALKER hides in plain sight.

A VICTIM faces her worst fear.

AND A DOG seeks the missing—and finds hope.

Eight years ago, animal behaviorist September Day escaped a sadistic captor who left her ashamed, terrified, and struggling with PTSD. She trusts no one—except her cat Macy and service dog Shadow.

They are each others’ only chance to survive the stalker’s vicious payback, but have only 24 hours to uncover the truth about Macy’s mysterious illness or pay the deadly consequences. When September learns to trust again, and a good-dog takes a chance on love, together they find hope in the midst of despair–and discover what family really means.  (-synopsis) 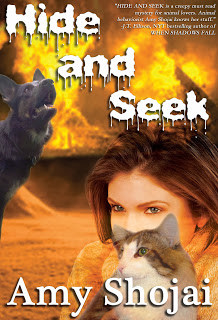 I liked this book from the beginning if for no other reason then Shadow, the German Shepherd autism service dog.   As a teacher of students with autism, and having 2 autistic nephews myself, Shadow captured my heart immediately.  This book was also interesting because it was told from Shadow's point of view.   Having a story told completely from the dog's point of view is something I have never seen before and it was quite and interesting take on the story.

Pair Shadow's character with September Day, an animal behaviorist who just escaped a terrible ordeal, and you have a team that is both lapping at their psychological wounds while trying to uncover what they can about a mysterious illness.   The illness has struck Macy, September's cat, as well as many others in Heartland.   No one knows what the disease is but it's causing major problems for everyone who has it.

With the help of Shadow will September be able to discover the truth about the mysterious illness or will Macy succumb to the illness?  Are Shadow and September mentally well enough to take on this task?  This fast paced thriller will have you on the edge of your seat until the very end.