Lately I’ve heard a lot of talk about Hummingbird Cake. I’ve never in my life heard of a Hummingbird Cake let alone tasted one but the reviews have been nothing but positive. I asked for a recipe and got a few that were similar. After seeing what was in the cake I knew I’d have to make one sooner or later.

We buy bananas a few times a month and usually when they start getting brown I make banana bread. This time, when I saw two of our bananas getting brown I went right to the local grocery store (Martin’s) and bought a can of pineapple and some pecans.

I was initially planning on making the actual cake but the more I thought about it I decided cupcakes would be better because we could eat some and I could take some into work. I checked two of the recipes I printed out and made some adjustments to turn them into cupcakes. The batter looked and tasted good.

I put them in the oven and the smell was heavenly. It was sugary with a hint of citrus and bananas. I couldn’t wait to get them out of the oven. They took a little longer to cook then I thought they would, but they came out looking wonderful. After cooling I put on the cream cheese frosting and a pecan on top. 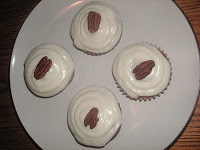 After the first bite Frank and I could not believe we had never had these before. They were amazing! The cupcakes were moist and sweet with a subtle taste of the bananas, pineapples, and pecan. There was also a hint of spice to them. They were perfect.

Because it’s just the two of us in the house I only frosted a few cupcakes at a time and kept the remaining icing in the refrigerator since it has cream cheese in it. We learned the next morning that the unfrosted cupcakes make a great breakfast muffin! I can’t wait for our next dinner party or birthday to share these with all of our friends.
Hummingbird Cupcakes (adapted from Southern Living ) 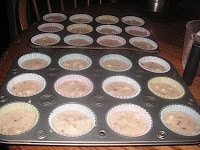 3. In a small bowl beat the three eggs. Add to the dry ingredients along with the oil and applesauce. Stir until the mixture is just moist. (Do not use a mixer). Stir in the vanilla, pineapple (with juice), pecans, and bananas until just mixed in.

4. Pour the batter into prepared muffin tins filling each cup ¾ of the way full. Bake for 22-24 minutes or until a toothpick comes out clean. 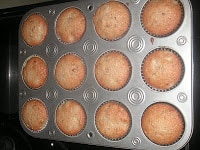 5. Cool in the muffin tins for 5 minutes then transfer to wire racks to cool completely.
For the frosting:

1. Beat cream cheese and butter at medium speed with a mixer. Add the powdered sugar 1 c. at a time until fully incorporated. Stir in vanilla and cinnamon.

2. Spread or pipe 1 ½ T. of icing on each cupcake. Top with a pecan. (Store extra icing in the refrigerator). 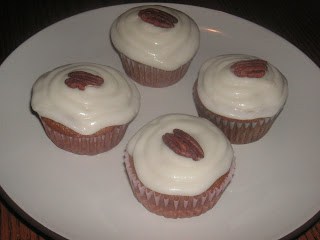