When I mentioned we were having pork chops for dinner my husband was not very happy. He was tired of having marinated grilled pork chops and pan fried pork chops. So, being the nice wife I am, I embarked on a journey for a new and yummy pork recipe.

I searched the Internet but many of the recipes were just variations of what we always have. I asked for some suggestions on the What’s Cooking? board on The Nest. The ladies there had some good ideas, but most involved the oven. It’s been in the 90’s all week, so I knew I wasn’t about to use the oven this week.

I finally decided to check out the Food Network site and see if good old Bobby Flay had any chop recipes. I was not disappointed. The first recipe that came up was for Cuban Style Pork Chops. My husband loves Cuban sandwiches and the best one he’s ever eaten was at Mesa Grill Bobby Flay’s restaurant in Las Vegas. In fact Mesa Grill was the best restaurant we ate at in Vegas. Bobby Flay knows what he’s doing in the kitchen-I’ll give him that. The food there was delicious. Anyhow, when I found this recipe I instantly knew that we had to try it. 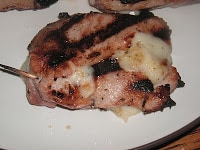 I sent my husband outside to do the grilling and when he brought the chops in I began drooling. They had a strong citrus and spice scent to them and were oozing the cheese and ham out of the sides of the pork chop. The juices were running on the plate and they tasted as good as they looked and smelled. I’d recommend pairing them with a slaw and baked beans.

2. Heat the grill to high

3. In a small dish, whisk together ½ c orange juice, ¼ c. lime juice, 2 T. oregano, the garlic, cumin, and canola oil. Pour into a freezer bag and add the pork chops making sure all four are covered by the marinade. Cover and let stand for about 2 hours in the refrigerator. 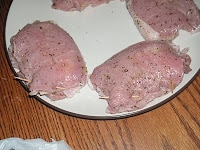 4. Remove the pork from the marinade and pat dry with a paper towel. Put the pork chops on a large cutting board and season with salt and pepper. Place one slice of cheese, ¼ of the ham, 4 slices of pickle and another slice of cheese on each pork chop. Fold the pork chop over and secure with a wet toothpick. Brush the top with oil and season with salt and pepper. Flip the pork chop over and repeat on the other side.
5. Place the pork chops on the grill. Grill on one side for 4 minutes or until brown. Flip and continue grilling an additional 4 minutes or until the bottom side is brown and the cheese is melted.

6. Serve with a mixture of ¼ c. orange juice, ¼ c. lime juice, and 1 T. oregano seasoned with salt and pepper. This dish can also be served topped with BBQ sauce. 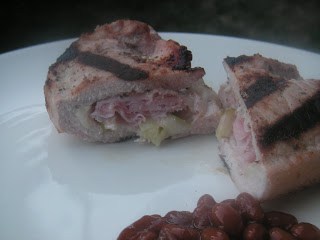