Hummingbird pancakes may be the most decadent pancake I've ever made!   They are great for brunch but sweet enough to enjoy as a unique dessert. 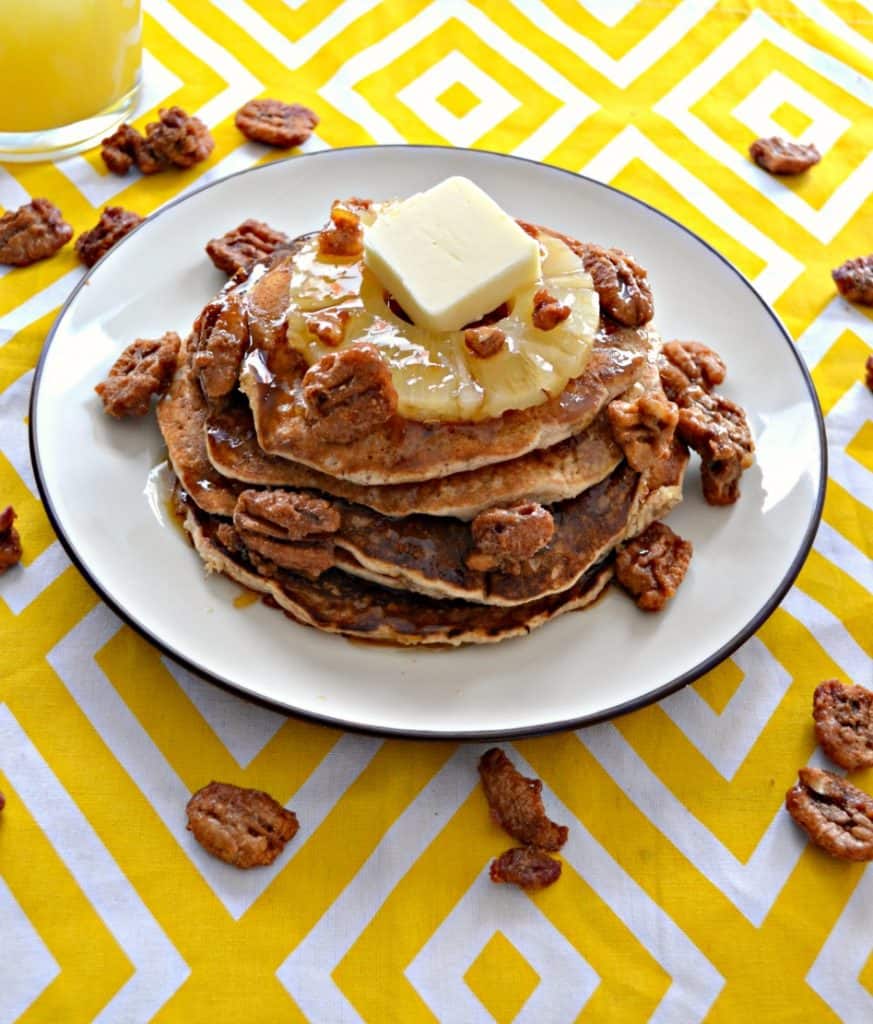 To date I've made 3 hummingbird recipes on my blog.   I started my blog in August 2010 and my first Hummingbird Cupcakes recipe appeared September 12, 2010 so they were one of my first posts.   The photos are horrible and I need to make them again but today wasn't the day.

Since then I have improved.  I made a cake in March 2013 that looks decent and then I had a really fabulous Bundt cake version in January 2017.   I love the flavors of pecans, pineapple, and banana that comes with a hummingbird cake but for Spring Sweets Week I wanted to do something different and unique. 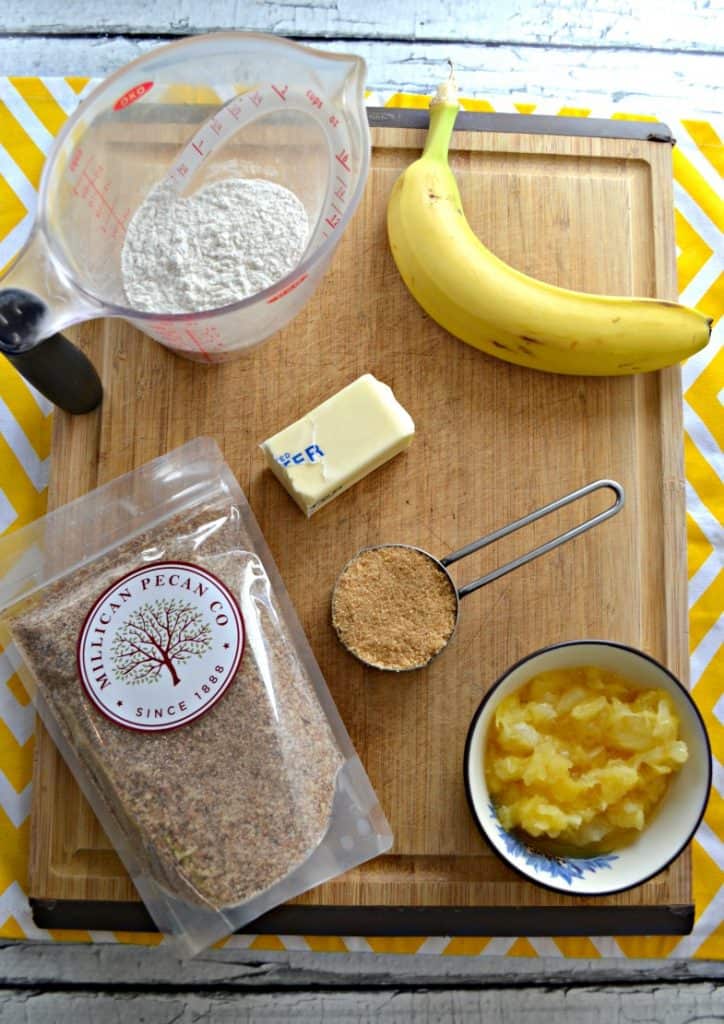 I came up with the idea for these Hummingbird Pancakes and they kind of morphed on their own.  The original idea was to make them with chopped pineapple and mashed banana and then sprinkle toasted pecans on top.   That's the basic idea but they are so much more.

The pancake is made with crushed pineapple, mashed banana, and Millican Pecan pecan meal.  I subbed in half a cup of the pecan meal in place of the flour and it really gave these pancakes a ton of delicious pecan flavor.

A note of warning about these pancakes.  They are heavy and you have to be patient while cooking them.  When the bubbles appeared on the pancakes I tried flipping them but they weren't ready.  I had to work my spatula around the outer edges twice before they were ready to flip. 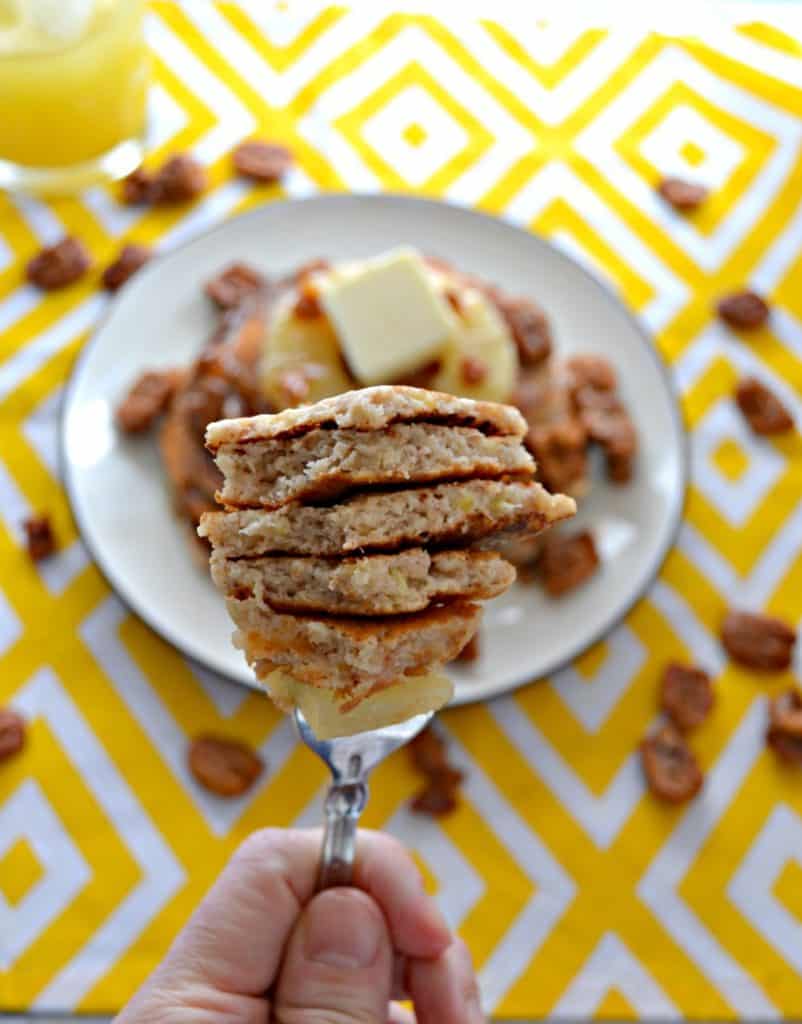 They do get really brown and beautiful though.   These don't taste like your everyday pancakes either.   They taste a bit like banana bread, a bit like pancakes, and have little jeweled pieces of pineapple throughout.  I loved the flavor!

You may think I stopped there with these pancakes but I didn't.  Instead of simply toasting pecans and throwing them on top I decided these pancakes must have praline pecans that I made from Millican Pecan pecan halves.  Pralines are really easy to make and then I had a bunch of them for topping these pancakes and other desserts. 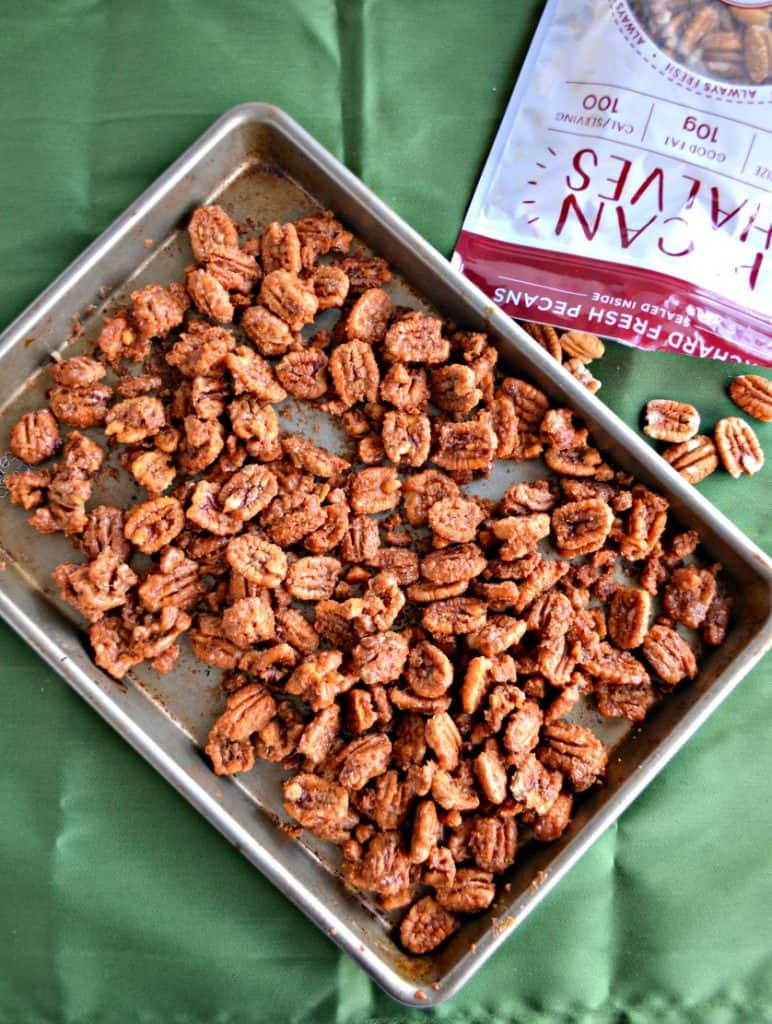 But wait....there's more!  Because I can be extra I also made homemade pineapple syrup to put on top of these pancakes which put them over the top.  Homemade syrup is super easy to make and I just added pineapple just to my version which was perfection. 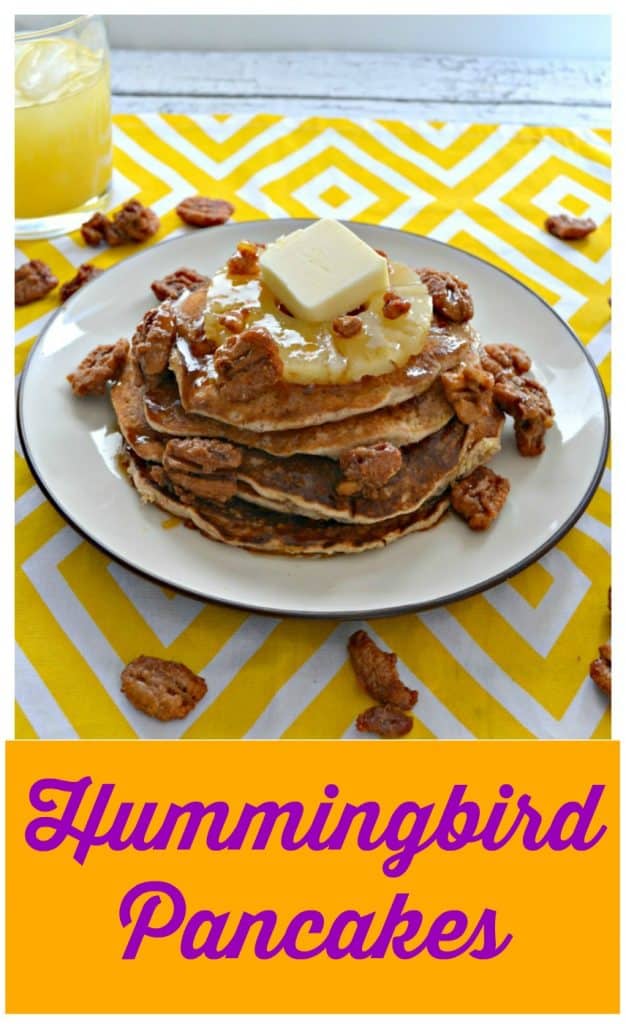 Picture it; pancakes filled with pecan flavor, pineapple, and banana, topped off with a pineapple ring, praline pecans, and homemade pineapple syrup.  To say this was the most scrumptious pancake I've ever had would be an understatement.

These would be awesome at a Sunday brunch or as a dessert.  Any time where a special breakfast or dessert is on the menu works for these pancakes! 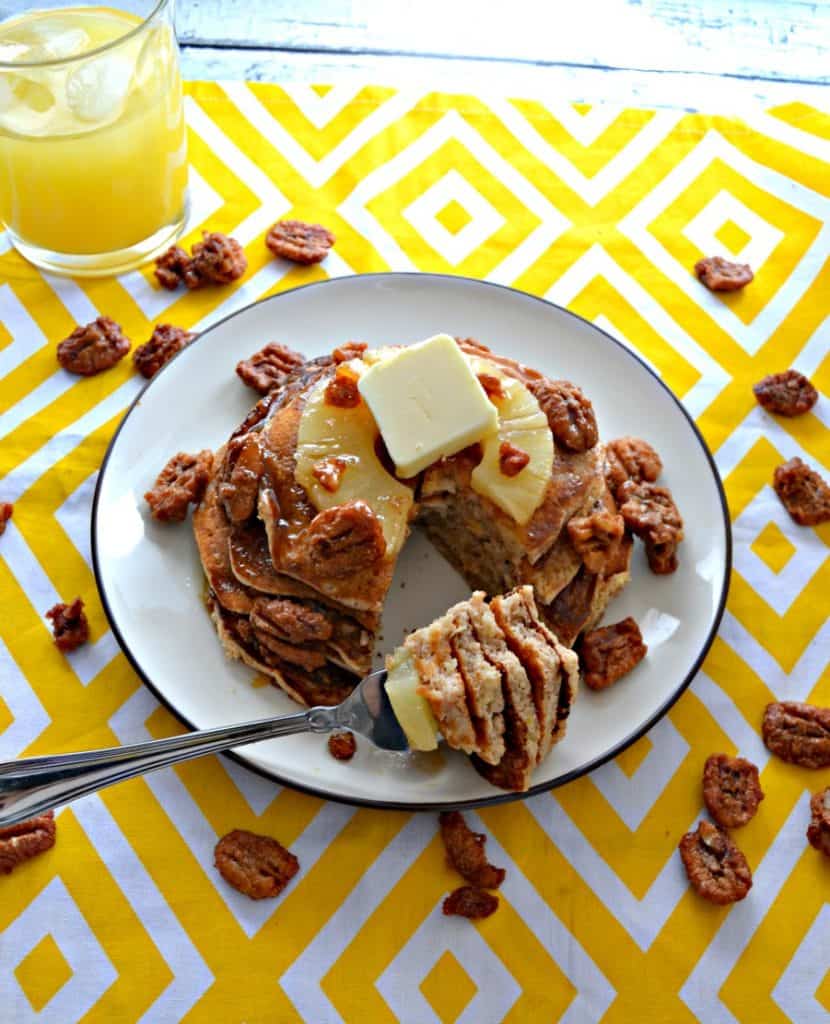 For the praline pecans:

For the pineapple syrup: 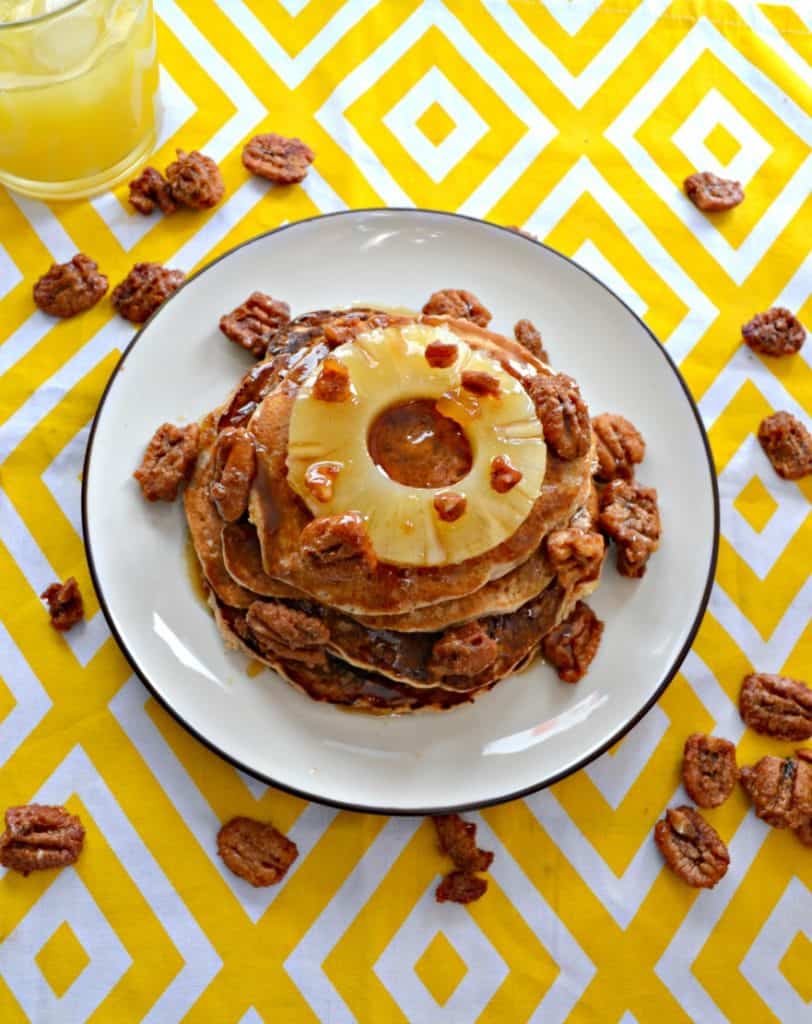