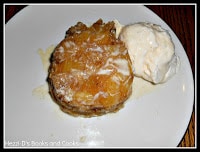 Frank and I were lucky enough to go to Hawaii on our honeymoon.  Neither of us had been there before and we had the most amazing time.  We spent 4 days in Oahu and then 6 days in Maui.  Hawaii is absolutely gorgeous and I would go back in a second.

While we were there we ate at some pretty amazing places.  There was Roy's which has fantastic Hawaiian Fusion cuisine.  Then there was Mama's Fish House with the freshest, best fish I have ever eaten in my entire life, and then there was Pineapple Grill.  Our meal at Pineapple Grill was good but the most memorable part was the pineapple upside down cake.  It was moist, topped with rum-caramel sauce, and served with a scoop of macadamia nut ice cream.  It was absolute heaven.  The best dessert we had in Maui.

Once we were back in Maryland we kept thinking of that pineapple upside down cake.  Frank happened to mention it to our friend Cyndi who goes to Hawaii every year.  A few weeks later when I was having a crappy week I found a package when I arrived home.  Inside she had sent me an individual pineapple upside cake pan along with the recipe for pineapple upside cake from Pineapple Grill!  Could she be a better friend???

A few weeks later my brother was coming to town so I made these treats for dessert.  They were moist, buttery, and full of pineapple.  The caramel-rum sauce is thick and gooey.  I couldn't find macadamia nut ice cream so we just had plain vanilla.  These cakes are amazing!  They are very close to the original and I bet if I had bought macadamia nut ice cream it would have been the perfect match.  These are my new favorite cakes and I can't wait to make them again!

2.  In a medium bowl combine the flour, salt, and baking soda.  Set aside. 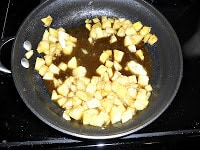 3.  In a large bowl cream the butter and sugar using a mixer.  Add in the egg and mix for 1 minute.

4.  Add the dry ingredients into the mixing bowl and mix on low speed until everything is well combined.

5.  Using a spatula fold in the sour cream and vanilla.  Set aside.

7.  Spray 6 mini pineapple upside cake molds (or 8 large cupcake cups) with cooking spray.  Place 2 tablespoons of the pineapple mixture into each mold and then top with the cake mixture filling the mold ⅔ of the way full. 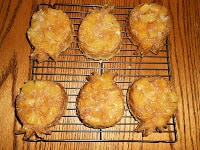 8.  Bake for 30-35 minutes or until the cakes are brown.  Remove from oven and cool on a wire rack for 10 minutes before removing them from the mold.

9.  In a saucepan over medium heat combine the butter, sugars, corn syrup, and cinnamon.  Bring the mixture to a boil.

10.  Add the rum to the boiling mixture and light on fire to burn off the alcohol.

11.  Remove from heat and stir in the heavy cream, mixing well.

12.  To serve the pineapple cake place the cake in the middle of a dessert plate.  Pour a few teaspoons of the rum sauce over top of the cake.  Serve with a scoop of ice cream. 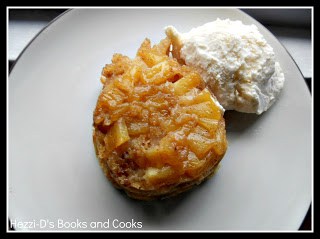