IT’S THE MOMENTS FROM OUR PAST THAT BIND US.

Branch Manager Emilie Davis is having a day like any other–until two masked men storm into WestOne Bank demanding cash. Her hopes of a quick end to her terror are dashed when she realizes one of the men has no interest in the bank’s money. Emilie is his prize, and he’s come to claim her.

When hostage negotiator Nathan Madigan and Las Vegas SWAT enter the bank on a rescue mission, Emilie’s captor makes a shocking escape into the abyss that lies beneath the city: the Las Vegas storm drains, a refuge for the downtrodden and the desperate.

HOW WILL IT END?

Who is the man the media has dubbed the “Taker?” Why is he after Emilie, and what is the connection he’s convinced they share?

Emilie can’t run from the Taker, and she can’t escape her own past. As her life closes in on her, she has nowhere to turn but to Nathan. The lines of professionalism blur as Nathan becomes determined to save Emilie. Together they venture into the depths beneath Las Vegas and discover a shocking piece of the puzzle.

But the Taker remains one step ahead. Desperate for the threat to emerge from the shadows, Emilie makes a bold move to reclaim her life, and it may cost her everything.  (-synopsis from Goodreads) 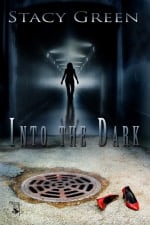 I enjoyed this book from start to finish.  The characters were well developed.  Emilie is a strong female character who needs someone to lean on but when she doesn't the answers she wants she goes looking for them herself.  She's had a lot of obstacles in her life but she keep fighting through them.    Nathan, the hostage negotiator, is a good guy trying to deal to deal with the guilt brought on by the death of his uncle.  The two are perfectly paired for each other and things begin to heat up as the book goes on.

The last main character is The Taker.  He is gentle, silent, and obsessed with Emilie for reasons the police cannot figure out.  He'll do whatever is in his power to take Emilie and make her his.  When the kidnapping at the bank goes wrong, he begins leaving her notes and even resorts to murder of someone she knows in order to get her attention.

As the book went on I thought I knew who was helping the Taker with his insider knowledge but when it all came down to it I had no clue!  The last quarter of the book was filled with so many twists, all of which were explained so they made perfect sense, that I couldn't turn the pages fast enough to finish!

I found this book to be suspenseful and it kept me wanting to read more.  There's even a little romance and drama thrown in on the side which makes this an all around good book.