Are you ready for some football?  Tonight's the Super Bowl!  While my favorite team, the Steelers, is not playing tonight, my husbands favorite team is so we'll be watching.  His number 1 team is the Baltimore Ravens.  So while it pains me to do so, for one night only I'll put on my purple and cheer his team on to a Super Bowl win. 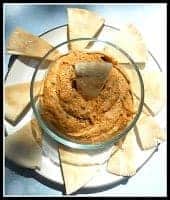 One of my favorite healthy snacks is hummus.  It's a tasty way to eat vegetables, pita chips, and pretzels.  The only issue I have is the price.  It's getting expensive to buy several containers of hummus every week.  While I love making my brother's bacon cheddar hummus, it has too much fat in it to eat all the time.

I also have a recipe for hummus that doesn't use tahini that is good, but it's not something I could eat all the time.  I've tried several other hummus recipes but none of those were very good.  When I saw that red bell peppers were on sale at the market this week for $4.00 for a bag of 7 I decided it was time to try roasting my own red peppers and making roasted red pepper hummus.

The recipe was incredibly simple.  The red peppers smelled amazing as they roasted in the oven.  I cooked them just until they were black on the edges. Roasted red peppers in a jar can be substituted instead of making your own but I think the flavors are better on ones that are roasted the day you make the hummus.  Then everything gets thrown into the food processor and is processed until smooth.  It's creamy and a bright red color.  There is a lot of flavor from the red peppers, garlic, tahini, and lemon.  This is the best hummus recipe I've made and it's one I'll be making frequently! 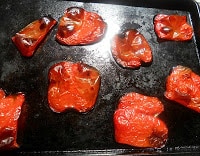 2.  Cut each red pepper into 4 big pieces and place on a baking sheet.  Drizzle with half of the olive oil.  Bake for around 20 minutes or until the edges of the peppers begin to blacken.  Remove from the oven and cut into pieces. 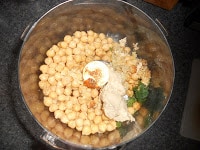 4.  Add in the garbanzo beans and tahini and process until smooth.

5.  Spoon into a bowl and refrigerate until ready to serve.  Will keep in the refrigerator for up to 4 days. 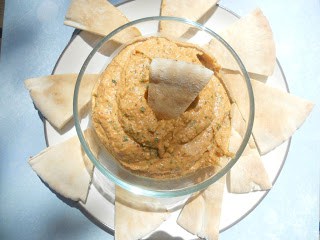