Beautiful women are dying in Fort Lauderdale from the bite of a black mamba, the deadliest snake in Africa. Then, during the feast of Saturnalia, a serial killer targets prostitutes during a cold winter in New York City.

Join Detective Jack Stenhouse, a seasoned professional with the Fort Lauderdale P.D., as he cruises the hot asphalt in his ’68 Hemi Road Runner. Follow Jack with his girlfriend Didi, a woman with a name to match her attributes, as he moves to the Big Apple and joins the First Precinct as the new recruit on duty.

Learn how the Shadow of Death accompanies Jack like an albatross around his neck. Find out if the Saturnalian Affect will cloud his judgment.

Now enter the mysterious world of Jack Stenhouse. If you dare… (-synopsis) 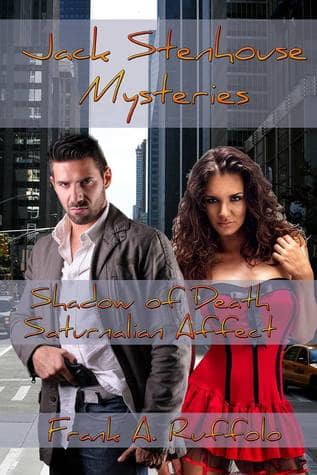 A body shows up on the beach and Detective Jack Stenhouse is called to the scene of the crime.   The woman has a snake tattoo on her back and two puncture marks on her neck.  It looks as though she's been bitten by a snake.  But not just any snake, and Black Mambo which are only found in Africa.

As Jack begins working the case he finds out that his girlfriend, stripped Didi, knew the victim.  They used to work together at the strip club.   While Jack is working the case the body of another woman is found and it's the same thing.   There's a snake tattoo on her back and 2 punctures on her neck.   Jack begins to think it might be related to their job as art gallery hostesses at Mambo.

To top it all off, there may be a cop involved.   Wayne is moonlighting as security for Mambo and isn't giving up as much information as his boss thinks he should be.   He seems like he's in a little too deep and isn't trying too hard to get out.

Will Jack be able to catch the man behind it all or will he have another dead body on his hands?

This book had it's ups and downs.   Jack is a likeable character who seems good at his job.  He does what needs to be done but still has some time for fun with Didi when he's not at work.  The problem I had with Jack is that I couldn't  imagine him talking the way he did in the book.   There were so many phrases with exclamation points, words, and phrases I just can't fathom would be used in the situations he was in.

I really liked Didi's character.  She seems like a woman who knows what she wants and sets out to get it.   While she works as a stripper, she's doing it for the money not because she doesn't have any other options.  She seems to really love Jack and will do anything she can to make him happy.

I found the storyline to be a little slow but it did go somewhere.  There were a lot of little side stories going on that didn't add much to the story and eventually I started skipping them and getting back to the murder mystery at hand.  The mystery itself was interesting and even though I knew who the killer was, it was fun trying to watch the police figure it out and then try to catch him at his own game.

Finally, the other thing I had some trouble with was the repetitiveness.   It was repeated over and over again that Didi had double D breasts.   I got it the first time but then got to read about it 10 more times.   It was not necessary to repeat it. I also read multiple times how Jack had to do the 3 S's before he left the house.  That's fine but did I really need to know he had to sh*t, shower, and shave more then once?

Overall this book was just ok for me.   I did like the main storyline and the mystery part of the book.  However, I'm not sure I would pick up another one of these mysteries unless the author would get rid of some of the fluff in the middle.