Have you ever made 300 cupcakes in one day?  No?  I hadn't either until I agreed to do the baking for a friend's wedding.  She wanted to have all local vendors and wanted cupcakes instead of a cake.  I was more then happy to help and had a few flavor combinations in mind.  The first two, Champagne Cupcakes and Chocolate Covered Strawberry Cupcakes, I had made before but the Lemon Cupcakes filled with raspberry I've only made in cake form.  Turns out there's  reason for that.

I did a trial run of the Lemon Cupcakes using my cake recipe but I didn't like the way they turned out.  I found another recipe and decided to use my King Arthur all purpose flour in these cupcakes.  This is the best flour to use when baking cakes and cupcakes because they come out perfectly every time. 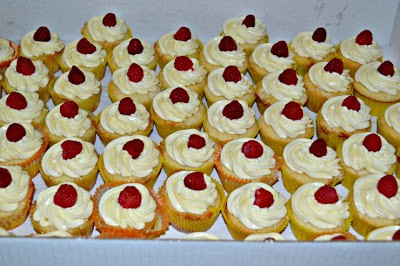 The cupcakes had both lemon juice and lemon zest in them to give them the lemon flavor.  My first batch wasn't great, I hadn't mixed them long enough, but the next 6 dozen came out great and smelling of lemon and sugar.  I quickly filled them with raspberry jam and frosted them with a lemon buttercream.  For decoration my friend just wanted a simple raspberry on top which I thought was perfect for a summer wedding.  These cupcakes were bright, fruity, and simply delicious.

For the filling:
½ c. raspberry jam

2.  In a medium bowl combine the flour, baking powder, and salt.

3.  In the bowl of a stand mixer beat the butter on medium speed until it is creamy and smooth.  Add in the sugar and beat for 2 minutes or until smooth.  Add the eggs one at a time, on low speed, until they are incorporated into the dough.

4.  Mix in the lemon zest, lemon juice, and vanilla.

5.  On low speed take turns adding the flour mixture and the milk until just blended.

6.  Fill each muffin cup ⅔ of the way full.  Bake for 20-23 minutes or until the tops begin to brown and a toothpick inserted into the middle comes out clean.

7.  Remove from the muffin cups and cool completely on a wire rack.

8.  Cut a hole in the middle of each cupcake and save the cut piece.  Place a teaspoon of raspberry jam in the hole then top with the cut piece of cupcake.  Repeat with remaining cupcakes.

9.  To make the buttercream place the sugar and egg whites in a heat proof bowl.  Place over a pan of simmering water and whisk constantly for 3 minutes.  The sugar should be dissolved and the mixture will be shiny.

10.  Remove the bowl from heat and pour into the bowl of a stand mixer.  Beat on medium speed for 5 minutes or until the mixture has cooled.  Add in the butter one stick at a time until the buttercream is thick and smooth, about 8 minutes.  During this time your buttercream may curdle or separate but just keep on beating it and it will come back together.

11.  On medium speed add in the lemon juice and vanilla.  Beat for an additional 1-2 minutes or until the buttercream is shiny and smooth.

12.  Use a piping bag and a large star tip and frost the cupcakes.  Before serving top with a fresh raspberry if desired. 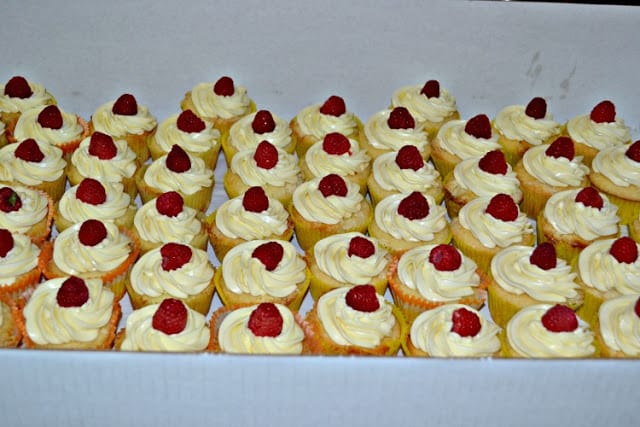