The Fallen Angels Book Club has only two requirements: the members must love books and have a white-collar criminal record. Hollis Morgan fits the bill. Left holding the bag in an insurance fraud scheme concocted by her now ex-husband, she served her time and is trying to rebuild her life. All she wants is for the court to pardon her conviction so she can return to law school.

After one of her fellow members is murdered in a scenario straight out of a club selection, Hollis is once again the subject of police scrutiny. Refusing to get stuck with another bad rap, she sets out to investigate her fellow club members. Is one of them really blackmailing the others? As a second member dies in yet another book-inspired murder, Hollis realizes that time is running out. Everything rides on her finding the killer--not just her career aspirations. She must identify the killer before she herself becomes the next victim. Everyone is convinced she knows more than she lets on. But what is it, exactly, that is she supposed to know?
The Fallen Angels Book Club is the first book in an exciting new mystery series featuring amateur sleuth Hollis Morgan. (synopsis) 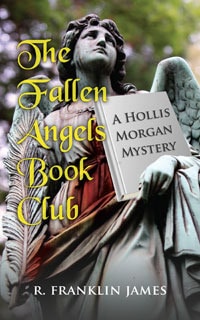 I found the idea of a book club with members who all have a criminal record intriguing.  I liked Hollis, the main character, because she was doing her best to get her life back together after she was lured into a white-collar crime by her now ex-husband.  She is a paralegal at a high powered law firm but does pro bono work at a elderly home on the side.

Her life seems to be getting back on track when one of the members of her book club is murdered.  It turns out that he is murdered in the same way the character in their last book club book was murdered.  The cops show up on Hollis' doorstep and soon she becomes a suspect.  Hollis known she can't go back to jail and will do anything to find out who the killer is.

As Hollis begins digging into the lives of her fellow book club members she finds an unlikely ally in an associate at work.  While she's searching for the murdered her ex-husband, the man who helped put her behind bars, starts calling and asks to see her.  Hollis can't imagine why he wants to speak with her and she hasn't gotten over her anger at having him put her in jail for his crimes.  But when she figures out he's somehow connected to the murders she agrees to see him just one more time.

It's a race against time as Hollis tries to find the murderer before going to her rehabilitation trial to clear her name.  The only problem is, the murderer is looking for her and she might just be his next victim.

R. Franklin James was born and raised in the San Francisco East Bay Area. She graduated from the University of California at Berkeley and completed the masters program in Public Policy at California State University East Bay. She has also received her paralegal certification. She and her husband live in northern California with their English Springer Spaniel, Bailey.

*I received a copy of this book for my honest review.*