This Tuesday is Fat Tuesday, otherwise known as Mardi Gras!   Mardi Gras is basically the end of carnival and the day before Lent begins.  It's sometimes called Fat Tuesday because it's the last day to eat the fattening foods before giving them up for Lent or fasting during Lent.  Although my religion doesn't require me to give up something for Lent, I almost always do. 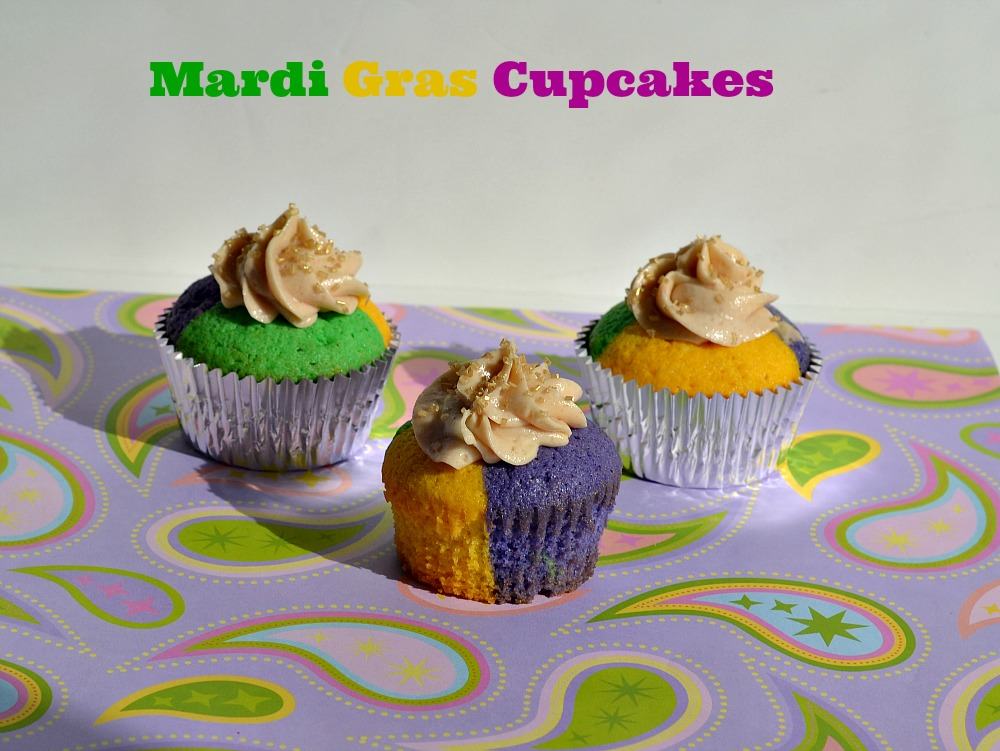 In the past I've given up potato chips, sweets, french fries, and and chocolate.  I'm not sure why I give up food every year other then it's something I really enjoy and that's the basic point of Lent...to give up something you enjoy.   Ten or so years ago my little brother gave up soda.  He hasn't had a soda since!  That one really shocked me because he was always drinking soda but he said he liked the way he felt when he wasn't drinking it.

So for Lent this year I'm giving up something I haven't ever give up.   I'm giving up soda.  It's going to be hard because I usually drink about 2 sodas a day and the only thing else I drink during the day is coffee or iced tea.  I've been looking to cut back on caffeine so I either need to get some decaf or start drinking water.   I am also going to give up some type of sweets; either cookies or cupcakes. 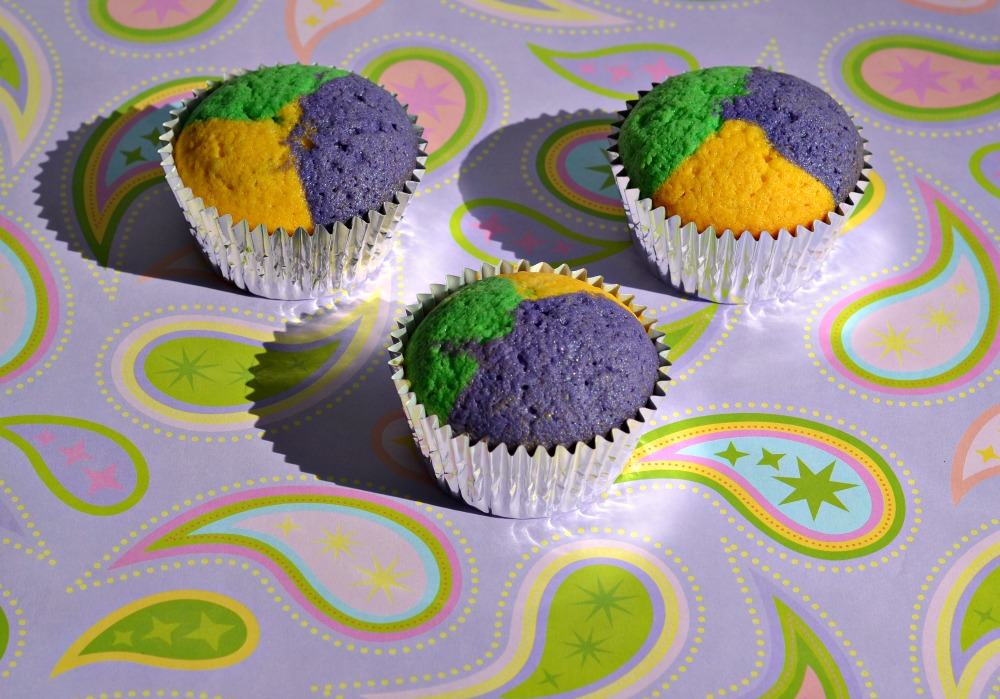 So to help celebrate the end of carnival and Mardi Gras, I'm sharing these delicious, fun, and festive cupcakes!  The best part of these cupcakes is that it's all about the look so you can use a homemade cupcake recipe or use a boxed mix...it doesn't matter!   I used a homemade vanilla flavored batter and dyed it the three colors of Mardi Gras which are yellow, green, and purple.  Then I topped it off with a luscious cinnamon frosting in honor of the King Cake, and topped it with some gold sprinkles.   These tri-colored cupcakes are sure to be a hit at any Mardi Gras celebration!

2.  Prepare the vanilla cupcake recipe according to the package directions.   Divide into 3 bowls.  Color one yellow, one green, and one purple.  Place a spoon in each batter. 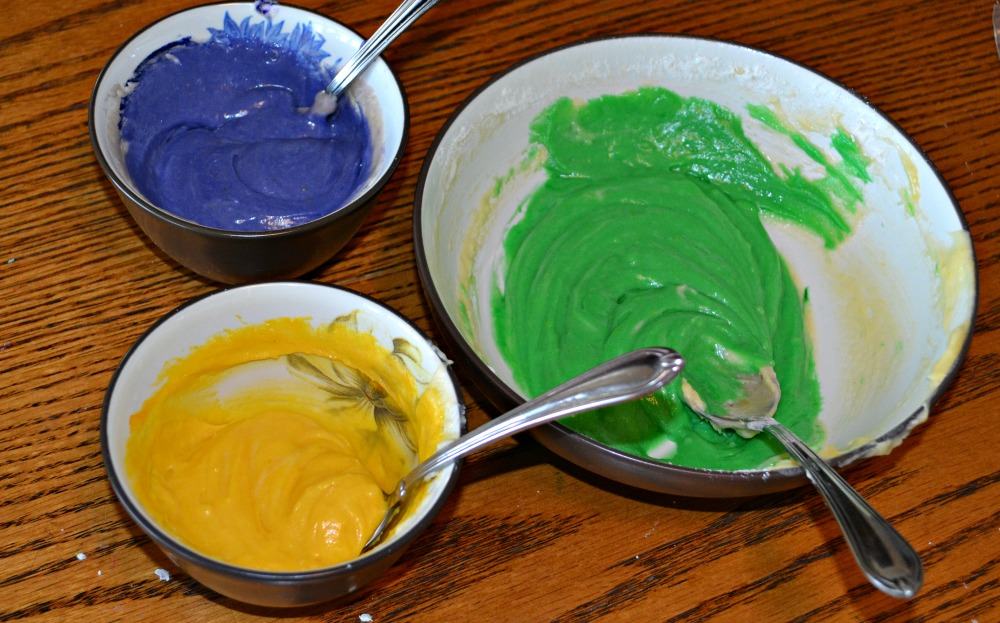 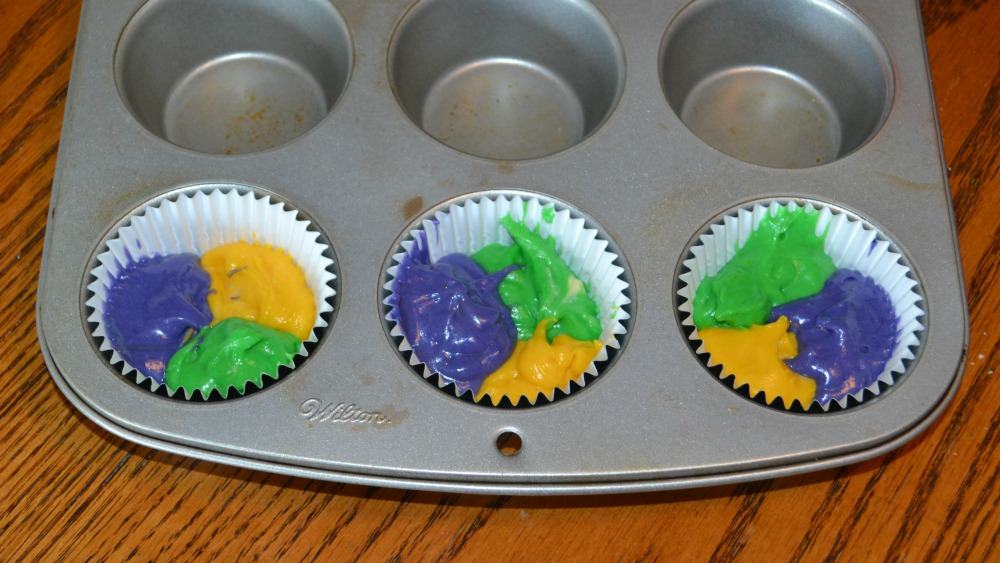 4.  Repeat these steps with remaining batter.  Bake the cupcakes according to package directions.  Remove from oven and cool on a wire rack for 20 minutes.

5.  In a large bowl mix the butter with a hand mixer on medium speed or until it is smooth.  Add in the powdered sugar, cinnamon, and vanilla and blend until smooth.  If the frosting is too thin add more powdered sugar.  If it is too thick add a little milk.

6.  Spoon the frosting into a piping bag and pipe a dollop onto the center of each cupcake.  Sprinkle with gold sprinkles. 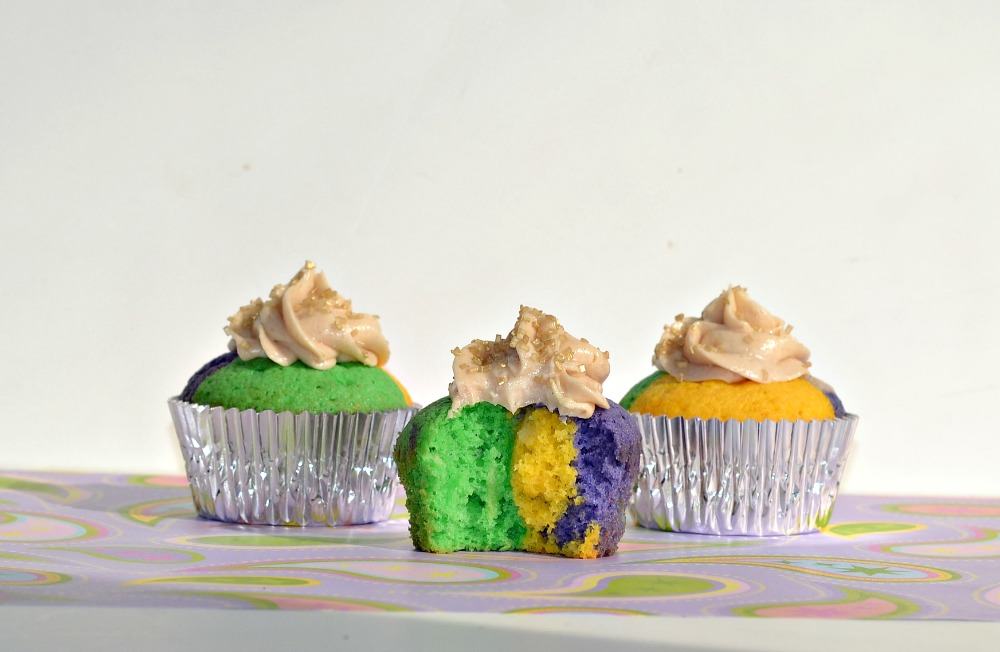