Broccoli cheese soup is one of my favorites.  The only thing I hate about it is the fat and calories.  Cream based soups are often high in both and broccoli cheese is no exception.  So when I was looking in my Taste of Home magazine and saw a healthier version (550 less calories and 54 less grams of fat) I was excited to try it.  Even better?  It was loaded with one of my favorite foods-potatoes! 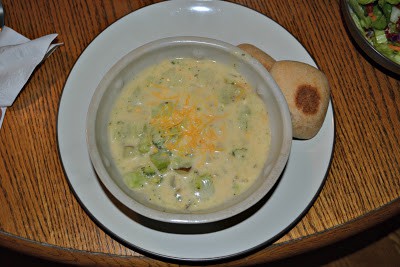 This soup was easy to make and was ready to eat in about 30 minutes.  The original recipe called for the soup to be pureed in the blender but I really like a chunky broccoli soup.  I also added in some cream cheese to thicken the soup and add some flavor.

Overall this was a hearty and tasty soup.  There were large chunks of both potatoes and broccoli and the soup was light on the creaminess but still had a delicious cheese flavor.  I served it with a tossed salad and whole wheat rolls for a complete meal.

1.  In a large pot combine the first 7 ingredients.  Bring to a boil then reduce heat to medium and cook for 15 minutes. 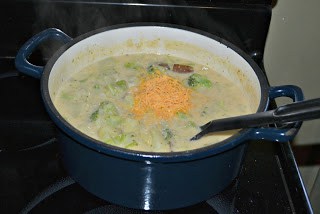 2.  Stir in the broccoli and return to a boil.

3.  In a small bowl whisk the flour and milk together until smooth.  Stir into the soup along with the cream cheese.  Mix well and cook for 3-4 minutes or until the soup has thickened.

4.  Remove the soup from the heat and stir in the cayenne pepper and cheddar cheese.  Mix until the cheese is melted. 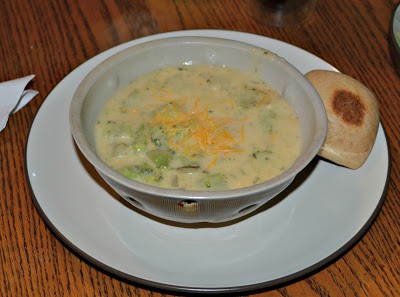