A ghost in Colonial dress has been wreaking havoc at an old plantation house in Virginia. The house is owned by Elizabeth Smithwood, the best friend of Ellen McKenzie’s Aunt Mary. Mary is determined to fly to the rescue, and Ellen has no choice but to leave her real estate business and new husband to accompany her. Who else will keep the old girl out of trouble?

When Ellen and Aunt Mary arrive, they find that Elizabeth’s “house” comprises three sprawling buildings containing all manner of secret entrances and passages, not to mention slave cabins. But who owns what and who owned whom?

After Monty—the so-called ghost and stepson of Elizabeth’s dead husband—turns up dead in Elizabeth’s house, suspicion falls on her. Especially when the cause of death is a poisoned glass of syllabub taken from a batch of the sweet, creamy after-dinner drink sitting in Elizabeth’s refrigerator. Monty had enemies to spare. Why was he roaming the old house? What was he searching for? To find the truth, Ellen and her Aunt Mary will have to do much more than rummage through stacks of old crates; they will have to expose two hundred years of grudges and vendettas. The spirits they disturb are far deadlier than the one who brought them to Virginia. Murder by Syllabub is the fifth book of the Ellen McKenzie Mystery series.  (-synopsis) 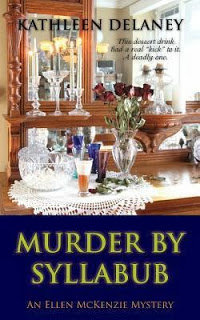 The story takes place on an old plantation in Colonial Williamsburg.  Elizabeth, the owner of the old plantation, thinks there is a ghost in her home.  She asks her best friend Mary and her niece Ellen to come to the house and help her solve the mystery of what is going on.  Only when the pair arrives the mystery turns to murder.

The main characters are all strong but elderly women.  Elizabeth is the owner of the plantation home and also the suspect in this murder.  Her sister-in-law Cora Lee has two sides to her coin.  She appears to love Elizabeth and be on her side most times, but there is also the sarcastic and sharp tongued side.  Throw in Ellen's Aunt Mary and there's a trio of elderly women prepared to defend the plantation home and everything in it.

The story takes a turn when they find out Noah, who lives on the plantation grounds, thought the house was going to be given over to Monty.  Monty is the one who turned up dead and now suspicion is turning over to him.  But when Noah's mother is attacked everyone knows it wasn't him who did it.

Ellen and Aunt Mary will have to dig through centuries of old grudges and hard feelings.  Time is running out to find the truth and solve the mystery of Monty's murder and the ghost in the plantation house.  Will they find the murderer before he/she finds them?  Or will the murderer find what he is looking for and claim the old house and its rich history for himself?