The Murders at Astaire Castle by Lauren Carr

Never tell Mac Faraday not to do something.

Spencer's police chief, David O'Callaghan, learns this lesson the hard way when he orders Mac Faraday to stay away from the south end of Spencer's mountaintop - even though he owns the property. It doesn't take long for Mac to find out what lies on the other side of the stone wall and locked gate, on which hangs a sign warning visitors to Keep Out!

Topping the list of the 10 top haunted places in America, Astaire Castle is associated with two suicides, three mysterious disappearances, and four murders since it was built almost a century ago - and Mac Faraday owns it!

In spite of David's warning, Mac can't resist unlocking the gate to see the castle that supposedly hasn't seen a living soul since his late mother had ordered it closed up after the double homicide and disappearance of Damian Wagner, a world-famous master of horror novels.

What starts out as a quick tour of a dusty old castle turns into another Mac Faraday adventure when Astaire Castle becomes the scene of even more murders. Mac is going to need to put all of his investigative talents to work to sort out this case that involves the strangest characters he has run into yet - including a wolf man. No, we're not talking about Gnarly. (-synopsis) 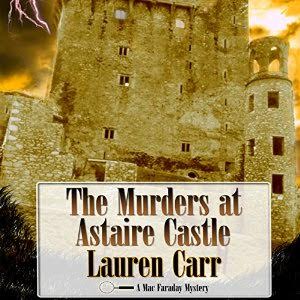 Let me start by saying that I was VERY excited when I started this book and found out that it takes place in Deep Creek, Maryland.  I mean, I live 40 miles from there and no one ever writes about this part of Maryland!   Since we go to Deep Creek frequently I found the entire book to be fun to read simply for that fact.   Not to mention that my small town was mentioned at one point in the book.

On to the story, Mac Faraday is a retired police office who inherited a lot of money from his mystery writer mother.  He know owns an entire mountain and the Inn on top of it.   In this book he learns that he also owns a castle on top of the mountain which he finds fascinating until he learns that the castle is surrounded by disappearances, murders, and the paranormal.

Mac goes to the castle with his best friend and chief of police David O'Callaghan.   David doesn't want him going to the castle but because he is going David wants to be there to protect.  What Mac doesn't know is that David hosted a party at the castle years ago and his friend Riley went missing during that party.

Exploring goes well until they get locked in a room in the castle.   While trying to get out they trip a door to a secret passage that shows them the way out.  The only problem is they trip over a dead body on the way out.  It's the body of famous horror writer Damian Wagner.  The problem with this is that everyone thought Damian killed his daughter and publicist and then fled with all of his money.  With his body found they now believe the killer is still on the loose.

The other surprise in the castle is the appearance of the Wolf Man.    The man jumps out at them and bites Mac's dog Gnarly.  The team gets the wold man out of the castle and David is haunted by the fact that it is his friend Riley who disappeared more then a decade ago.

The weird things don't stop there.  David and Mac begin investigating the old murders and the disappearances only to find themselves in the middle of more murders on the mountain.  Can they figure out who the murderer is before one of them ends up dead?

I really enjoyed reading this book.   The mystery of who the murderer was kept me guessing until the end.   I found it enjoyable to see how the characters were connected to one another and that while only one person was the murderer, others contributed to the cause of the murders.  It was suspenseful and fun to read.

I liked both David and Mac.  They are very different people but both are good investigators and both are fiercely protective of the people they care about.  While they may be different they work really well together.

Gnarly the dog is also prominently featured in the book.  He is a smart dog who often finds himself in bad situations.   He was discharged from the army and the army won't tell Mac why.  In this book Gnarly finds himself a female dog that he becomes infatuated with which is a fun side story.

If you are a lover of good mysteries and suspense novels then make sure to check out this book!  I can't wait to read the next one in the series!