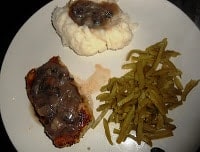 I firmly believe that everyone should have at least two simple but delicious gravy recipes in their arsenal.  Gravy can be used on a wide variety of foods and a good gravy can simply enhance the flavors.  I've had some good mushroom gravy in the past but I've also had some really salty and gross ones.

This mushroom gravy cooks up in under 30 minutes.  The fresh herbs and mushrooms lend a delicious flavor to the finished gravy.  The red wine gives the gravy a rich flavor and the chicken broth rounds it all out.  The gravy is not too salty and is filled with flavor unlike the gravy that can be bought in the store.  The mushrooms really shine through.  This gravy is great on beef, chicken, or turkey.  We also served it on top of our mashed potatoes as well. 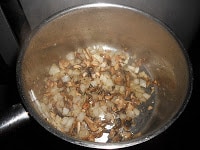 1.  Heat the oil in a large saucepan over medium high heat.  Add in the onion and saute for 2 minutes.  Add in the sage, rosemary, salt, pepper, and mushrooms.  Cook for 10 minutes or until the mushrooms are browned.

2.  Pour the wine into the pan and let cook 1 minute or until most of the liquid evaporates.  Stir in the chicken broth and cook for 10-15 minutes or until it reduces to 2 cups.

3.  Combine the flour and water in a small bowl and stir until smooth.  Add the flour mixture to the saucepan and return to a boil.  Simmer for 3-5 minutes or until gravy has thickened.  Remove from heat and stir in the butter. 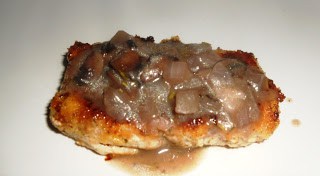