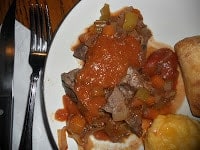 After 10 years of teaching I finally had a spring break this year!  I've never had one before and I was really looking forward to having 10 days off from work.  While many of my colleagues had vacations on the brain my mind was on the kitchen.  For a week ahead of time I made a long list of things that I've been wanting to cook or bake but haven't had time to do.  I accomplished almost all of them surprisingly.
One thing on my list was Company Pot Roast.   I know you are probably wondering why a pot roast made it on my to do list but the reason was a simple one.  The pot roast needs to cook in the oven for 2-2 ½ hours and I just don't have that kind of time after work.  There's also a but of prep work to be done with all the chopping of the vegetables.
Once everything is chopped and placed in the pan it's a waiting game until two hours have passed.  Then a sauce is made from the veggies and drippings in the pan.  The sauce was thick and tasted of vegetables and herbs.  It went perfectly with the pot roast and the rest of the vegetables.  The vegetables and pot roast cook in a red wine and tomato sauce which gives the pot roast some much needed flavor.
Company Pot Roast  (adapted from Delightfully Dowling)
1 (3-5 lb.) boneless beef chuck roast
1 t. sea salt
1 t. black pepper
¼ c. flour
2 T. olive oil
1 c. carrots, chopped
1 onion, chopped
1 c. celery, chopped
2 leeks, white & light green parts
5 garlic cloves, minced
1 ½ c. merlot
1 (28 oz) can whole plum tomatoes in puree
1 c. chicken stock
1 t. thyme
1 t. rosemary
1 t. black pepper
1 T. butter
2 T. flour
1. Preheat the oven to 325 degrees. 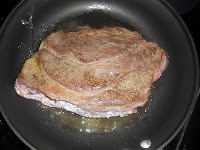 2. In a large skillet heat the olive oil over medium high heat.  Sprinkle the roast with salt and pepper then dredge through the flour covering all sides.
3. Place the roast in the skillet and sear on one side for 4-5 minutes or until nicely browned. Flip the roast and sear on the other side.  Turn and sear the ends as well. Remove the roast and place in a 9 x 13 baking dish or a roasting pan. 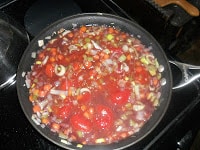 4. Pour 1 T. olive oil into the skillet.  Add in the carrots, onions, celery, leeks, garlic, salt, and pepper and cook over medium heat for 10-15 minutes, stirring occasionally.
5.  Add the wine to the vegetables and bring to a boil.  Stir in the tomatoes, chicken stock, and additional black pepper to taste.
6.  Pour the mixture over top of the roast in the pan and sprinkle with rosemary and thyme.  Cover with foil and bake in the over for 2 hours or until a meat thermometer reads 160 degrees.  Reduce the temperature to 250 degrees after about an hour to keep the sauce at a simmer. 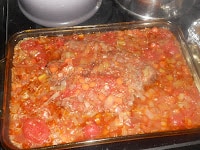 6. Remove the roast to a cutting board and slice.  Transfer half of the vegetable and sauce mix to a food processor and puree.
7.  Put the puree in a saucepan over medium heat.  Add in butter and flour and simmer for 5 minutes.  Add salt and pepper if needed.
8.  Serve the sliced meat with the sauce over top of a spoonful of vegetables on the side. 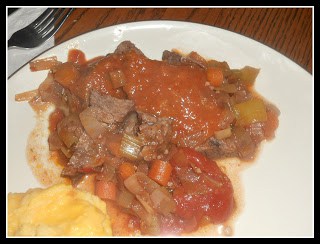