Notice anything different about my blog today?  After almost 3 years of going under the blog address http://hezzi-dsbooksandcooks.blogspot.com I've switched over to my own .com!  Make sure you update my blog address in your reader as the new address is www.hezzi-dsbooksandcooks.com.  I'm super excited to share my new domain with you!  Speaking of new things, what until you see what I have for you this week for #SundaySupper.

For the past two years I've made a list of things I wanted to accomplish during the year.  Since I'm 32 this year my list consisted of 32 items, many of them cooking related.  So when I found out the theme for #SundaySupper this week was to tackle something new in the kitchen I really wanted to knock something off my list. 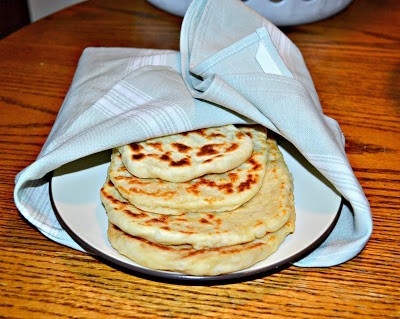 I decided on Naan because I've seen several delicious looking recipes recently plus I heard someone talking about Naan pizza and just knew I had to try it!  This is an easy bread to make because it only rises once and then is cooked in a skillet.  I wasn't sure about the skillet method but it made the Naan golden brown and delicious.

It reminded me of flatbread and I think it would be great to use for a sandwich or wrap.  We really enjoyed it as a base for a pizza.  It was sturdy enough to hold them topping and was perfect for dinner.  I'm so glad I tried this recipe.  It's much easier and faster to make then many other breads and it's so versatile I know I'll be making this recipe a lot in the future!

1.  In a large bowl combine the yeast, sugar, and water.  Stir to dissolve then let sit for 5 minutes.

3.  Slowly mix in the flour, a half cup at a time, along with the salt and pepper.  Mix until the dough comes together and then remove from the bowl and knead for 5 minutes.

4.  Return the dough to the bowl and cover with a towel.  Allow the dough to rise for 1 hour, or until it doubles in size.

5.  After the dough has risen, flatten it out and cut it into 8 pieces.  Shape each piece into a ball.  Roll each ball into a ¼ inch thick pancake shape that is 6 inches in diameter. 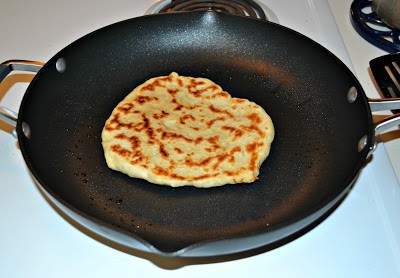 3.  Place on a baking sheet.  Bake for 10 minutes or until cheese is melted.  Serve hot. 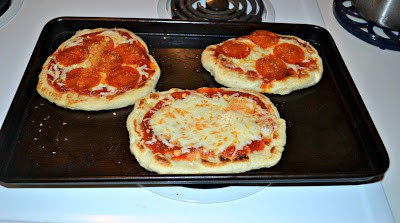 These are the dishes that our contributors have been dying to declare victory over.

Join the #SundaySupper conversation on Twitter on Sunday, April 28th to talk all about citrus recipes! We’ll tweet throughout the day and share recipes from all over the world. Our weekly chat starts at 3:00 pm AKST/7:00 pm EST. Follow the #SundaySupper hashtag, and remember to include it in your tweets to join in the chat. Check out our #SundaySupper Pinterest board for more delicious recipes and food photos.