The March 2014 Daring Bakers' challenge was hosted by Rebecca of BakeNQuilt. She challenged us to learn to make classic nougat and to make it our own with our choice of flavors and add-ins. After reading the recipe it seemed like this was something I could make in a morning so I planned to make it on a Sunday morning. 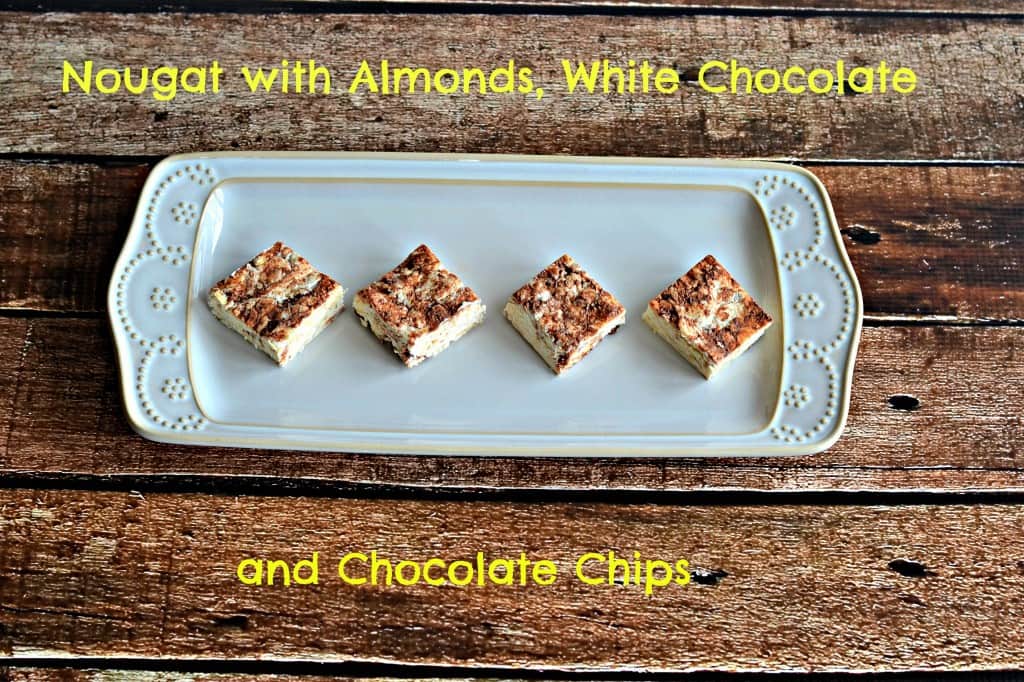 I prepared all of the ingredients, got my KitchenAid mixer out, got the mix ins ready and thought I was good to go.   Everything started out well.  I placed the eggs in the mixer and the syrup ingredients on the stove.  I had no trouble getting the syrup up to temperature.

Just when I thought everything was going well disaster struck.  When I started pouring my syrup into the eggs the syrup immediately hardened and the beater started hurling it against the bowl.  I thought my pour mixer was going to break.  I immediately turned off the mixer and didn't know what to do.  I thought I had ruined the nougat.  I was ready to throw in the towel when I thought I'd pour in some more of the hot syrup and hope for the best. 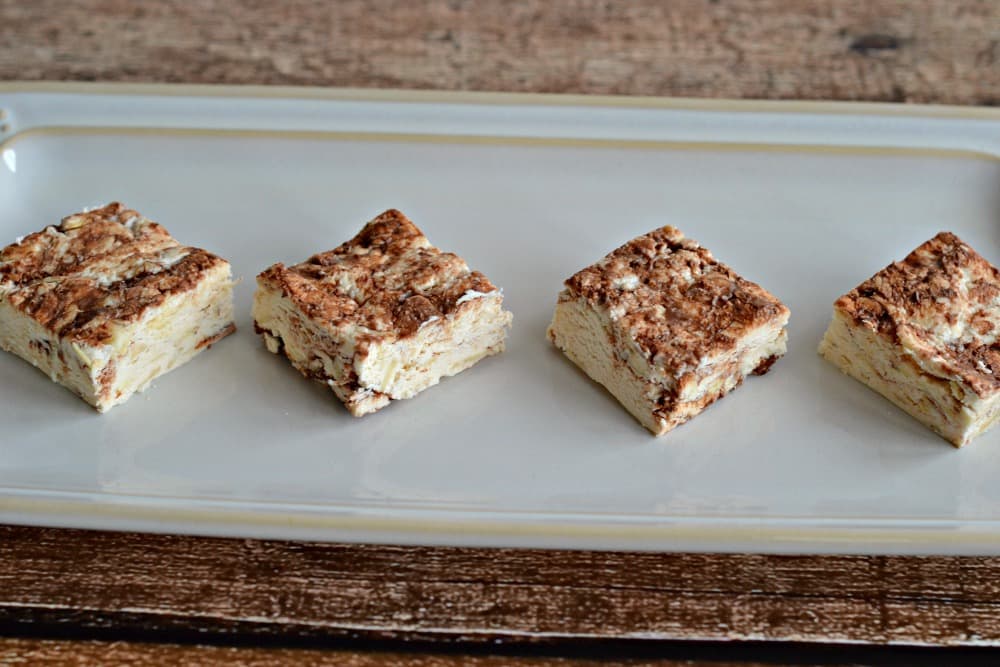 Turns out the remaining hot syrup worked to soften what was in the bowl and the nougat finally came together.  Whew!  Disaster adverted.   So the nougat whipped up just fine and I mixed in the almonds without any problems.  When I mixed in the white chocolate and chocolate chips some of them melted and made swirls in the nougat but the rest stayed firm.

The nougat firmed up in about 30 minutes and when I sliced it up it looked beautiful!  The swirls of chocolate and white chocolate looked beautiful along with the almonds.  The taste was amazing too.  It's reminiscent of the nougat you get in candy bars but much sweeter and the nougat almost melts in your mouth.  It's delicious and I can't wait to try the chocolate nougat next! 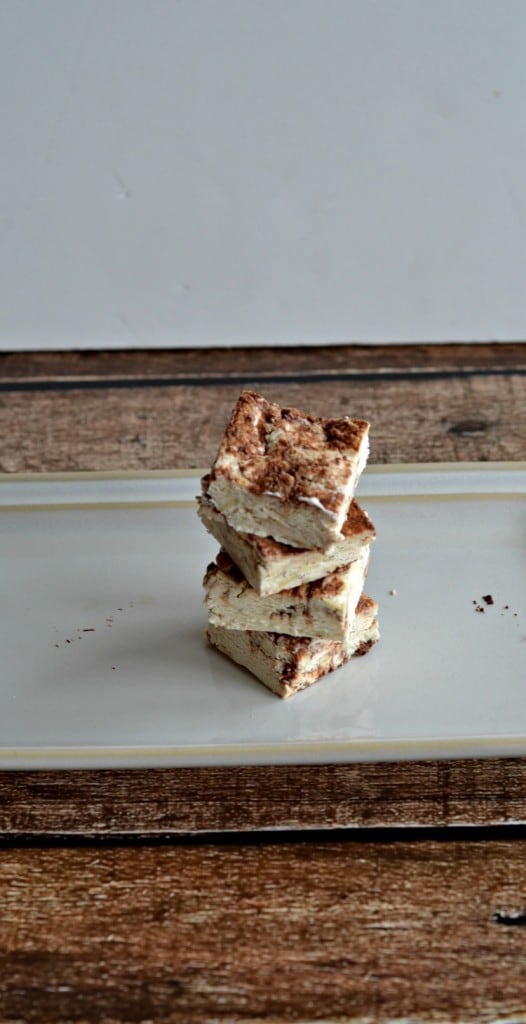 1.  Place the toasted almonds in a baking dish and put in an oven at 250 degrees until needed.

3.  In the bowl of a mixer combine the egg whites, sugar, and cream of tartar.  Do not begin mixing yet.

4.  Heat the honey in a small saucepan until simmering.

5.  Combine the remaining syrup ingredients (sugar, corn syrup, water, and vanilla) in a large saucepan.  Bring the sugar mixture to a boil and add a candy thermometer.  Cook, without stirring, until the syrup reaches 290 degrees.

6.  Once the syrup reaches 290 degrees, start whipping the egg whites on high speed and move the syrup off the heat.

7.  Pour the honey into the syrup mixture then put the pan back on the heat until the mixture reached 290 degrees. 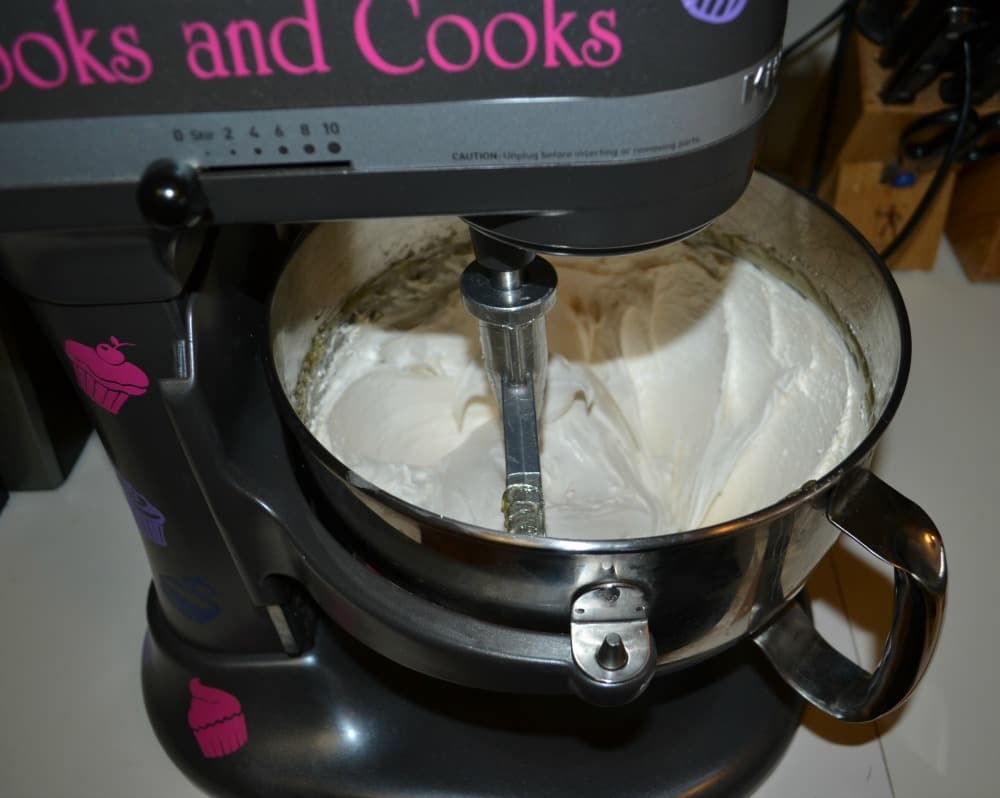 8.  With the mixer beating the egg whites on medium high, slowly pour the hot syrup into the egg whites, letting it run down the inside of the bowl.  Whip on high for 3 minutes.

9.  Add in the melted butter and mix just until the nougat is smooth.

10.  Remove the bowl from the mixer.  Take the hot nuts out of the oven and add them to the nougat.  Quick mix with a spatula until the almonds are evenly distributed.

11.  Sprinkle in the chocolate and white chocolate chips and fold in just until combined.  Some of them will melt and that's ok. 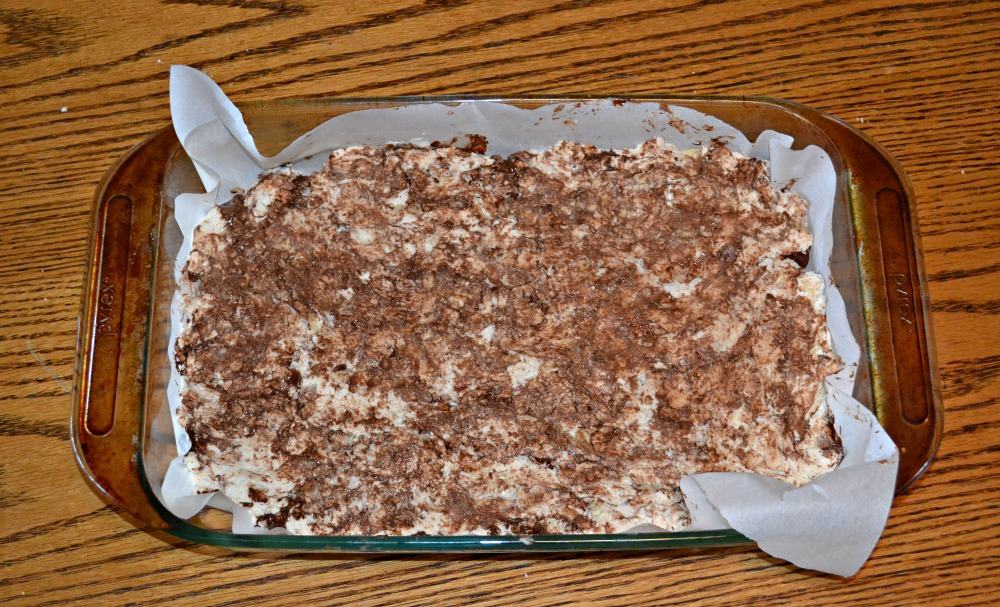 12.  Quickly pour the nougat into the prepared pan.  Use another piece of parchment paper to smooth it into the pan.  Allow to cool for 30-35 minutes or until it's just warm to touch.  Do not let it cool completely or it will be difficult to remove from the pan.

13.  Place the nougat on a cutting board and cut into 40 squares.   Wrap the nougat individually or store in an air tight container in a single layer. 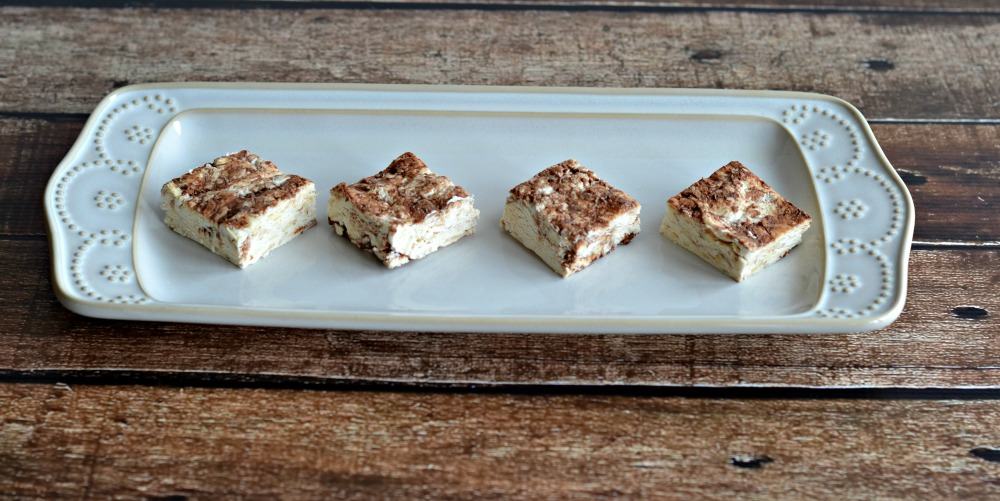