Do you ever have a day where you wish that dinner would make itself?  Last week I came home from work and it was cold outside, I was exhausted, and I wanted nothing more then to put my jammies on and crash on my couch.  So I did!  Unfortunately 6:00 came quickly and I just didn't want to make dinner.  I looked in the refrigerator and found the Jack Daniels Glaze I had made several days earlier.  Going on the fact that my cousin and I used to love crispy chicken strips with the glaze I gave it a go! 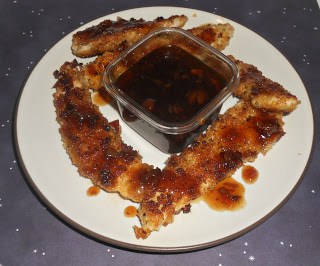 I used panko breadcrumbs simply because they make a crispy crust then regular breadcrumbs.  I cut my chicken breasts into thin strips and dipped them in the mixture.  They pan fried quickly and then I simply put them on a plate, drizzled them with the glaze, and put more of the glaze on the side as a dipping sauce.

It was awesome!  The chicken strips were crisp and flavorful and the Jack Daniels Glaze was sweet and delicious on top of it.  I couldn't resist dunking each and every morsel into the glaze.  My husband wasn't sure if he would like it but he ended up liking it as much as I did.  In fact, and I hate to admit this, I even ate a spoonful of the glaze after I had finished my chicken.

2.  Cut the chicken breasts into long, thin strips.  Set aside. 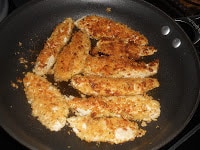 3.  Combine the eggs in a shallow dish and beat well.

4.  Heat the olive oil in a large skillet over medium high heat.

6.  Place the chicken in the pan and heat for 3-4 minutes on each side or until the strips are golden brown and the chicken is cooked through.

7.  Remove the chicken from the pan, drizzle with a tablespoon of heated Jack Daniels glaze, then serve with the remaining glaze as a dipping sauce. 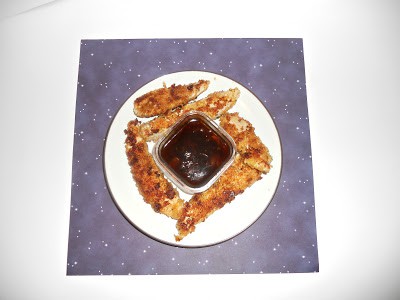