The Soupmaker’s Kitchen is a complete guide to making soups, broths, potages, minestra, minestrone, bisques, and borscht. Learn how to set up your kitchen to use your ingredients most optimally—from saving vegetable scraps for stock to tips on freezing finished soups. Explore more than 100 soup recipes, plus variations on each one, from all over the world, and in every style of soup you might want to eat. Recipes include: 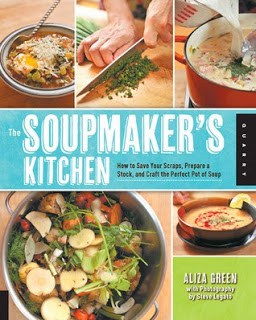 —Cream of Cauliflower with Nutmeg and Chives

Focus on fresh ingredients and learn how to use every part of them to minimize waste, save money, and maximize flavor with The Soupmaker’s Kitchen!

Looking at this book the first thing that captured my attention were the beautiful photographs.  Everything looked so bright and beautiful.  I love that the recipes feature fresh ingredients and are simple to make.

The first chapter in the book covers making homemade stocks which are easy to make and can end up saving you a ton of money!   This book has many of the classic soup recipes along with some unique soups from other cultures.  A few that I can't wait to try are the Thai Chicken Coconut Soup, Tomato Bisque with Basil and Fennel, and Vietnamese Pho Soup.  (synopsis of The Soupmaker's Kitchen by Aliza Green) 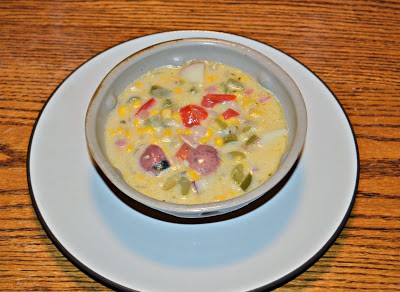 This past weekend was really cold so I was excited to have a reason to open up this book and pick a soup.  I didn't want to go out grocery shopping so I chose one that sounded good and that I had all of the ingredients for.  The one I chose is a Pennsylvania Dutch Bacon, Corn, and Potato Chowder.  This seemed fitting since I'm from Pennsylvania.

I have to say that I was very pleased by the large amount of fresh vegetables in the soup.   They really worked to brighten up the light cream base.  The bacon added a ton of flavor to the soup as well and it smelled incredible as it was cooking.

I found this chowder to be lighter then many chowders I have tried and for that I was glad.  I often feel like chowders weigh me down.  This one was filling without the added weight and the flavors of the bacon, vegetables, and cream complimented each other nicely.

1.  Saute bacon over low heat in a large soup pot until most of the fat is rendered.

2.  Add the onion, celery, red and green pepper, and simmer until tender but not browned.  Stir in the flour and cook for 3 to 4 minutes to cook out the raw taste.

3.  Add the vegetable stock and potatoes and cook all together until the potatoes are soft, about 10 minutes, stirring to combine well so the soup thickens evenly without developing lumps.

4.  Bring the soup back to a boil, stirring to make sure it doesn't stick or burn.

5.  Add the corn, stirring to combine.  Cook about 5 minutes or until the corn is cooked through.

6.  Pour in the hot milk and cream, stir to combine, and season to taste with salt and pepper.

7.  Serve garnished with thinly sliced chives, if desired, and serve. 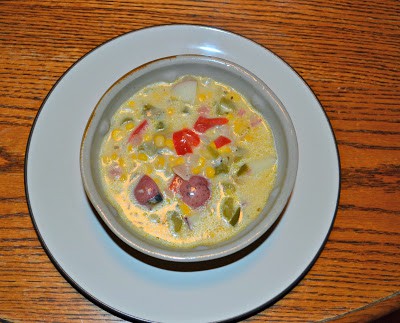