I've been wanting to make Monkey Bread for a while.  It's on my 31 by 31 list and every time I've gone to make it, I've decided on something else instead.  I think it's because I was looking at the cinnamon and sugar version.  When I found the pepperoni pizza version my tuned changed immediately.  I couldn't wait to make it as an appetizer for a party. 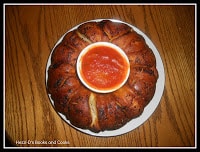 We were having friends over to watch football when I finally ended up making it.  It's easy to make and it looks pretty as well.  I know there are recipes for making the dough from scratch but I just used Pillsbury biscuits.  Cheese and pepperoni are added to the biscuits and then the ends are pinched together and placed in a bundt pan.  Butter is brushed over top and Italian seasonings sprinkled over the whole thing.

The completed monkey bread was a deep golden brown and smelled like fresh bread.  Each little bundle was filled with melted cheese and pepperoni.  I served it with warm marinara dipping sauce.  It was gobbled up in no time!  The only thing my husband said would make it better is to double the amount of pepperoni I put in each bundle so I'll make sure to do that next time.

2.  In a small saucepan combine the butter and garlic.  Mix until the garlic just starts to brown.  Remove from heat and brush the inside of a bundt pan with the butter.

3.  Split the biscuits in half.  Place 2 pieces of pepperoni on each biscuit and sprinkle with cheese. 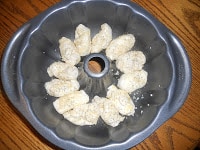 5.  Place the rest of the dough balls in the bundt pan and brush with the remaining butter and Italian seasoning.

6.  Bake for 25-35 minutes or until the monkey bread is golden brown.  Remove from the oven and cool on a wire rack for 10 minutes.

7.  Use a butter knife and go around the edges of the bundt pan.  Place a pan over top and flip it over to release.  Heat the marinara sauce in the microwave and place in the middle of the monkey bread.  Enjoy! 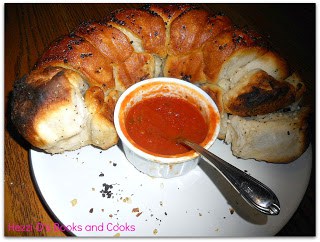