What's a celebration without cake?  For my third day of my blogiversary celebration I'm sharing this delicious cake I made for my brother last month. 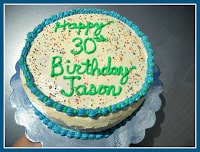 Last month my little brother turned 30!  I can't believe how old it made me feel that he turned 30 in June.  This has actually been a big birthday year all around in my family.  My little cousins Greggy and Johnna both turned 10 this year and my cousin Kelly turned 13.  My brother turned 30, my cousin's husband, Dan, and my Aunt Mindy turned 50, and my dad turned 60!  Then there's my great Uncle Steve who will be 103 in November-nope no joke. 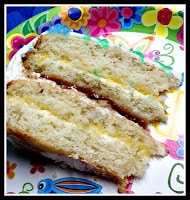 For my brother's birthday I decided to make him a birthday cake.  Earlier in June I canned some lemon curd and he decided he wanted that as part of the filling along with a rhubarb filling.  I made strawberry rhubarb jam and orange rhubarb jam and he went for the orange rhubarb.  We ended up pairing it with a white cake and fluffy vanilla bean swiss meringue frosting.  The cake turned out beautifully.

The flavors just plain worked together.  The citrus in the rhubarb jam went well with the sweet but tart lemon curd.  The cake was fluffy and white.  The frosting was sweet with strong vanilla notes.  My family gobbled the cake up at my brother's birthday party and my uncle even went so far as to say he wanted the exact same cake for his birthday!  I loved the flavors of this one and can't wait to try it with the strawberry rhubarb filling next time.

1.  Preheat the oven to 350 degrees.  Line the bottom of two 9 x 2 inch round cake pans with parchment paper.

7.  Divide the batter into the two prepared cake pans and bake for 30-35 minutes or until the cakes are springy to the touch and a toothpick inserted into the center comes out clean.

8.  Allow the cakes to cool in their pans for 5 minutes before running a butter knife around the edges and unmolding them.  Remove the parchment paper from the bottoms and turn them right side up on a wire rack.  Allow to cool completely.

9.  Meanwhile, place the sugar and egg whites for the frosting in a large heatproof bowl and fit the bowl over a pan of simmering water.  Whisk constantly until it feels hot to the touch and the sugar is dissolved.  Remove the bowl from heat.

10.  Pour the sugar mixture into the bowl of a stand mixer and beat on medium speed for 5 minutes or until it is cooled.  Add in the butter a stick at a time, beating until smooth.  Once all the butter is mixed in, beat the buttercream on high for 8-10 minutes.

11.  Gradually add in the vanilla.  Scrape the insides out of the vanilla bean and add them as well.  The resulting buttercream should be white and shiny.

12.  To assemble the cake use a large serrated knife to cut each layer in half, giving you four layers of cake. 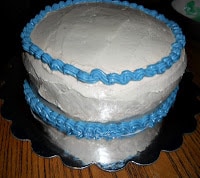 14.  Top the jam layer with another cake layer.  Spread a thin layer of buttercream on top followed by the remaining lemon curd.  Top with the final layer of cake.

15.  Use the remaining buttercream to from the sides and top of the cake using a spatula to smooth the frosting.  If desired reserve ¼ cup of the frosting for decorating.

16.  If using the frosting to decorate, add ½ cup of powdered sugar to firm it up.  Tint with gel food coloring and pipe onto the cake.

Note:  The cake can be refrigerated for up to 2 days but should be brought down to room temperature before serving. 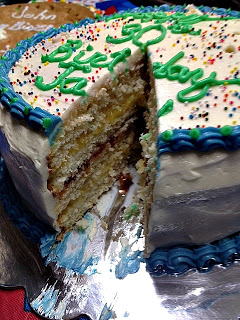