131 shares
It was extremely cold this past week and all my husband and I wanted was soup. I wanted potato soup, but he wanted something a little different. I scoured my cookbooks and came up with potato leek soup. I’ll admit-I’ve never had a leek before. I’ve seen them, but I wasn’t sure what they tasted like or how to cook them. I looked up some information on them and found that they are a member of both the onion and the garlic families. They look like green onions on steroids and smell like them too. 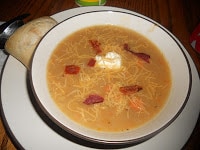 The recipe I made didn’t call for much other then the potatoes and leeks but I added in some carrots to give it color and a little white wine to add in some flavors. The combination of potatoes and leeks made for a tasty soup. I topped the soup with a spoonful of sour cream and fresh chopped chives. The sour cream gave the soup a rich bite and the chives added a bit of flavor. This is an easy, delicious soup that I’ll definitely keep in my recipe box to use again. 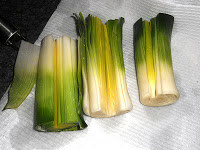 1. In a crock-pot combine the chicken broth, water, leeks, potatoes, carrots, and pepper. Heat on low for 6 hours.
2. Remove 4 cups of the soup to a food processor and blend until smooth. Place back into the soup then add the wine, thyme, and rosemary. Mix well.

3. Heat for an additional 2 hours.

4. Spoon soup into a bowl. Place a spoonful of sour cream in the middle of the soup and top with fresh chives. 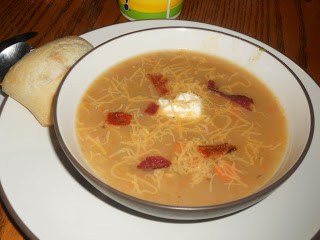 This post linked to:
Tempt My Tummy Tuesdays, Totally Tasty Tuesdays
Made From Scratch Tuesdays, Tuesdays at the Table