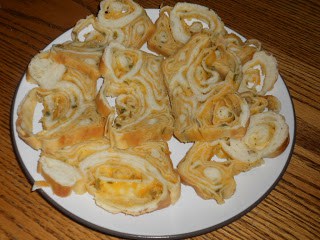 The Daring Baker's October 2011 challenge was Povitica, hosted by Jenni of The Gingered Whisk.  Povitica is a traditional Eastern European Dessert Bread that is as lovely to look at as it is to eat!  When I first saw the gorgeous pictures of Jenni's Povitica I thought it was going to be extremely difficult and time consuming to make.  I was apprehensive about making it and put it off for a few weeks.  I finally got around to making when my brother came to town because he wanted jalapeno cheddar bread and I thought I could make that work in the Povitica.

I got to work the morning my brother was coming.  I was making a half recipe which makes two loaves and I wanted one sweet and one savory.  The dough came together easily and only had to rise one time which was nice.  I was worried about rolling it out into a huge rectangle, but the dough was soft and easy to work with.  I didn't have any trouble stretching the dough to the length and width I wanted.  I made a savory filling of jalapenos, cheddar, butter, and milk for one bread, and cranberries, orange peel, orange marmalade, and butter for the other bread.

When I checked on the breads halfway through their cooking it didn't look like they were rising at all and I was very concerned.  However, at the end of the time both loaves were big, fluffy, and golden brown.  The inside swirl patterns were gorgeous.  I served the jalapeno cheddar loaf with dinner.  The pillowy soft bread had a burst of butter, cheddar, and jalapenos throughout it.  It looked amazing and was quite possibly the best jalapeno cheddar bread I've ever made.  The cranberry orange bread was just as good.  It was sweet and tangy and stuffed with fruity flavors.  I took it to work and everyone was amazed by the swirls in the bread and wanted to know how I was able to achieve that look. 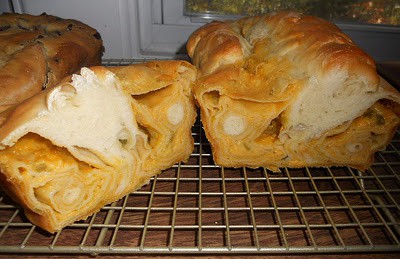 Povitica is much easier to make then I had thought and the filling combinations are endless.  Because the original recipe makes 4 loaves and it only has to rise once, I know this will become a holiday favorite.  I can't wait to try out the traditional nut filling and a pumpkin cream cheese filling for Thanksgiving. 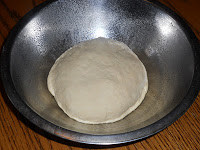 1.  To activate the yeast combine the sugar, flour, yeast, and warm water in a small bowl.  Allow to stand for 5 minutes.

2.  In a medium saucepan heat the milk until it is just below boiling, stirring constantly.  Remove from heat and allow to cool slightly (to 110 degrees).

3.  In a large bowl mix the scalded milk, sugar, and salt.  Stir until well combined.  Add in the beaten egg, yeast mixture, melted butter, and half of the flour.

4.  Slowly add in the remaining flour, mixing well until the dough starts to clean the bowl.  Turn the dough onto a floured surface and knead for 5-10, adding a tablespoon of flour at a time until the dough is smooth and does not stick.

5.  Shape the dough into a ball and place in a lightly oiled bowl.  Cover the bowl lightly with plastic wrap and then with a clean kitchen towel.  Let it rise for 2 hours in a warm place, or until it is doubled in size.

6.  To make the jalapeno cheddar filling heat the milk and butter in a small saucepan until it is boiling.  Remove from heat and stir in the cheddar cheese and jalapenos until well combined.  Mix in the egg white, garlic, and pepper.  Let stand at room temperature until you are ready to use. 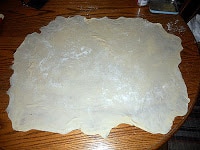 7.  To make the cranberry orange filling heat the butter, orange marmalade, and orange zest in a small saucepan until it is just boiling.  Pour over top of the dried cranberries and stir.  Add in the sugar, vanilla, and egg yolk and mix well.  Let stand at room temperature until you are ready to use. 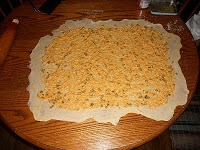 9.  Using the tops of your hands and the rolling pin, stretch the dough out from the center until the dough in think and uniformly opaque.  Continuously pick up the dough as you are working to make sure it is not sticking to the table.

10.  The dough is thin enough when you can see the color and pattern of the sheet or table underneath the dough. 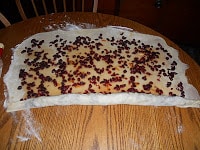 12.  Lift the edge of the dough and begin gently rolling like a jellyroll.  Roll until it forms a rope.
13.  Spray a bread loaf pan with cooking spray.  Gently lift and place the dough in the pan forming a U shape with the ends meeting in the middle.  Coil the ends around the dough in the pan.  This will give the bread it's characteristic shape. 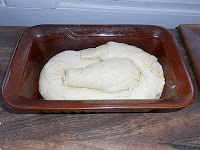 15.  Preheat the oven to 350 degrees.  Loosely cover the bread in the bread pans with plastic wrap until the oven is heated.

16.  Remove the plastic wrap from the bread and cook for 15 minutes.  Turn the oven heat down to 300 degrees and continue cooking for an additional 45 minutes or until the tops of the loaves are golden brown. 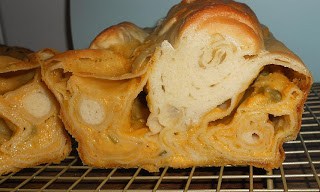 17.  Remove the bread from the oven and allow to cool for at least 30 minutes on a wire rack.  Remove from the pans.

18.  The best way to cut this bread is to turn the loaf upside down.  Slice with a serrated knife.  Place the uncut portion of the loaves in a zip top bag for up to 5 days.  The loaves can be kept in the refrigerator for up to 10 days. 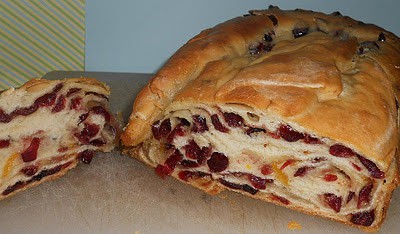