37 shares
Jump to Recipe
This month the What's Baking challenge was hosted by Ange of The Tiny Tyrant's Kitchen .  She challenged us to make something that used fall ingredients.  Of course I immediately thought of apples and pumpkin but I've made so many desserts out of the two I wasn't sure I wanted to make something else.  However, when I saw this recipe for a savory pumpkin recipe I was sold. 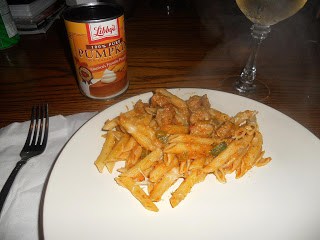 This pasta dish is easy to through together and just about any vegetable can be added to it.  When I was cooking it I tasted it after adding the pumpkin and wasn't too happy about the overwhelming taste of pumpkin.  However, after adding in the milk, the flavor mellowed out and was wonderful.  The entire dish tasted of fall from the sausage and peppers to the pumpkin cream sauce.

I served this to my husband without telling him it was pumpkin because he thinks he doesn't like pumpkin.  He ate his entire plate and asked for more.  When I asked him if he knew what was in the sauce he answered that he knew it was a cheese sauce.  When I told him it was pumpkin he was speechless!  After getting over his initial shock, he then ate another spoonful.  I'll definitely be rotating this dish in on pasta night.
Continue to Content

Preheat the oven to 350 degrees.  Spray an 11 x 7 pan with cooking spray and set aside.

Cook the pasta according to the package directions and keep warm.

Cook the sausage in a large skillet until brown.  Remove from the skillet and drain over paper towels.

Using a small amount of the sausage fat, saute the onion, green pepper, garlic, and red pepper for 5 minutes.  Stir in the pumpkin and oregano.  Add in the salt.   Bring to a boil and simmer for 5 minutes.

Stir in the milk and sausage and simmer until the sauce thickens.  Remove from heat and add past and parsley.  Pour into the baking pan.

Top with mozzarella cheese and Parmesan cheese.  Bake for 20 minutes or until the cheese is bubbly and golden brown.

Recipe adapted from I Was Born to Cook 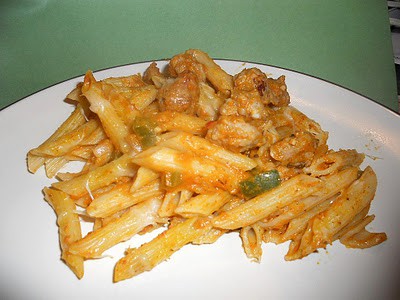