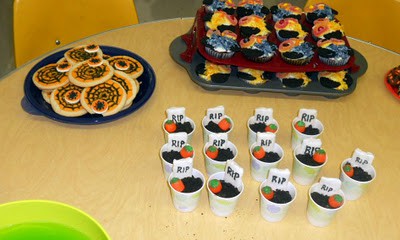 Every month I have a reward party for students that show good behavior for the entire month.  For October we hosted a Little Monsters Halloween party for the lucky students.  I had so much fun making the treats for the party and the kids loved them.  They couldn't believe everything we had made for them! 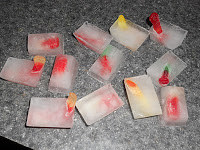 The Little Monsters Party ended with each student taking home a bag of "Monster Mash Mix" that they made themselves and making a pumpkin patch photo frame for their parents.  This has been my favorite day at work so far this year!  The Witches Brew was simply green Hawaiian Punch mixed with Sierra Mist.  I then made ice cubes with gummy worms in it to put in the brew.  The kids thought it was awesome when the ice melted and the worm was left in their cups.
The Graveyard puddings were made with chocolate pudding put into Dixie Cups.  I then crushed up Oreos to sprinkle on the top.  The tombstones were made from white chocolate dipped graham crackers and the pudding was finished off with a candy corn pumpkin. 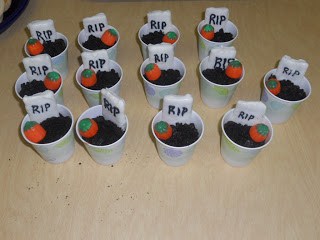 I can't say what went into making the Owl Cupcakes because my partner in crime, Kristin, had the pleasure of making those.  I do know that the eyes were made from peach rings and M & M candies, the wings were made of Oreo cookies, and the feathers were flakes of colored coconut. 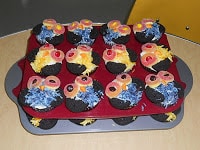 1.  Line a 9 inch square pan with 2 sheets of parchment paper, leaving some hanging over the edges.

2.  Using a mixer, beat the cream cheese and powdered sugar in the bowl until smooth.  Stir in the vanilla.

3.  Meanwhile, melt the almond bark in the microwave, checking every 30 seconds to see if it is melted.  Add the melted chocolate to the cream cheese mixture and beat until smooth.  Fold in the pretzel pieces. 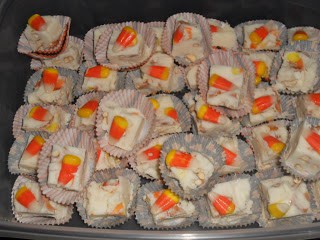 4.  Pour the mixture into the prepared pan and top with the candy corn.  Refrigerate at least 2 hours or up to 2 days.

5.  Remove from refrigerator and transfer the fudge to a cutting board using the parchment paper to pick it up.  Cut the fudge into 1 inch pieces and place in mini cupcake liners.

1.  Melt 1 oz. of the milk chocolate in the microwave.  Dip each Pringles Stix into the chocolate then stick the dipped end into the marshmallow. 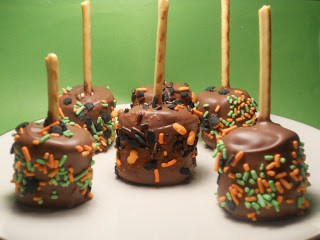 2.  Lay a sheet of waxed paper on the kitchen table.  Put the sprinkles in a shallow dish.

3.  Melt the chocolate in the microwave, checking every 30 seconds to see if it is melted.  Remove from the microwave and stir well.

4.  Dip each marshmallow into the chocolate letting the excess drip off.  Roll the marshmallow in the sprinkles and set on waxed paper to dry.

5.  Remove the marshmallow pops from the waxed paper and place on a serving dish.

I got the idea for the spiderweb cookies from Martha Stewart's fireworks cookies.  I simply made sugar cookies then outlined and flooded them with colored royal icing.  I then put black royal icing in a squeeze bottle and put a dot in the middle and three circles around the dot.  Using the end of a toothpick I dragged the icing from the center to the outside of the cookie.  For some of the cookies I did half of the toothpick dragging to the outside and the other half to the inside.  The spiders are sugar spiders that I picked up at a store. 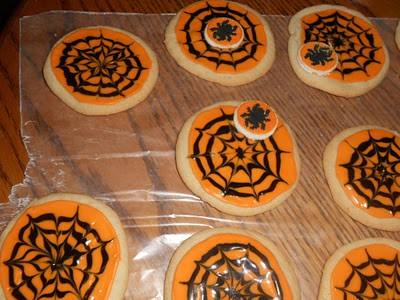 Finally, the Monster Mash Mix was an easy and fun activity for the kids to help with.  The day before I popped kettle corn and drizzled it with orange and black chocolate.  The kids got to put the popcorn in a Halloween bag and then add in a variety of items including M and M's, peanuts, pumpkin seeds, candy corn, candy corn pumpkins, red hots, and Skittles.  We put a twist tie on the bags and had the kids take the Monster Mash Mix home to share with their parents. 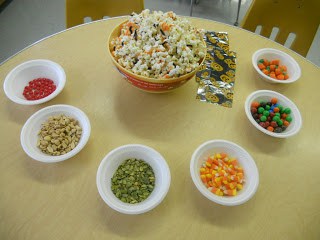 The kids had a great time and did Kristin and I.  It was so nice to be able to enjoy time talking and having fun with our students without having to worry about getting work done.  We've already begun planning for our Thanksgiving party but if you have any ideas, leave me a comment letting me know! 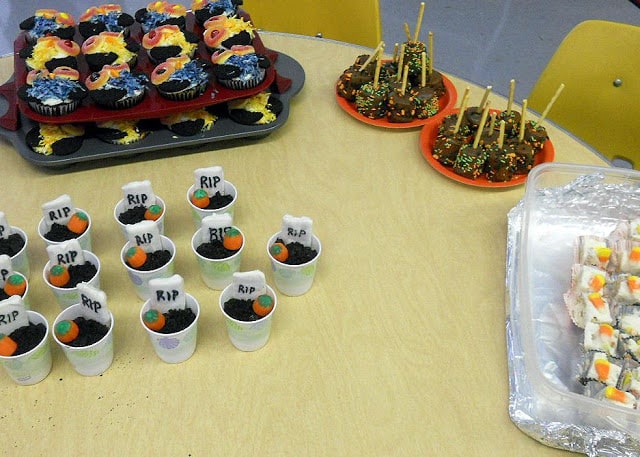