Alright, I know I said yesterday was the last day of #pumpkinweek but I just have to share this recipe too!  When I went to the liquor store last week I just ran in to grab some vodka to make another batch of homemade vanilla extract.  Nothings better then homemade.  It tastes so much better then the diluted store bought stuff. 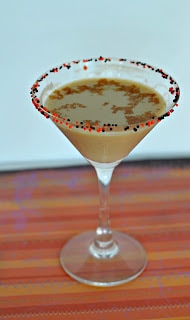 Anyhow as I was scanning the shelves for vodka my eyes landed on a limited edition Pumpkin Spice vodka.  I immediately grabbed for it knowing I had to have it.  It's October, it's fall, and I'm bound to need pumpkin spice vodka for something, right?  As soon as I got home I started browsing recipes and boy did I find a lot of them!  I went with an easy Pumpkin Spice martini since I had all the other ingredients in my house.

There's two things you need to know about this martini.  One:  This drink is seriously strong.  It has 3 shots of liquor in it per serving so watch yourself when you are drinking these!  Two:  It's like drinking liquid spiced pumpkin!  It's so yummy and is as close to drinking fall as you can get.  If you like martinis and you like pumpkin you need to get out and try this now!

2.  Take the lemon wedge and run it around the rim of a martini glass.  Pour the sprinkles into a shallow dish and place the rim into the sprinkles, coating it.

3.  Shake the liquor mixture and strain into the martini glass.  Sprinkle with additional pumpkin pie spice if desired and serve immediately. 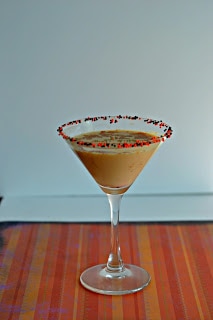