Here is your complete guide to homemade vegan pie! First, you’ll master your crust, be it flaky, nutty, cookie-based, vegetable-based, or gluten-free. You’ll learn to make and roll the dough. Then, you’ll craft your filling, finish your pie, decorate it, and make a homemade topping. (Vegan whipped cream, anyone?) Whether you’re looking for a filling meal—such as Mushroom-Polenta Pie or Cornish Pasties—or a dessert pie beyond compare—such as Pumpkin Pie or Butterscotch Pudding Pie—Pies and Tarts With Heart has a lovingly crafted pie for you. And with gluten-free and raw options, you’ll be sure to find the perfect pie for your family’s needs.  (-synopsis) 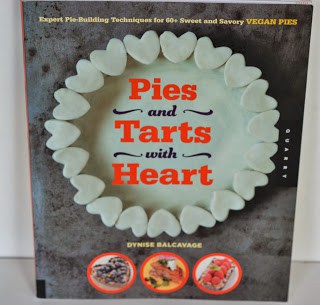 I really enjoyed this cookbook.  I've been getting more and more requests for vegan desserts and pies have been one of the hardest things for me to make vegan.  This book starts out by talking about ingredients and tools used in pie making.  Then it moves on to basic crust recipes.  All of the recipes are vegan and most have notations on how to make them gluten free which is an extra bonus in my book.  Next it moves on to traditional pies such as Apple Pie, Gingered-Pear Pie, and Pumpkin Pie.

Not looking for traditional?  No problem. They move on to Creamy Pies such as Frozen Chocolate Mudslide Pie and Butterscotch Pudding Pie.    There's also citrus pies, nutty pies, and even pies in the raw.  I cannot wait to try the Raw Baklava Crusted Apple Pie-YUM!  Then there is an entire section on artistic tarts.  These tarts are almost too pretty to eat.  The book ends with savory pies and tarts.

Looking through the book I just couldn't decide what to make.  I had 4 different pies marked but when I looked on my kitchen counter and saw the fruit bowl overflowing with apples my mind was made up for me.  Apple pie it was!  At first I was just going to use a pre-made pie crust and go with the apple filling recipe but I realized that would defeat the purpose since the pie crust wouldn't be homemade. 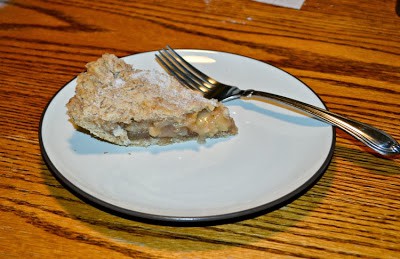 Instead I made the double crust recipe and I'm so glad I did!  While it was harder to roll out than regular pie crust, it tasted even better once it was baked.  The crust was perfectly brown and stayed crisp, even the next day.  Then I made the apple pie filling and was concerned that it was going to be too runny because of the soy milk but when I cut into the pie I didn't have any filling run out.  The next day the filling had firmed up even more and my pie slices were picture perfect. 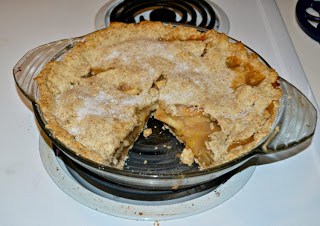 My husband had no idea this pie was vegan and he enjoyed it every bit as much as I did.  In fact, we enjoyed it so much we didn't share it with anyone!  That's right, the two of us finished off the entire pie ourselves...oops!

2.  Dice the margarine and shortening and add to the flour, tossing very well so each piece is covered with flour.

3.  Using a pastry blender, blend the flour and fats, with the aim of handling the dough as little as possible.  When the bits are about pea size, start adding water, 1 tablespoon at a time, sprinkling evenly onto the dough.

4.  Wrap tightly in plastic wrap.  Refrigerate for at least 2 hours or overnight.

5.  Preheat the oven to 425 degrees.Divide the dough in half and roll out the top and bottom crusts.  Place the bottom crust in the pan and lay the top gently over it to store temporarily.  Refrigerate until ready to fill.

6.  Just before baking the pie, in a large bowl, stir together the apples, flour, sugar, brown sugar, spices, salt, vanilla, and soymilk.    Spoon into the prepared crust.  Top with the second crust and crimp the edges as desired.  Sprinkle with the coarse sugar.

7.  Place the pie on a foil-lined cookie sheet (to catch any fruit spillover) and bake for 15 minutes.  Lower the heat to 350 degrees and bake for 45 more minutes, until the top is golden.  If the crust seems to brown too quickly, cover the pie with aluminum foil.  Allow to cool completely before slicing. 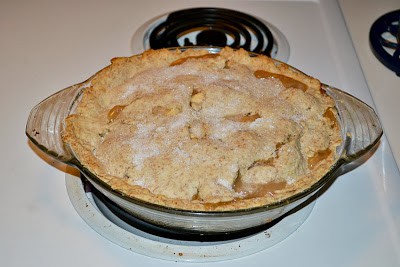