Throughout the years I've seen a lot of rainbow Jell-O and I've even eat some rainbow Jell-O.  I never really thought about what the white stripes in between the colored Jell-O was until I decided to make it.  When I saw that it was simply sweetened condensed milk and gelatin I was really surprised.  I guess I shouldn't have been since sweetened condensed milk is used in so many recipes. 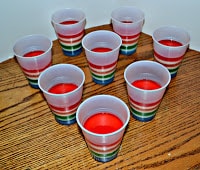 If you want to make this recipe you need to be aware of two things.  It's a very easy process but it's quite time consuming.  You need 15-20 minutes in between each layer and since I had 4 flavors of Jell-O I had seven layers total counting the white layers.  It ended up taking me over 2 hours to complete the entire process.  I will say they are super cute and my students absolutely loved them when I took them to school for a snack.  I used sugar free Jell-O to keep the calories down.

I ended up using red, orange, green, and blue but you can use as many colors as you'd like.  I took these in as for St. Patrick's day because of the rainbow connection but I think they'd be great for birthday parties or summer BBQ's as well.

1.  In a small bowl combine the Berry Blue Jell-o and one envelope of Knox gelatin.  Stir in 1 cup of boiling water and stir until dissolved.  Divide evenly into the 12 cups.  Refrigerate for 15 minutes or until set but not firm.

2.  In a small bowl combine the sweetened condensed milk and 1 cup of boiling water.  In a second small bowl place the cold water.  Sprinkle 2 packages of Knox gelatin over the cold water and let stand for 1 minute.  Then stir in ¾ cup of boiling water.   Add this to the milk mixture.  Pour 1 cup of the milk and gelatin mixture into a liquid measuring cup ad pour evenly over top of the Berry Blue Jell-O cups.  Refrigerate for 15 minutes or until set.

3.  Repeat sets 1 and 2 again using the lime Jell-O and the peach Jell-O.  Make the final layer with the strawberry Jell-O and refrigerate for at least 2 hours before serving. 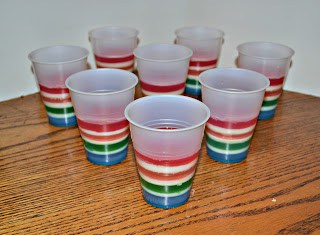