After buying 19 pounds of tomatoes at the farmer's market I had to think of some creative ways to can them.  I wanted to make tomato sauce but it takes a lot of time and effort in order to can the sauce.  The tomatoes have to be peeled, the sauce has to be boiled down, and then the jars have to be processed for a lengthy period of time. 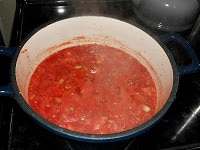 With that said, opening a jar of fresh tomato sauce in the winter is well worth the effort.  The sauce tastes just as fresh as it did the day it was canned.  This amounts in this recipe need to be followed as written in order to produce a safe product due to the addition of the onions which are a low acid food.

This recipe tastes over 3 hours from start to finish so allow proper time to complete it.  I like to remove the skin and seeds of the tomatoes before placing them in the saucepan for the first time but if you would rather make the sauce and then put it through a food mill that would work as well.

The seasoned tomato sauce is really delicious.  It's full of fresh tomato flavor as well as strong flavors from the garlic, onions, and herbs.  It goes well on top of fresh pasta or store bought ravioli.

1.  Cut the peeled and seeded tomatoes into quarters.  Place a few of them in a large saucepan over medium high heat.  Bring to a boil then use a potato mashed to crush the tomatoes and release the juices.  Stir frequently to prevent burning.

2.  Continue adding tomatoes and crushing them until they are all in the saucepan.  Once all the tomatoes have been added, stir in the onions, garlic, oregano, bay leaves, salt, pepper, sugar, and pepper flakes.  Bring to a boil then reduce heat to medium.

3.  The sauce should continue at a gentle boil for at least an hour, stirring occasionally, or until the sauce has thickened and reduced by half.

5.  If desired, press the tomato sauce through a fine sieve or food mill and then return to the pot.  (I skipped this step because I enjoy chunky tomato sauce).

6.  Before filling the pint jars add 1 tablespoon of lemon juice to each jar.  Ladle the hot sauce into the jars leaving ½ inch of headspace.  Remove the air bubbles and adjust headspace.  Wipe the rims and place the lid on the jars.  Place the screwband on top and screw to fingertip tight.

7.  Place the jars in the boiling water canner making sure they are completely covered by water.  Process for 35 minutes.

8.  After 35 minutes remove from heat and remove the lid.  Allow to rest in the water for 5 minutes then remove the jars.  Allow the jars to cool for 24 hours then check the seals and store for up to 1 year. 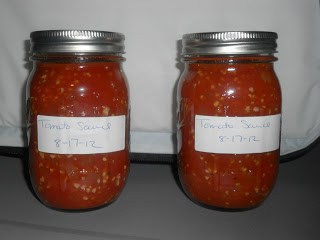