The school year ending with Reject High's destruction was enough for Jason Champion. Summer break meant lots of time to split between his girlfriend Sasha and best friend Rhapsody.

That is until predictions of a solar storm arrive, one unlike the earth has ever seen. Sasha tells Jason the sun's rays may affect his invulnerability and strength, while a mysterious new enemy is possessed with the belief that whoever absorbs the radiation will become immortal.

With no other options and their enemies drawing closer to their goal, Jason and his friends join forces with the “Collective,” a group that has guarded the origin of their power for a century. Its members think the storm will cause an explosion killing millions – a price none of them are willing to pay.

The second installment in a young adult fantasy series, Sophomore Freak combines engaging characters inside of a page-turning, breathtaking adventure. Equal parts sci-fi, fantasy, and action-adventure, Sophomore Freak is a breathtaking page-turner written from the perspective of Jason Champion, a 16-year old teenager with rage blackouts and a penchant for getting in trouble,

Equal parts sci-fi, fantasy, and action-adventure, Reject High is a breathtaking page-turner written from the perspective of Jason Champion, a 15-year old teenager with rage blackouts and a penchant for getting in trouble, (-synopsis) 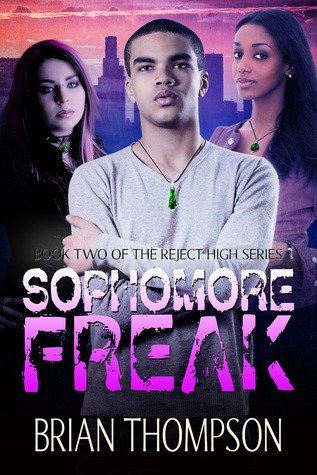 This is the second book in the Reject High Series.   In this addition Jason is still getting used to his powers.   Things are going well until his dad picks him up to go out to dinner.  While out eating, someone tries to force Jason to give up his crystals.  When Jason refuses, the man sends flying knives towards Jason's stepmom, injuring her in the process.  The only way to save her is to "jump" her to the hospital.

After jumping her, Jason has to tell his father the truth.  Unfortunately that is the least of his worries as soon Sasha and Rhapsody are vying for his attention and he isn't sure which girl he wants to be with.   If that wasn't enough, a group of people known as the "Collective" come to get the three friends to join forces with them.  They need help to protect the power but also to stop the solar storm from killing millions.   The teenagers aren't sure how they can help but soon they are caught up in something even bigger then what they faced at Reject High.

Now they just have to stop the solar storms from killing everyone and Jason needs to pick a girl....and make it the right one.   Will he be able to save the world?   Will he choose the right girl?  How much can one teenager take?

I really enjoyed the second book in this series.   Since I read the first one I was already familiar with the characters and their super powers.  That made this book easy to get in to and I liked it even better then the first book!