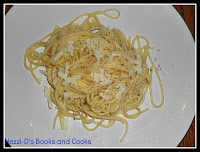 Friday night at our house is usually Italian night.  After a long week I don't like to spend too much time on dinner on Fridays so we either have pizza or some type of easy pasta dish.  We had a lot of tomato sauce this week so I didn't want anything with a tomato or marinara base.  I found a simple recipe in Cook's Illustrated that I wanted to try.

The recipe is simply spaghetti with Pecorino Romano, fresh cracked black pepper, and a little cream.  it's very simple and the sauce is fairly thin but it's a great dish.  The flavor of the cheese and pepper shines through and lightly coats the pasta.  The pasta and sauce took less then 20 minutes which makes for a quick and easy weeknight meal.

1 ½ t. fresh ground black pepper
1.  In a large pot over high heat bring 2 quarts of water and the salt to a boil.  Cook the spaghetti according to the package directions.
2.  Drain the pasta into a colander with a bowl underneath to reserve the pasta water.  Pour 1 ½ cups of the pasta water into a measuring cup and discard the rest. 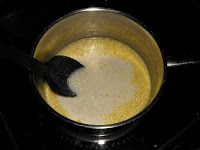 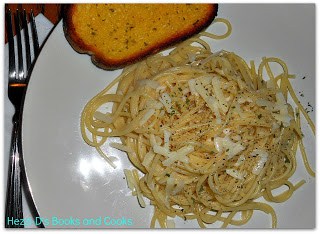