Happy 4th of July!  I hope everyone is beating the heat and heading to the local pool or staying in the shade while having a cookout.  As part of the Holiday Recipe Club I made a delicious, chilled dessert for the 4th.  This time around the featured ingredients were blueberries, barbeque sauce, or whipped cream.  I had a difficult time choosing but finally went with the whipped cream.

As usual I had 3 overripe bananas sitting in the fruit bowl and I wanted to make something using them and the whipped cream.  Most times I'll turn the bananas into banana bread or muffins and take them into work the following day.  I've already done this several times this month plus I made brownies this weekend so I wasn't feeling up to baking.  It was too hot outside.  I asked some of my favorite bakers what I should make and as usual they had a ton of ideas. 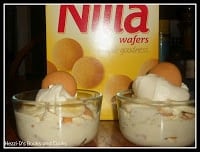 Some of the ideas I got were Bananas Foster, Bananas Foster Nachos with Chocolate, Banana Cream Pie, and Banana Chocolate Chip cake.  While these all sounded amazing and I pinned every one of them, the one that caught my eye was a simple recipe for Banana Pudding with Nilla Wafers.  The recipe calls for making a simple vanilla spiced pudding then layering it with bananas, whipped cream, and Nilla wafers.

This pudding was seriously so easy to make and it tastes amazing!  So much better then the instant pudding.  Layered with the bananas, Nilla wafers, and whipped cream it made a decadent dessert that we could eat one serving at a time and were perfect to share at a barbeque!  The bananas added big flavor to the creamy vanilla spiced pudding.  The Nilla wafers added a much needed crunch and I topped it off with fluffy vanilla whipped cream.  Put into parfait glasses this recipe would be a show stopper. 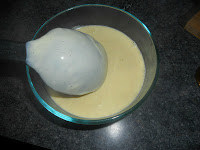 1.  In a medium saucepan over medium heat whisk together the sugar, cornstarch, nutmeg, cinnamon, and salt.  Slowly whisk in the half and half and egg yolks.

2.  Continue cooking,whisking constantly, until the pudding thickens and begins to boil, 8-10 minutes.  Remove from heat and add in the butter and vanilla.  Whisk until butter has melted.

3.  Pour the pudding into a bowl and refrigerate until cold, about 3 hours.

4.  In a serving dish or glass layer the bananas, the pudding, and then the Nilla wafers.  Repeat one more time with the layers.  Top with whipped cream, a banana slice, and one Nilla wafer. 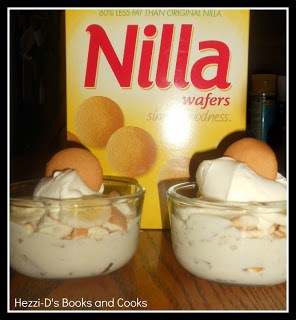