Sometimes you build a themed cake simply around the theme and other times your build it around a single item you have to decorate the cake.  In the case of my Spooky Graveyard Layer Cake I designed the cake around this awesome Wilton Build it Yourself Gingerbread Coffin Kit. 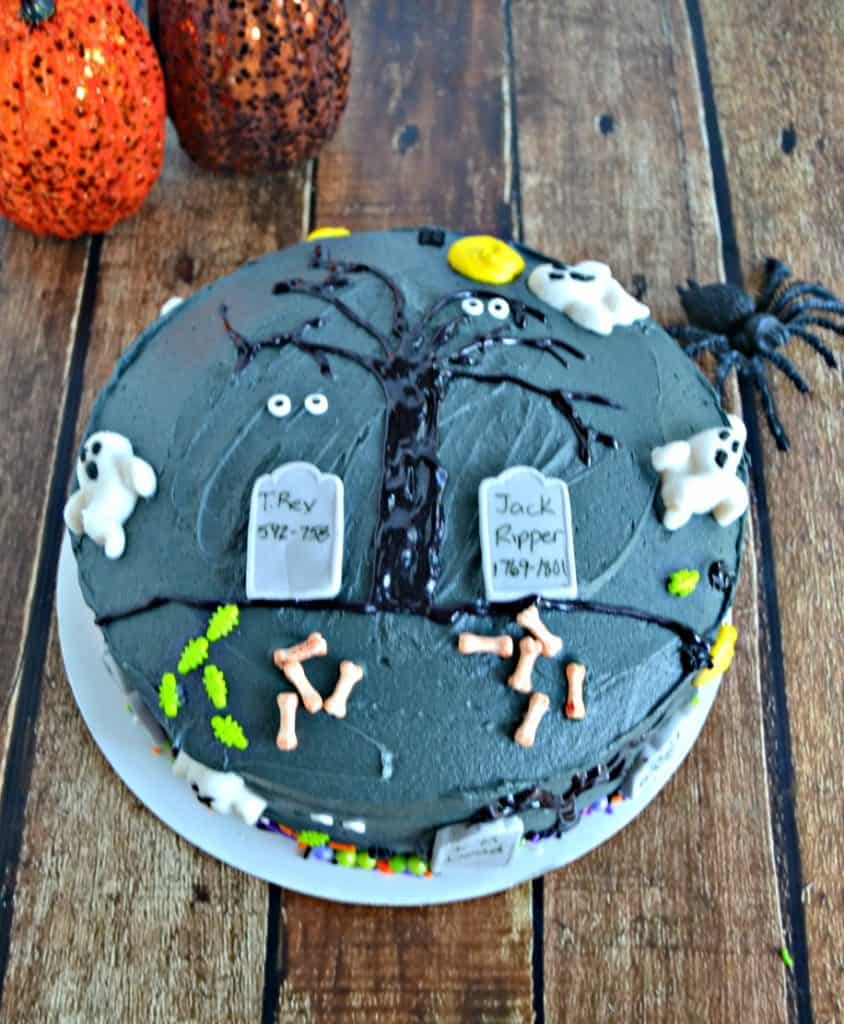 One day when J went down for his nap I got the kit out and started playing with it.  It was easy to put the actual coffin together and I just used a few random items like bowls and mugs to hold the sides of the coffin while the icing dried to hold it together.  It probably only took about 20 minutes to build the coffin.  Decorating it took a about 15 minutes and was easy since the kit came with candy bones, bugs, and coloring decorating icing.  I actually think my coffin turned out better then expected.   Inside the coffin I put black sprinkle "dirt" with eye balls, bones, and bugs peeking out of the dirt. 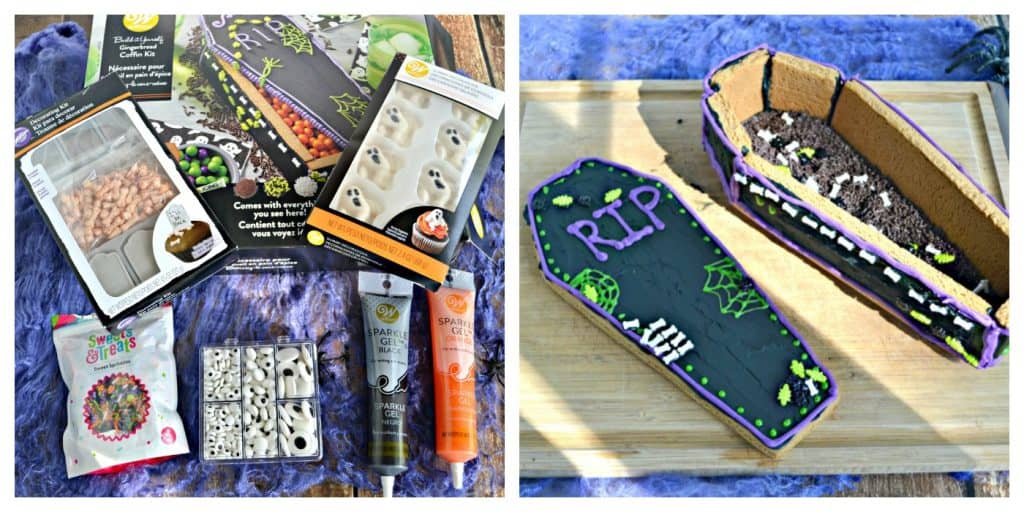 Now that I had my coffin I knew I needed to build a cake that was spooky enough to have the coffin on top.  I started by making the cake.  I went with a basic yellow cake and divided it into two batters.   One I dyed red and flavored with Adams Cherry Extract.  The other batter I flavored with Adams Extract Vanilla Flavoring and dyed black.  I thought a black and red layer cake would be creepy and perfect for a Halloween graveyard. 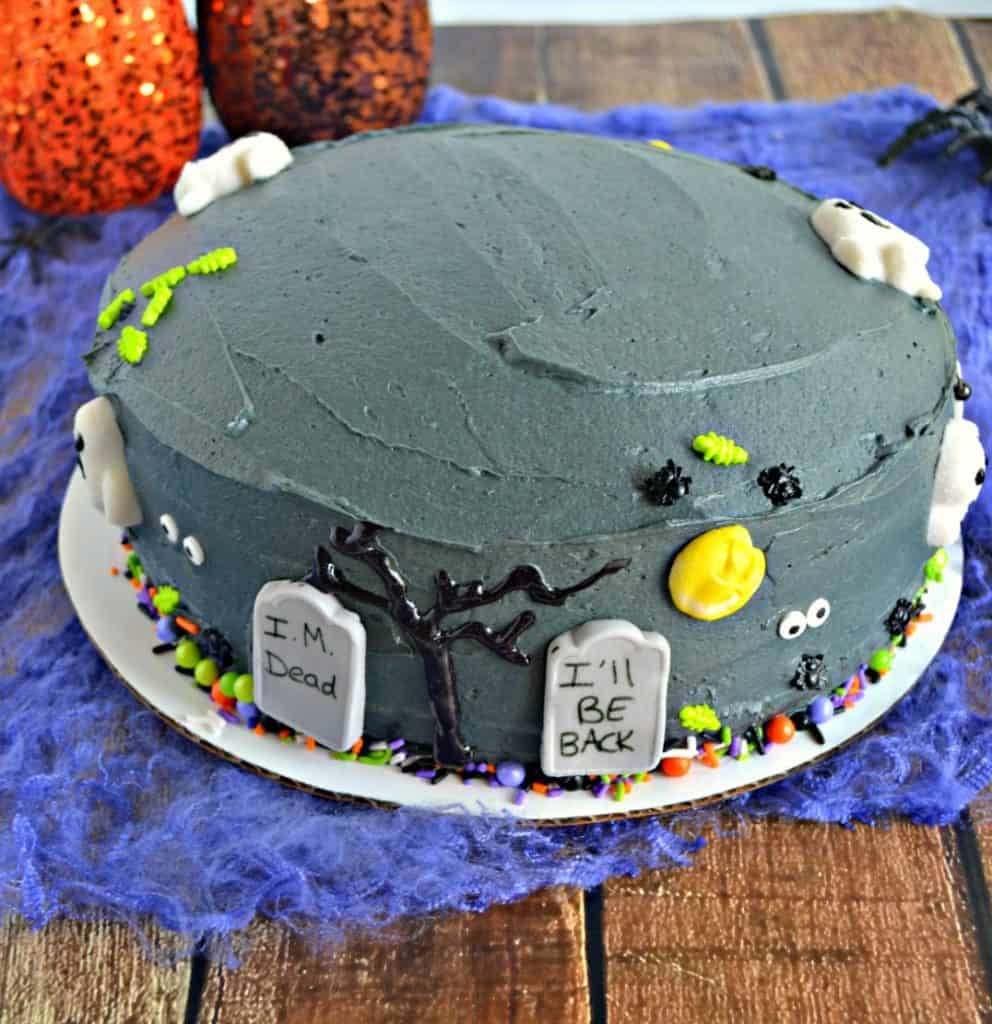 Once the cake was in the oven I got started on my buttercream.  I used Dixie Crystals powdered sugar and Adams Extract Vanilla Flavoring to make a fluffy vanilla buttercream.  I then dyed it gray so it would be a great canvas for my graveyard.  I quickly put my cake together and covered it with the gray frosting.  I was actually starting to get pretty excited because it looked really neat.  Everything i needed to decorate it was laying on the table in front of me but I actually had to get started. 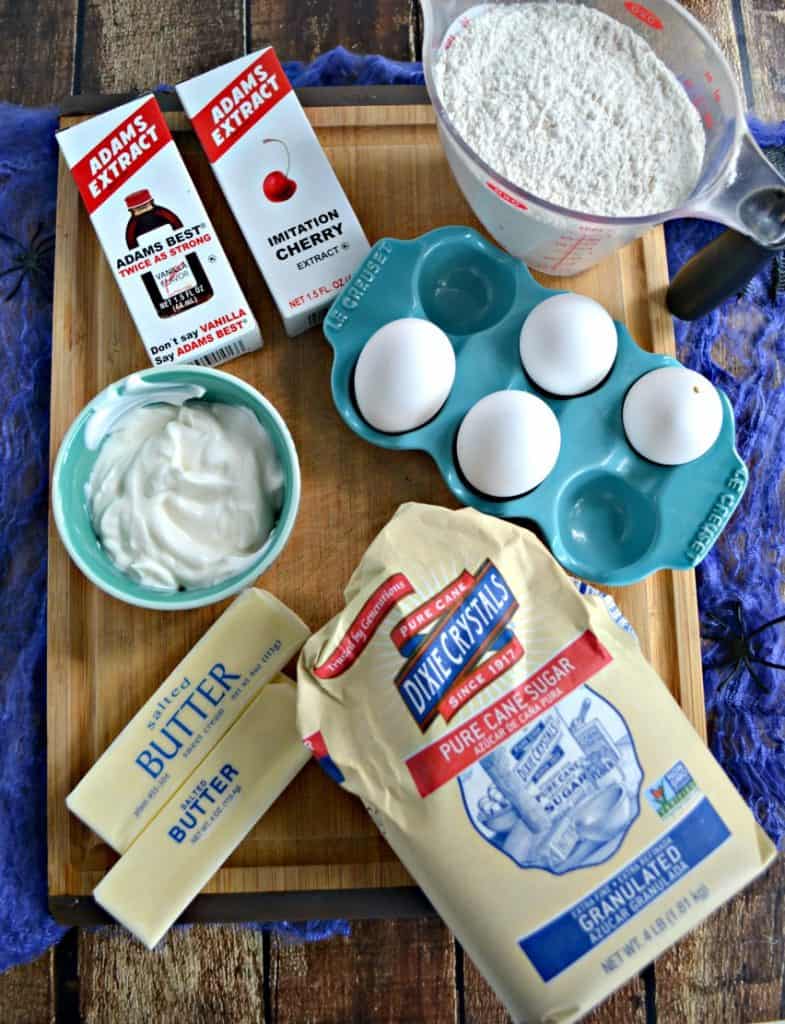 I figured the easiest thing to do would be to put a border of sprinkles around the bottom of the cake instead of piping a border.  I used Sweets & Treats Monster Mash Sprinkles to give the cake a fun pop of color.  After that you can pretty much decorate it any way you want.  I started by taking a Wilton Graveyard Cupcake decorating kit and removed the tombstones.  I wrote on them with edible marker and put them around the cake.   Then I used Wilton black sparkle gel to make some spooky looking trees in between the tombstones.  I put a few eyeballs around the cake to make it look like someone was watching me. 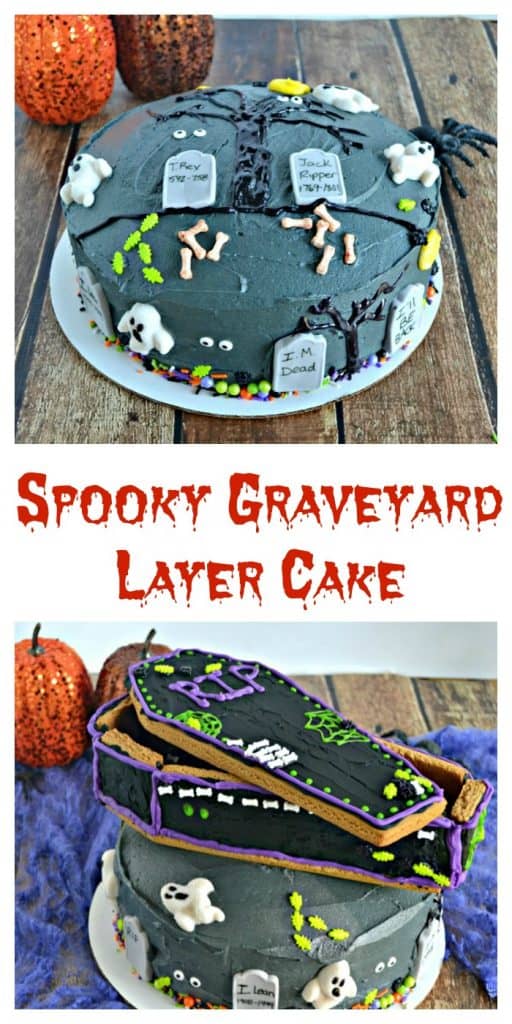 By this point I was really getting into decorating the cake and kept adding more and more.  I piped on a yellow buttercream moon and then decided to put a few of the candy bugs from the coffin kit on the sides as well.  I finished off the sides with candy ghosts.  Then I was ready for the top.   All I did with the top was set the bottom of the coffin on it and then put the top on at an angle so you could see inside the coffin.  It looked like a spooky graveyard and I was so excited! 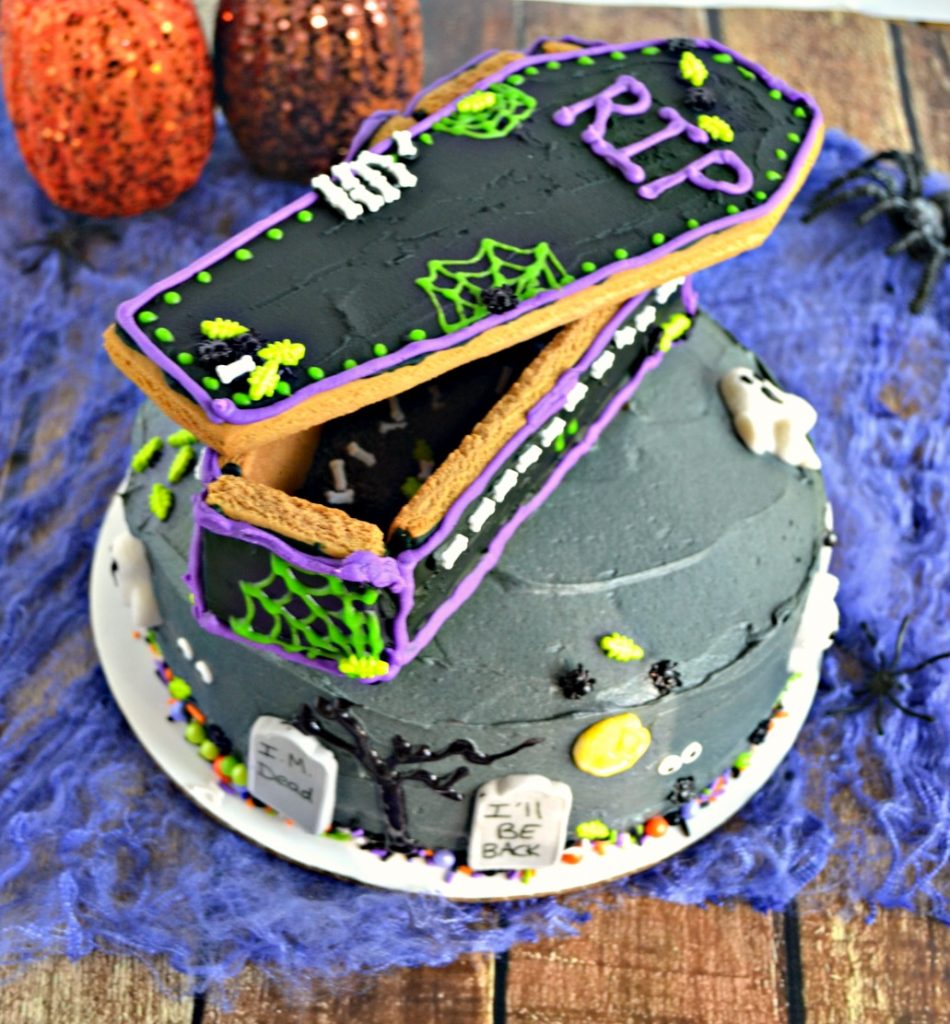 If I was going to serve this cake at home I would have left it as it was.  However, I was taking it to work with me and I couldn't fit the coffin and the cake in my cake carrier so I ended up taking the coffin off and decorating the top of my cake.  For the top I simply made a big, creepy black tree, a yellow moon, two tombstones, and a few ghosts.  Below the tombstones i put a few bones from the graveyard cupcake kit.  It looked so good and I was pretty impressed that it only took me 2 hours to make and bake the cake, cool it, and decorate it to look like a graveyard.

I took the cake into work along with the coffin.   Everyone thought it was super fun and really enjoyed the taste of it as well.  A cherry vanilla cake with vanilla buttercream is always a hit, especially around Halloween!   So grab yourself a few edible Halloween decorations and make this cake for yourself! 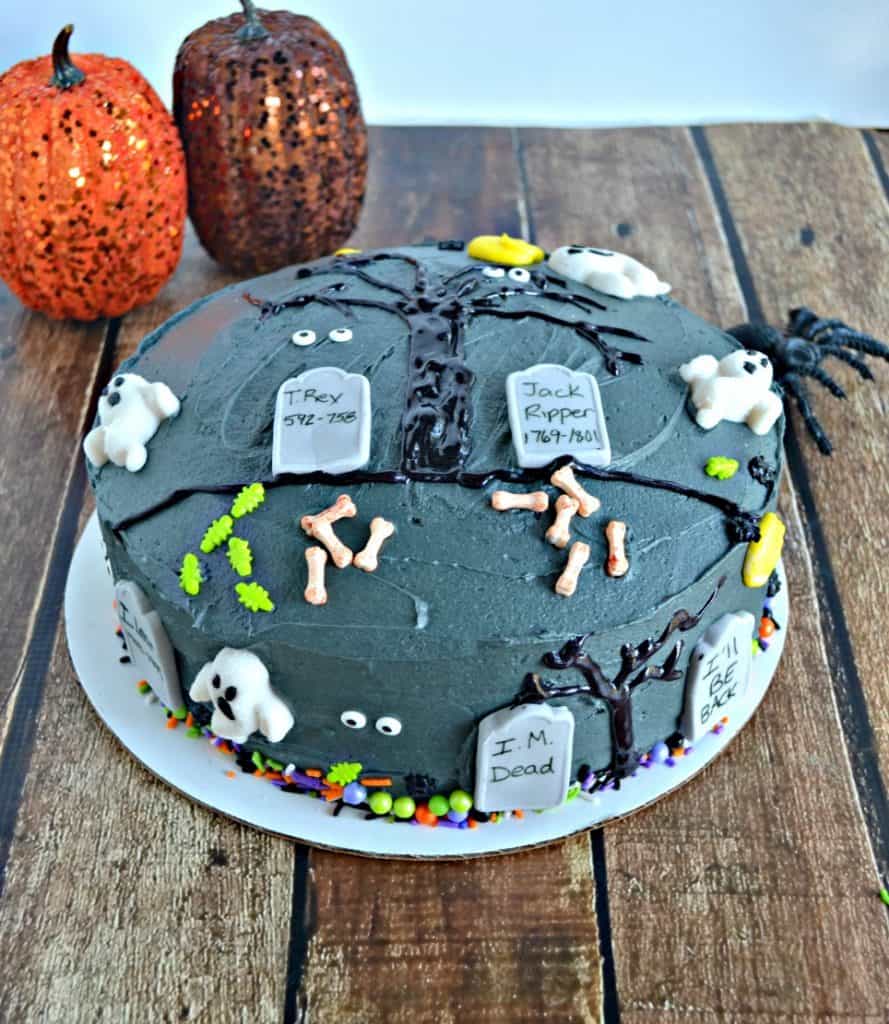