I am all baked out.  Yes, you heard correctly, after a long weekend of baking I don't think I can bake anymore.  This past weekend I made 3 dozen large muffins, 2 dozen pumpkin blondies, 2 dozen decorated vegan sugar cookies, and 4 dozen regular decorated sugar cookies.  I really enjoyed making everything but all the baking and decorating is surprisingly exhausting.  In fact did you know that the average person burns between 100-130 calories an hour when actively cooking?  I must have burned a good 600 calories this weekend while I was baking! 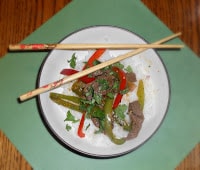 After a full weekend of baking I wasn't really in the mood for cooking dinner either.  I wanted something that I could make in under 30 minutes that was good and semi-healthy.  I found a recipe for stir fried Thai beef that I had printed out over a month ago and forgot about.  I promptly whisked together the marinade ingredients, tossed in the beef, and got working on chopping up the remaining ingredients.

The flavors in this beef dish were phenomenal!  It was slightly sweet, a little bit salty, with just a bit of heat.  The peppers added color to the dish and I put it all over top of fluffy jasmine rice.  This was a flavorful and easy to make meal.

3.  In another small bowl combine the garlic and 1 teaspoon of oil.  Set aside.

4.  Heat the remaining oil in a skillet over medium high heat.  Add in half the beef, cooking without stirring for 2-3 minutes per side or until browned.  Remove from skillet and brown the other half of the meat. 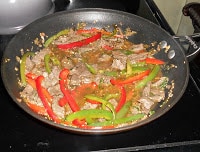 5.  Add the chilies, shallots, red peppers, and green peppers to the same skillet the beef was cooked in.  Cook for 3-4 minutes or until the vegetables just begin to soften.  Push the pepper mixture to the sides of the skillet.

7.  Return the beef and any juices to the skillet.  Toss well to combine.  Stir in half of the cilantro.

8.  Serve over top of rice.  Sprinkle with remaining cilantro. 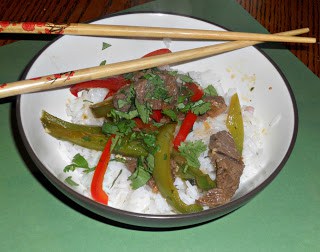