Now the star of her own reality show, The Family Frugalicious, Maddie Michaels heads south of the border with her family to cover bargain destination weddings at a swank, but budget friendly, Mexican resort. Things get a little too real when timeshare sales manager Alejandro Espinoza makes a play for Maddie one evening and ends up floating dead in the pool the next. Was it an accident or a preplanned part of the Mrs. Frugalicious storyline?

When the show's producers extend the trip so she, her all-but-ex Frank, and the kids can investigate—not to mention get enough footage for a two-part, Emmy-worthy episode—Maddie fears she's in way more agua caliente than she ever bargained for. (-synopsis) 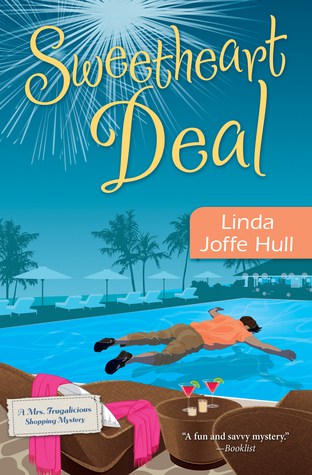 Maddie Michaels is the queen of frugal shopping and she has her own TV show to prove it.   On the outside she has the perfect family.  She has her loving husband, teenage twin boys, and 20-something stepdaughter.  The only problem is that she and her husband are only still married because of the show.

The Michaels family heads to Mexico for a fabulous budget wedding of the producer of their show, The Family Frugalicious.  Things start off well with sunshine, fun, and plenty of scenes being shot.   There's even a timeshare deal that the Michaels family is getting for free!

Everything seems to be going well until Maddie receives a note from one of the time share managers.  He wants to meet her for drinks after the wedding.  Maddie sends back her own note saying she can't but Alejandro won't quit.  He sends a reply to each note telling her he'll wait for her.  Maddie finally gives in and after the wedding she goes walking to find him when a scream rings out.   Alejandro is found floating dead in the pool.

The police quickly call it an accident and anyone Maddie talks to agrees.   Then there is another "accident".   Suddenly everyone is talking.  No on really liked Alejandro, he was mean, and it was definitely murder.   Maddie is shocked ot hear all of this but she's on her way home...or she was.

The producers have changed the schedule and now The Frugalicious Family is hot on the case.   While they explore Mexico they ask the hotel staff, family members, and people in town questions about the murder.  The more they learn the more confused they become.  Can they solve the murder before one of them ends up the next victim?

I found this book highly entertaining and easy to read.  I liked Maddie a lot.  While she goes along with the script she knows when to ask questions and when to rewrite the script.   She understands the real world and a good bargain.   While she isn't very fond of her husband, she's able to work with him enough to make it work on the TV show.

Maddies' boys are typical teenagers.  They are hungry for knowledge and want to be part of everything, even the investigation.   While Maddie is interviewing hotel staff the boys are running around talking to everyone they can find.   Then there's Maddie's stepdaughter.   She's fallen for Ivan, one of the hotel workers.   While she's cozying up to him, she's also asking questions.