Determined to seek his fortune, Percival Taylor leaves behind his sleepy hometown and sets out to become a legendary pirate—only no one at the roguish seaport of Blackshore will allow him any- where near a ship!

Percival must find other means to win the heart of the beautiful Tuppence Magrathia-Paddock, who has mistaken him for a pirate rogue out of one of her romantic tales. She is entirely willing to swoon into his arms if he can prove his buccaneer soul—and she is willing to arrange her own kidnapping to prove it.
Percival eventually finds himself captain of a broken-down ship, complete with a crew of pirates who make their living selling fake treasure maps, a jilted fiancee, a reclusive Master Shipwright, and an old professor with a secret that could kill them all. It’s Pirates of Penzance meets Princess Bride as this motley group of characters sets sail for treasure and romance.  (-synopsis) 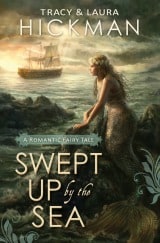 Percival is set to wed a local girl at the insistence of both their parents but instead he finds himself longing for an adventure.  He dreams of becoming a pirate, even though he becomes easily seasick, and wants to win the heart of beautiful Tuppence in the process.
However, when Percival starts on his journey Vestia, the girl he was to marry, follows him in hopes of winning his heart.  The journey takes some funny turns and there are some laugh out loud moments in the book.  There were a lot of characters in this book and it was hard to remember who everyone was but in general this was a fast paced book with a lot of good scenes.
While I liked the book, it is definitely geared more towards young adults who would enjoy the adventures and seeking of the treasure.
I give this book 3 out of 5 stars.

About the Authors
Tracy Hickman is a New York Times best-selling fantasy author who has published more than 40 novels, many of the co-authored with Margaret Weis. He published the first of his solo novels in 1995. Laura and her husband, Tracy have been collaborating on fantastic works of fiction since their marriage in 1977. Together, Laura and Tracy have written role-playing games, screenplays, and works of fiction, including their first co-authored novel in 2004.