One night of phenomenal sex isn’t enough to convince Sylvie that she should stay with Dave, her long-time boyfriend who borders on dull when not in the bedroom. When a set of twins moves in across the hall, Sylvie’s horizons broaden, though this pair might not turn out to be exactly what they seem. With a backdrop of inappropriate coworkers, a humping-addicted mutt, and a set of sexy suitors, SYLVIE AND THE SPARK is sure to please, in more ways than one.  (-synopsis) 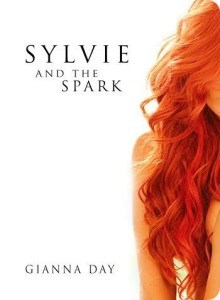 The book opens with Sylvie and her boyfriend Dave.  Sylvie is tired of having her nights with him end the same way and after a spectacular night with him, when she thinks things might change...they don't.  The pair break up much to the dismay of Dave.

While Sylvie is struggling to deal with the breakup, a set of sexy twins show up next door.  One is tall, dark, and gorgeous while the other seems to be tense, uptight, and not much fun.  When Sylvie begins dating the gorgeous brother she has no idea what she is getting herself into.  After a few days with him things take a strange turn.  Soon Sylvie isn't sure she's meant to have a boyfriend.

Just at this time the most unexpected person comes to her rescue and Sylvie realized that first impressions aren't always what they seem.

I found the book to be short, fun, and easy to read.   Sylvie was a believable character; she's a waitress who spends one day a week with her mother and is looking for love.  Some of the other characters aren't so believable.  There's drop dead gorgeous blond twins who work at the diner with Sylvie.  They speak what's on their mind, enjoy hearing about her love life, but are both going to school to be scientists because of how brilliant they are.  The twins that move in next door are something else as well.  One brother ends up being over the top while the other is believable and down to earth.

There were a few humorous parts that made me chuckle.  The owner of the diner is blunt and Russian and can be fairly amusing.  Sylvie's mom is also a funny character with her ideas about the Internety.