Jack "Keeper" Marconi is back. In The Guilty, Jack finds himself investigating a local restaurateur who’s not only obsessed with the sexy, dark romance novel, Fifty Shades of Grey, he’s accused of attempting to murder his school teacher girlfriend. As the now brain-damaged young woman begins recalling events of that fateful winter night when she was allegedly pushed down the stairs of a West Albany mansion, she becomes the target of the angry foodie/sex-obsessed boyfriend once again. Only this time, he’s cooking up a plot to keep her silenced forever.  (-synopsis) 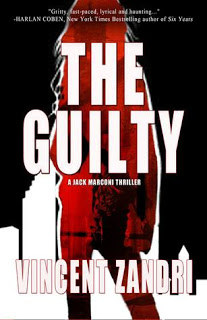 Jack Marconi is a private detective who is hired by Sarah's father to find out if Junior shoved her down the stairs and tried to kill her.  Sarah is just waking up from a 6 month coma and doesn't remember anything about her life.  She's in the hospital just fighting to gain her speech and thoughts.

Meanwhile, Keeper is tracking both Mr. David, Sr. and Mr. David, Jr.  When he first speaks with both of them he basically gets tossed out of their places.  Not one to be deterred he goes on to the next person who can tell him about the night of February 18th.  As he's going from one stop to the next a man begins following him and then starts shooting at him.  He realizes he's hot on the trail of something and that he needs some help.

Instead of going to the police, Keeper goes to Blood.  Blood is a former inmate at the prison where Keeper used to work.  While he isn't a trained officer, living on the streets as a younger man and being in the street trade business, Blood is a crack shot and loyal to Keeper.  The two begin looking deeper into what happened to Sarah and begin to find a crazy secret world where torture and love are part of the same game.

I enjoyed the characters the most in this book.  I found Keeper to be a sarcastic, funny, and persistent man.  Mr. David, Jr. was a spoiled 41 year old man child who always got his way thanks to his daddy's money.  My favorite character was Blood.  He was loyal to the end and always ready to go whenever Keeper needed him.  He was also sarcastic and straight to the point.  The cast of characters are what really made this book for me.

The story itself had ups and downs.  While it all tied up neatly in the end, there were several incidents that didn't really add to the story and I wasn't sure why they were in the book.  The surprise ending was really good though I wish there were more clues throughout the book to lead up to what happens in the end.