In a society where all citizens have computerized chips in their brains and insert needles into their veins to enter a virtual reality, Victor Vale is an officer of the law with great ambitions. When he is assigned a case to go undercover and expose a community of illegal creators, Victor finds himself compelled to write, and for the first time, begins questioning the world around him. As he searches for answers, Victor slowly begins to unravel hidden truths about society, and even uncovers an astonishing secret from his own past.  (-synopsis) 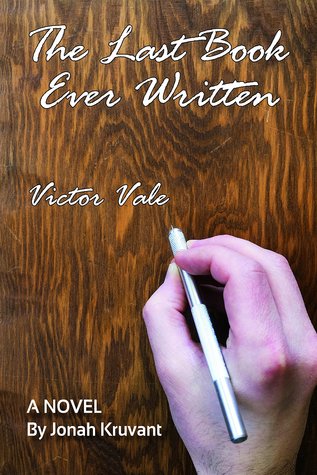 The book opens in a dystopian world where Upperclassman and beggars are separated not only by their jobs but in the areas they live.   The citizens all have computer chips in their brain and can have access to any information they want simply by thinking about it.   People take pictures with their eyes and run data searches with a simple thought.

Victor Vale is a police office, a detective actually.  He is an Upperclassman thanks to who wife...the daughter of a very famous lawyer.  He is also one of the few police who walk through the Slums.   He's not afraid of the beggars and he feels like he needs to be there, walking through them for some reason.  He has a son and huge ambitions to become First Detective and to protect his City.

Victor's world changes when he is given an undercover assignment.   He is to go to a bookstore a expose a group of creators, the worst type of traitor in The City.  As he begins to infiltrate the creators group he begins learning things that have him questioning the world as he knows it and The City in which he lives.

This book shows us the world from Victor's point of view.  He is the narrator and the one who is writing this book.  It is full of tiny  bits of satire such as the day when UNICE goes down.  Victor talks about how is was a horrible time and how people were throwing themselves off buildings it was the worst two minutes they had every experienced.  There are small tidbits like this throughout the story.

The story line really made me think about where we are with technology in our own world and where we might be going with it.   The more Victor delves into the world of the creators the more he questions everything he knows about The City.   He begins to find out secrets about the society that were previously unknown to him and that make him wonder who really knows what's going on.

I found this to be a book that really made me think about the future.   I liked Victor's character and I had a lot of the same questions as he did.  At the end of the day Victor has a choice to make; will he side with The City and the police or will he himself turn to the creators?