Today I'm going to talk about my heritage.    Does anyone have any idea where I come from?  I've had people guess and some people get close but others have no clue.   Hearing my maiden last name doesn't really help because my ancestors shortened it when they came to America. 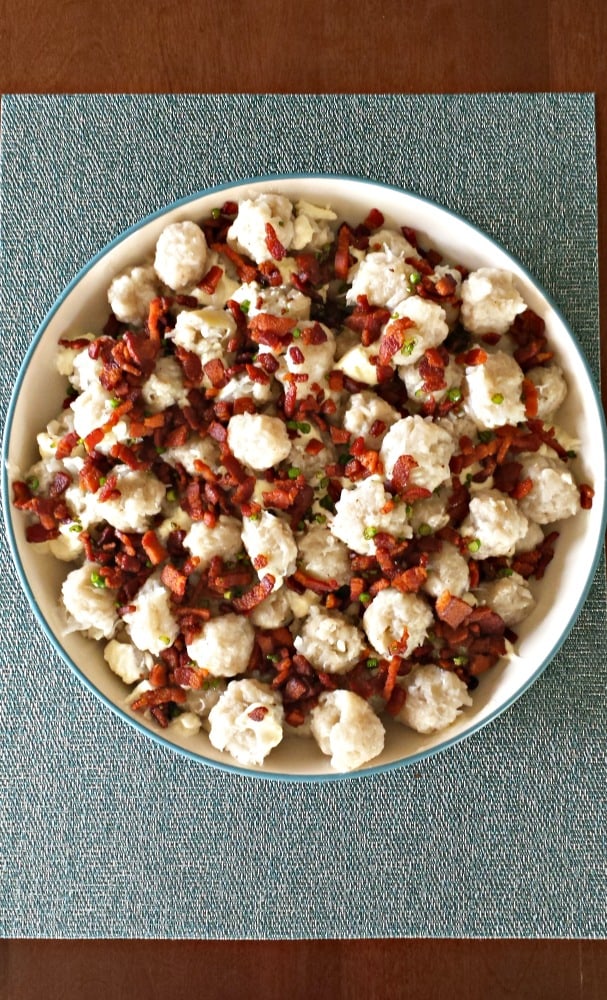 On my mother's side I am mostly Welsh, hailing from Wales.   No surprise there.   On my dad's side I'm mostly Slovakian though my grandma was partially Polish.  That's the one that usually surprises people.  When I say it they are like from the Czech Republic?   No....from Slovakia which used to be part of Czechoslovakia. 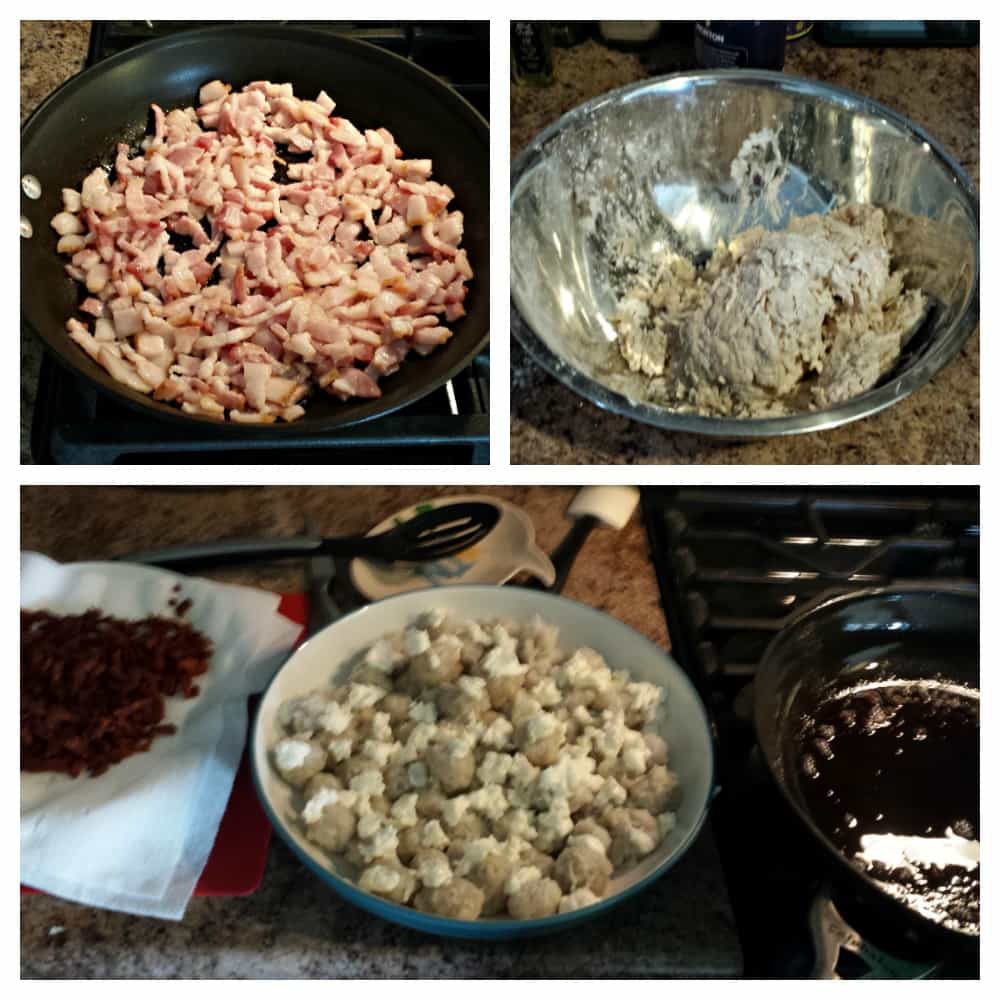 That's where this recipe comes from.   As a kid my relatives cooked a lot.  My mom's family cooked a lot of very America food because they were from Wales and that's what they were used too.   On my dad's side they cooked a lot of traditional Polish and Slovak food.   My Aunt Mary would always make Paska (I have a recipe for it, check it out), my Aunt Kaye would make Pierogies (I also have a recipe for that!), and my grandma would make stuffed cabbage and Haluski.  Did you notice that I spelled that differently then the title of this recipe?   There's a reason. 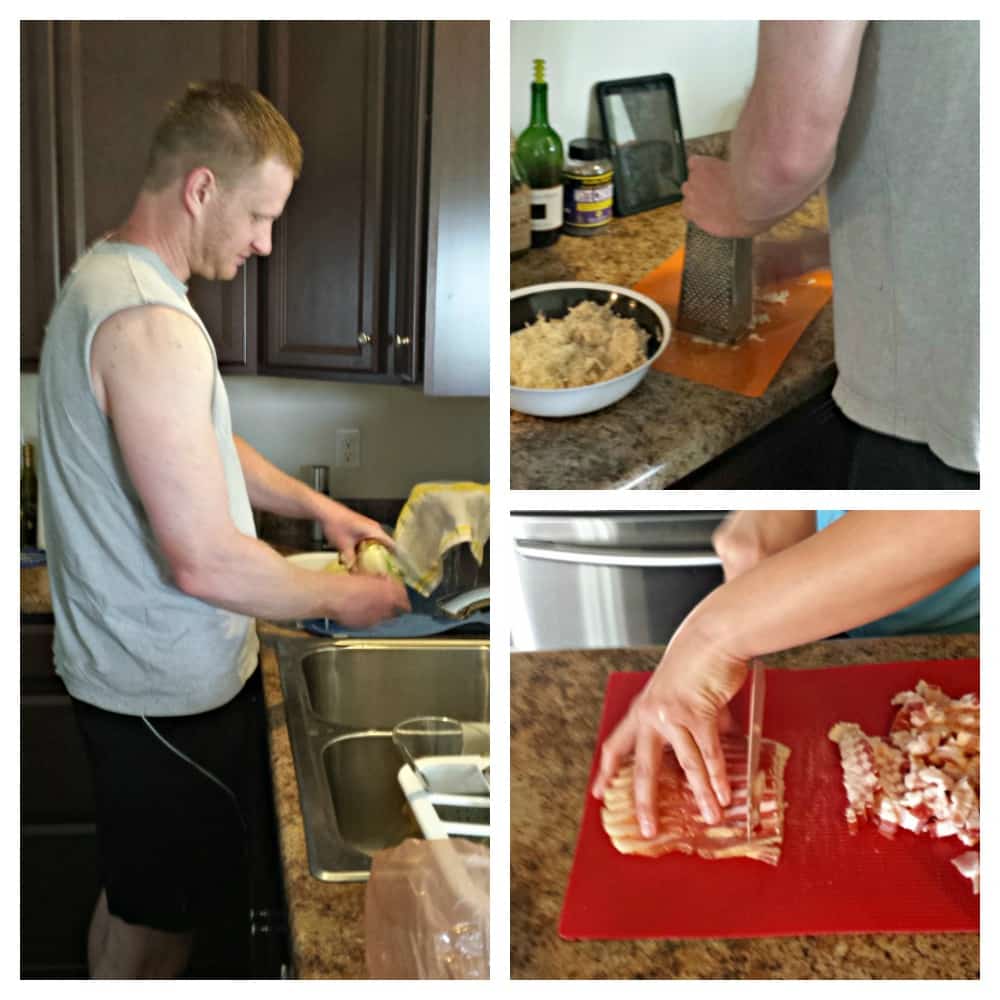 My grandma made the Polish version of Haluski which I think most people in America are familiar with.  It's a noodle and cabbage dish tossed with onions, butter, and a bit of sugar.  It's pretty good and I would eat it when my grandma made it.

So this summer my brother asked if I wanted to make Halusky with him at his house.  I said sure and asked if we were using grandma's recipe.  He replied that her way was this Polish way and he wanted to try the Slovak Halusky.   I didn't know there was a different and I was game to try it. 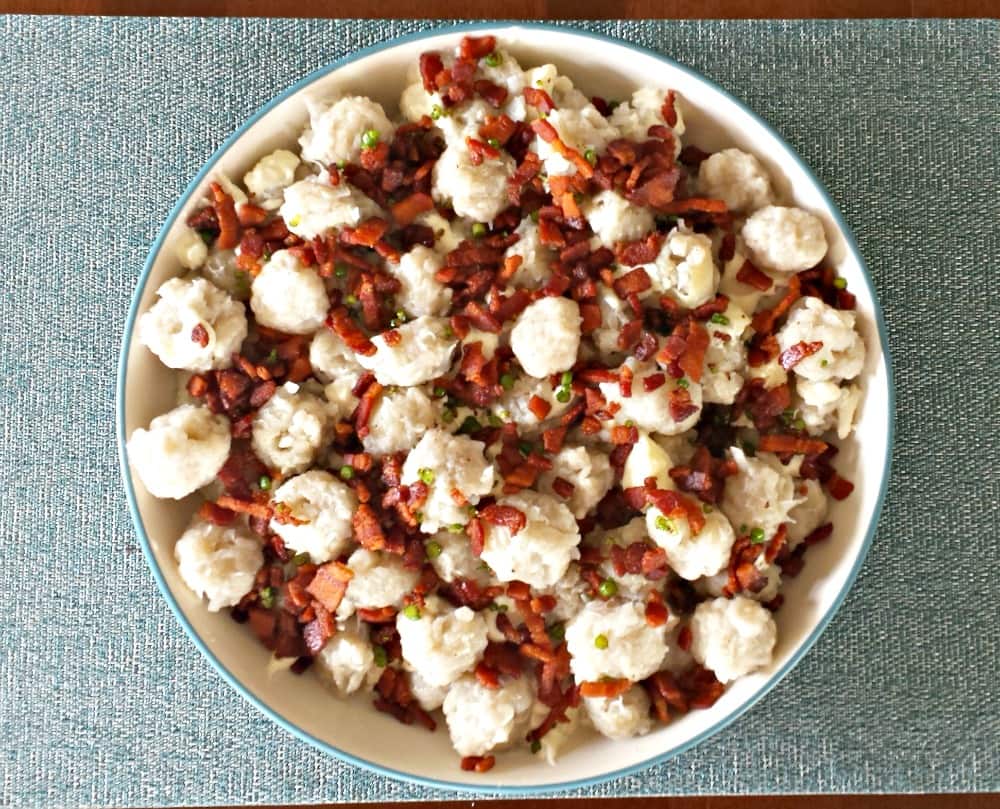 My husband and I were coming to Pittsburgh anyhow so we came a day early and hung out with my brother and sister-in-law and made the Halusky.   It was totally different then what I thought it was going to be.   Instead of egg noodles it uses homemade potato dumplings made of flour, grated potatoes, and salt.

That is such a simple dumpling.   We made SO MANY dumplings.  I'm not kidding you.  I'm not sure what my brother was thinking but it turned out we had a ton.   After that you put sheep cheese and crispy bacon on top.  We added a little salt and pepper and chives as well but that's it.   It's a very simple recipe. 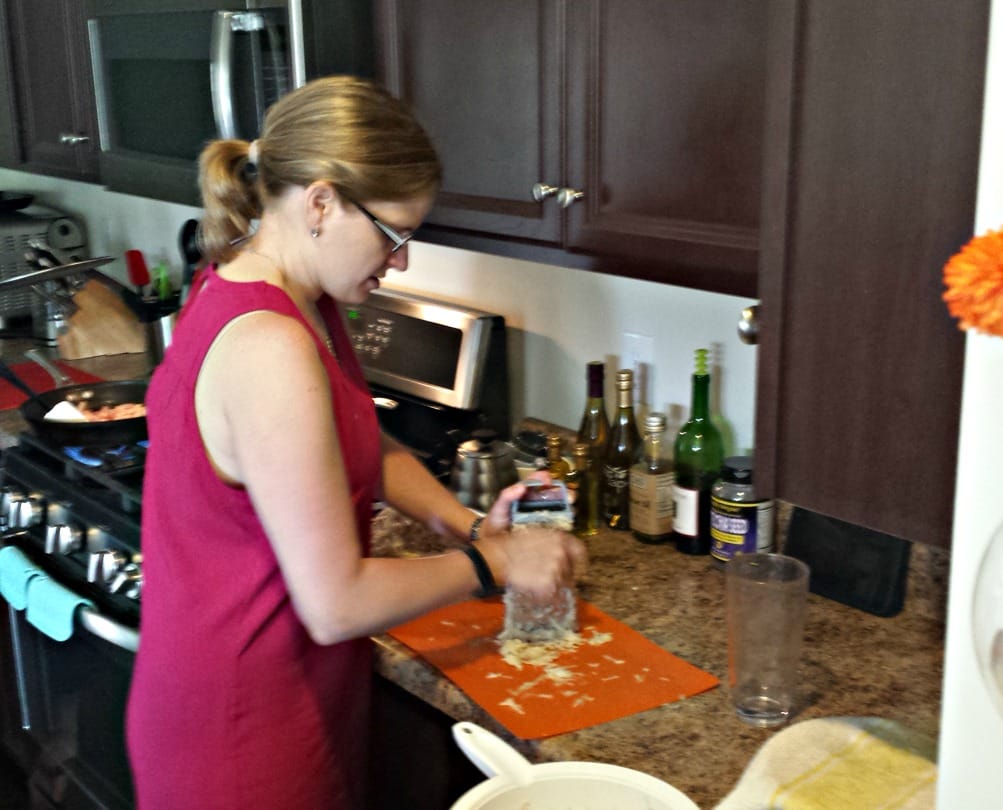 I'll be honest, I wasn't really sure what to expect.   My brother had to go to a special shop to get the sheep cheese and I ran last minute to the market for the bacon.   My brother, sister-in-law, husband, and I sat down around 10 am and each had a bowl of the Halusky. 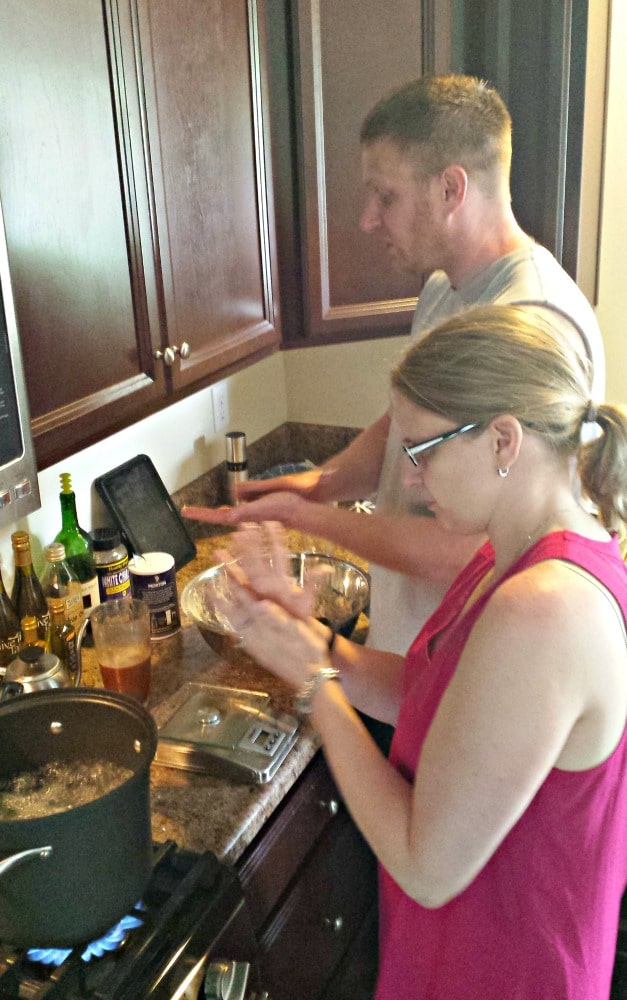 I was pleasantly surprised by the flavor.  The salty, crispy bacon paired with the creamy sheep cheese and the dumpling was pretty tasty!   The only main problem is that this dish is so heavy.  After just a small bowl I was so full.   However my brother was happy and I was happy to have a new recipe for the blog!  Plus it was fun cooking in the kitchen with him and it was good practice for our first time hosting Thanksgiving!

Recipe from WikiBooks
Note: This recipe can easily be doubled or tripled. We tripled it. 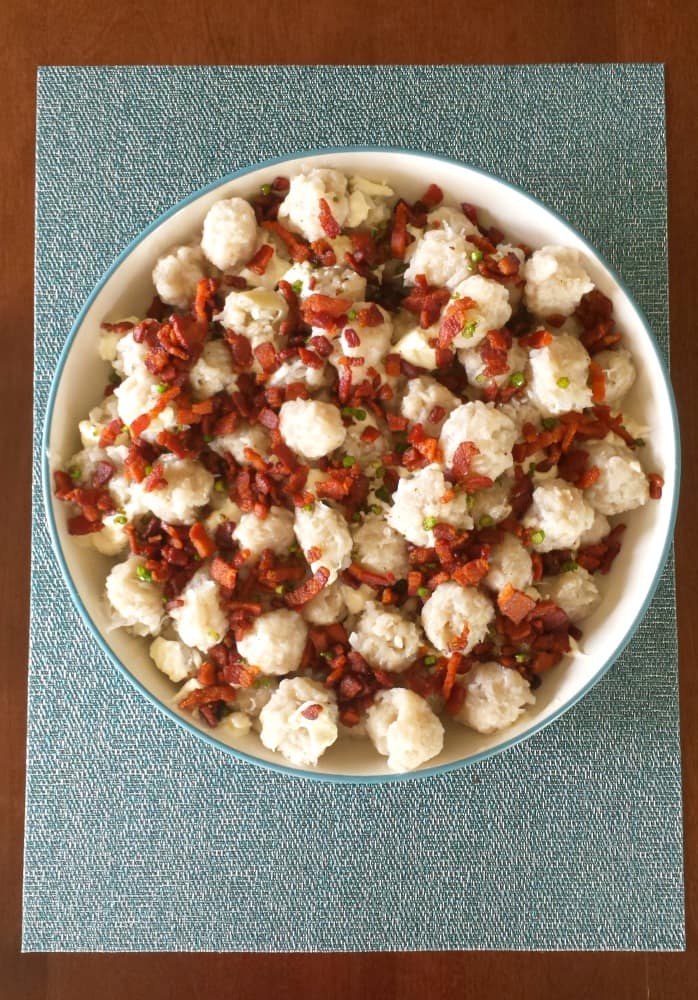