This Thanksgiving Frank and I traveled to my parents house to eat Thanksgiving dinner.  We also spent the night so I could do some Black Friday shopping with my cousin and mother.  We were fairly successful with our shopping even though I may or may not have caused a slight riot at one store.  We were standing around wireless air printers that we weren't allowed to grab until 10:00.  At 9:55 a gentleman reached his hand over my head and put his hand on the box in front of me.  All I could think of was the box going into my face. 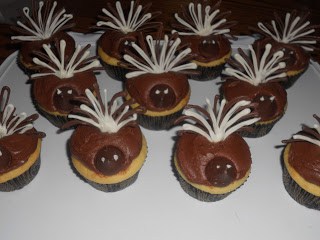 One man shouted that it was 9:55 and everyone tensed.  A minute later a woman yelled that it was 9:56.  Tired of waiting and afraid that I was going to be hit in the face I looked around, placed my hand on the printer I wanted, yanked the box, and yelled 10:00!  As I ran with my printer the store erupted with other people grabbing for their printers as well.  I'm happy to report I got the printer and escaped without inury.

When we got back home I was starving so I had a few of my desserts.  As usual I was the one who made the desserts for Thanksgiving dinner.  This year I made vanilla cupcakes with chocolate frosting that were decorated like adorable turkeys.  I also made simple but cute acorn cookies.  For my reward party at school I made the students chocolate dipped fruit and nut cornucopias.  Everything was fairly easy to make and tasted great too.

Turkey Cupcakes (decorating ideas from Betty Crocker's The Big Book of Cupcakes)
For the cupcakes:

2.      Combine all the dry ingredients in a medium sized mixing bowl.  Set aside.

3.      In a large bowl beat the eggs.  Add in the sugar and mix for 30 seconds.  Stir in the butter and mix well.  Scrape the inside of the vanilla bean into the bowl and add the Godiva white chocolate liqueur.  Mix until well combined.

5.      Pour the batter into the prepared cupcake tin filling each cup ⅔ of the way full.  Bake for 18-20 minutes or until the tops are golden and a toothpick comes out clean. 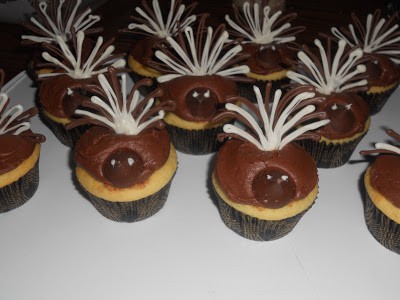 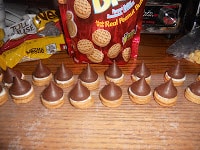 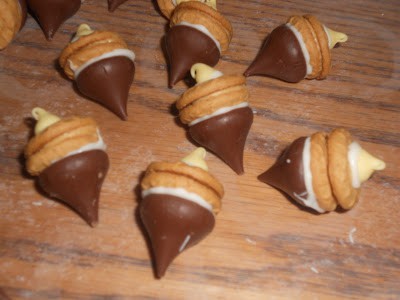 12 sugar ice cream cones
½ c. white chocolate melts
2 c. dried fruits
1 c. mixed nuts
1.  Place the white chocolate in a bowl and microwave for 30 seconds at a time until melted.
2.  Dip the open end of each cone into the chocolate and allow excess to drip off.  Place on a piece of waxed paper to dry.
3.  Mix the dried fruits and nuts in a bowl.
4.  Spoon the fruit and nut mixture into the dried cones and serve as cornucopias. 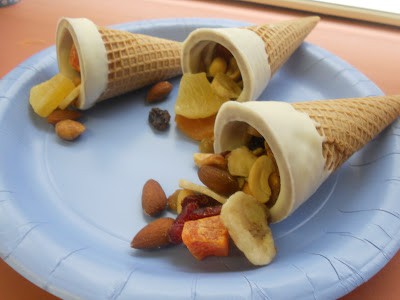