Weirdo is an atmospheric thriller about a teenage girl convicted of murder in a 1980s seaside town and the private investigator who reopens the case to discover that she may not have acted alone . . . Corinne Woodrow was 15 when she was convicted of murdering one of her classmates on a summer’s evening in 1984, a year when the teenagers of Ernemouth ran wild, dressing in black and staying out all night, listening to music that terrified their parents. Twenty years later, new forensic evidence suggests that Corinne didn’t act alone. Private investigator Sean Ward — whose promising career as a detective with the Metropolitan Police was cut short by a teenage gangster with a gun — reopens the case. He discovers a town full of secrets and a community that has always looked after its own. (-synopsis) 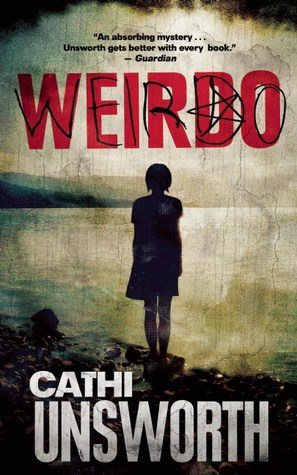 The story opens with Sean Ward, a private investigator hired to investigate a murder over 20 years ago in a small seaside town.  The murderer was a 15 year old girl.   After new forensic evidence is introduced in the case, it's found that Corinne could not have acted alone.  Now Sean has to go to that town and investigate what happened all those years ago.  The only problem is that the townspeople don't want to talk about the summer that changed the town forever.

This book is written in two times.   It goes from present day time with Sean wondering the streets looking for information the early 1980's when things started changing in Ernemouth.   It was the year that Samantha moved to town.  Friendships were made, friendships were ruined, boys were turned into men, and girls were caught doing things far beyond their years.   The teenagers in Ernemouth hung out at Captain Swing's where they drank beer and talked about the future.  No one knew it was where their lives would change forever.

In present day Sean goes to visit Corinne.  She doesn't say much and acts terrified when he suggests someone else was involved in the murder.  He finds a local reporter who will share with him everything she knows and helps him speak to the people of the town.  He also befriends a retired cop who was involved in the incident years ago.  The cop tells him what is in the reports but nothing more.  There's something that everyone in the town is hiding and Sean is determined to find out what it is.

This story is an intense read that leads you everywhere and nowhere at the same time.  Every time I thought I had something figured out, the tables turned and I saw something new.   It's a suspenseful thriller that will keep you reading.