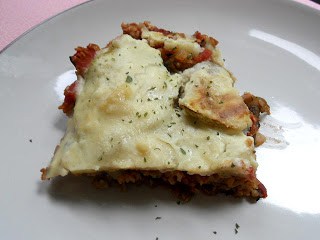 Moussaka is on my list of things to make while I am 31.  I have seen many versions of this dish and have thought that each one looked delicious.  I love almost anything with eggplant and tomatoes in it.  I came upon this recipe in Cooking Light Magazine and was excited to see it was vegetarian.  We were having vegetarian friends over and I love making a main dish that can be made ahead of time and simply popped into the oven when company arrives.

The trick to making this moussaka vegetarian is that the ground lamb is substituted with bulgur.  The bulgur has a texture that is similar to the ground meat and makes this dish filling.  In the picture it looked like the entire dish was covered in cheese but I was surprised to find out it was actually a combination of milk, egg, flour, butter, and Parmesan cheese.  My husband actually thought it was a cheese sauce over top of the moussaka.

We ended up enjoying the moussaka and our friends really liked it as well.  I thought the flavor from the cinnamon and nutmeg in this savory dish gave it an exotic quality.  It was easy to make the morning they were coming and I put it in the oven once they arrived.  I've made this dish 2 other times since they have come over and it's becoming a favorite vegetarian recipe of ours. 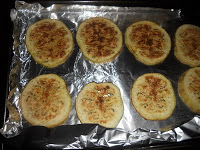 1 egg, beaten
1.  Preheat the oven to broil.  Brush the eggplant slices with olive oil and place in a single layer on a foil lined baking sheet.  Broil for 3-5 minutes on each side or until browned.  Repeat with the remaining eggplant.  Remove from oven and put on a plate.  Set aside. 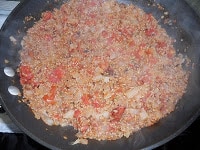 2.  Heat remaining 1 tablespoon of olive oil in a large skillet over medium high heat.  Add onion and saute for 5 minutes.  Add in the garlic and saute for an additional 1 minute.  Add uncooked bulgur and cook for 3-5 minutes or until the bulgur is lightly toasted.   While stirring, add in the cinnamon and nutmeg.

3.  Pour in the vegetable broth, oregano, parsley, and tomatoes.  Bring to a boil.  Reduce the heat and cook for 20 minutes or until thickened, stirring occasionally.

5.  In a small saucepan, melt the butter over medium heat.  Add in the flour and cook for 1 minute stirring constantly.  Slowly add in the milk 1-2 tablespoons at a time, whisking constantly.  Bring mixture to a boil and reduce the heat.  Simmer for 5 minutes then remove from heat.  Stir in the salt and Parmesan cheese.  Let cool for 5 minutes. 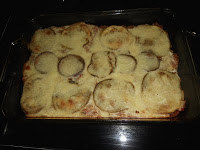 6.  Slowly pour the egg into the milk mixture, whisking as you pour.

8.  Bake for 40 minutes then remove from oven.  Increase the oven temperature to 475 and return the dish to the oven.  Bake 3-5 minutes or until the top is browned.  Let stand 10 minutes before serving. 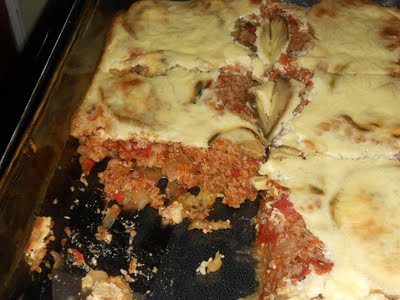