My brother was excited to go to "The Works" for lunch when we recently went to Ottawa, Canada.  He said that they have over 60 combinations of burgers and plenty of yummy sides.  It sounded good so we went there on our last day in Ottawa. 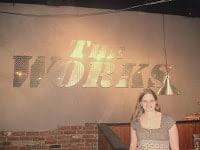 The Works is a great little chain of restaurants located in Canada.  The whole idea is to build the ultimate burger.  We received the brown paper menu with a list of all the burger toppings.  The drinks come in huge glass Fire-King measuring cups which was pretty cool.  The walls are covered in cement, brick, gadgets, and gizmos. 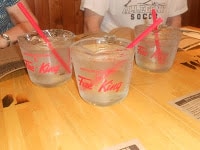 There are 4 things we needed to decide before ordering.  First, decide on a white bun or a wheat bun.  Second, choose a burger.  They have beef burgers, turkey burgers, grilled chicken breast, veggie burgers, and portabello mushroom caps.  For an additional price organic beef or elk can been substituted.  Next  I had to choose a topping.  Finally came the choice of sides:  factory fries, sweet potato strings, spicy die-cut chips, lumpy mash, green weeds, or bold slaw. 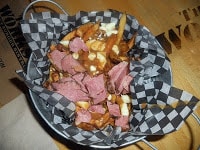 My family decided to start out with an Ottawa favorite-Poutine.  Poutine consists of fresh cut fries with beef gravy and fresh cheese curds.  At The Works they take it to a whole new level with meat and other toppings.  We chose to have ours with thick sliced Montreal smoked meat.  My dad and brother loved the poutine.  My mother and I liked the fries, but I wasn't a big fan of the meat on top. 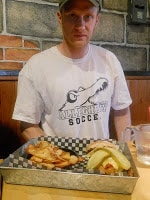 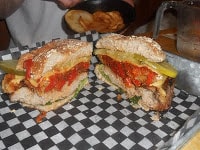 My brother chose to have the R.O.F. Burger.  He had it on a white bun, with a ground turkey burger, and a side of spicy die cut fries.  His toppings included an onion ring, jalapeno peppers, banana peppers, chipotle peppers, and jack cheese.  He was in his glory on this one.  The burger was huge and "hotter then hell" as promised.  He ate this one up in a hurry.
My father chose to have the Rockcliffe Grinder.  He had it on a wheat bun, with grilled chicken, and a side of sweet potato strings.  His toppings included Cajun breading on the chicken, Crazy Frank's hot sauce, tomatoes, chipotle mayo, and bacon.  This burger was also large.  It was a little bit spicy and he said the chicken was moist and juicy.  He loved the sweet potato strings with there sweet, crispness. 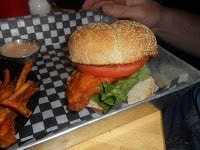 My mother does not like the spice that my brother and dad seem to gravitate to.  She chose to have the Teriyaki Melt.  Hers was on a wheat bun, with grilled chicken, and a side of sweet potato strings.  Her toppings were sauteed wild mushrooms, teriyaki sauce, and Swiss cheese, though she changed the cheese to brie.  She enjoyed her juicy chicken and said that the sauce was just right.  She really liked the addition of the brie to the burger. 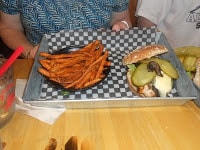 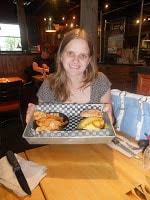 I went with our waitresses favorite, The Red House.  I am all about the vegetable goodness.  My burger was on a wheat bun, with a huge portabello mushroom cap, with a side of spicy die-cut chips.  My toppings included roasted red peppers, avocado, beechhouse sauce (which is a creamy garlic sauce), and Havarti cheese.  I substituted the Havarti with jack cheese.  The burger was huge.  The portabello was thick and tasty and the combination of toppings was amazing.  Truly a vegetarian delight.  It was filling, delicious, and seasoned perfectly.  The die-cut chips was crisp and spicy. 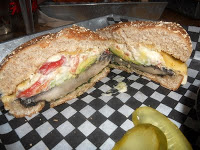 Overall we had a great meal that left us full for most of the day.  I will say that the burgers are pricey, but the side dishes come with them and the meal is filling.  We all enjoyed our burgers and would like to go back again to try out a different combination of burger!