All Signs Point to Murder by Connie di Marco

Julia Bonatti is alarmed by the astrological signs looming over Geneva Leary’s wedding day, but nobody asked Julia’s opinion and being a bridesmaid means supporting the bride no matter what. Even with the foreboding Moon-Mars-Pluto lineup in the heavens, no one’s prepared for the catastrophes that strike: a no-show sister, a passed-out wedding planner, and a lethal shooting in the dead of night.

With anger and grief threatening to tear the Leary family part, Julia is determined to understand how such a terrible tragedy could occur. As she digs deeper into the family’s secrets, her astrological insights will lead her to the truth about a criminal enterprise that stretches far beyond the California coast.  (-synopsis) 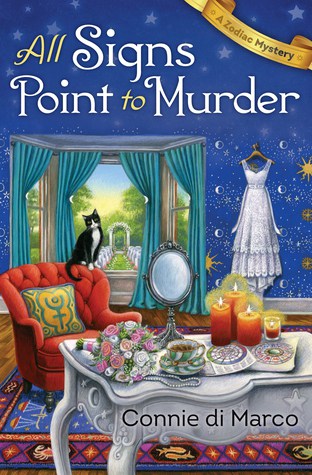 Julia knows that the stars say her old friend Geneva's wedding day will have some problems but she doesn't think that means a murder!  When the bride's sister ends up dead and a family member is left holding the gun things go bad quickly.   The family begins fighting, friends are suspecting each other, and the police are searching everyone's homes.

Julia doesn't want to get involved but when Geneva asks her for help she can't say no.   While she is going to do astrological charts for everyone in the family, Geneva also wants her to snoop around and see if she can find any clues.  Julia begins doing a little digging on her own and things aren't adding up.

Who would want the bride's sister dead?  Why was the sister sneaking around the house in the first place?   Who was she talking too?  Julia and Geneva need to find out who the real murderer is before someone they know goes to jail!

I really liked Julia's character.  She lives modestly and is an astrologer.  She is loyal to her friends and will do anything to help Geneva find her sisters killer.  Geneva is a strong willed woman who manages to keep it together the day after her wedding while holding down the fort at her moms.

The rest of Geneva's family is in a tailwind as everyone suspects someone else in this fabulous cozy mystery novel!