In case you haven't heard by now, I entered a burger contest at Giant Eagle Market District in Pittsburgh.  Contestants had to live in Pennsylvania, Maryland, Ohio, or West Virginia so luckily I was able to participate.  They had two categories-a beef burger category and a vegetable burger category.  I entered a black bean burger in early June in hopes I'd hear something later in the month.

In making the burger I took elements of the best black bean and veggies burgers I've eaten and combined them together.  They made for a moist, tasty black bean burger.  The avocado sauce adds a different texture and a bright color.  The roasted red peppers add a sweetness and the mozzarella cheese is smooth and delicious.

They ended up having hundreds of entries.  From those entries they chose 10 beef burgers and 10 vegetable burgers to make and be judged.  From those entries they came up with the top 3 in each category to compete at the store in early July.  Imagine my surprise when they called and told me that my black bean burger was in the top three!  We immediately made plans to go up to Pittsburgh for the contest. 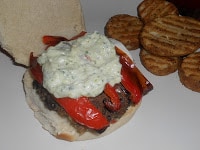 The day of the contest was exciting.  I knew my parents, my brother, and his girlfriend were coming to see me but my cousin, her son, my aunt, and another one of my cousins ended up coming to show their support.  It was so sweet of them to take time on a Saturday to come see my burger compete.  The burgers were made by local chefs and judged by a panel of local celebrities including newscasters, local chefs, restaurant owners, and the manager of Market District.

When they announced the winner I was so shocked I started clapping and looking around when I realized I had won!  I was so excited to have won this competition.  I received a gift card for the Market District, which my husband and I promptly used, and a sweet trophy.  The best part was that several of the judges came over afterwards to tell me how much they enjoyed the burger.

2.  Place the quartered red peppers on a baking sheet.  Drizzle with olive oil.  Bake for about 20 minutes or until the skin is beginning to char. 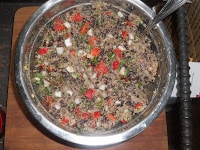 3.  Remove the roasted red peppers from the oven.  Cut half of them into strips and set aside to cool.  Dice the other half of the peppers to use in the burgers.
4.  Place 1 can of the drained black beans in a large bowl and mash with a fork.
5. In a medium bowl combine the egg, egg white, remaining olive oil, cumin, oregano, salt, peppers, and garlic.  Stir to combine. 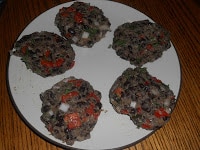 6.  Add the egg mixture, breadcrumb mixture, remaining black beans, dice roasted red pepper, cilantro, parsley, and onions to the bowl with the mashed black beans.  Stir together until  combined.
7.  Place the mixture in the refrigerator for 15 minutes while making the avocado cream.
8.  Place all the ingredients for the avocado cream in a food processor.  Processor until smooth.  Remove to a small bowl and refrigerate until ready to use. 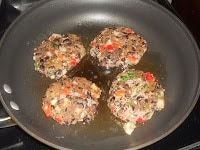 9.  Divide the black bean mixture into 6 black bean patties.  Pack them into burgers about ¾ inch thick.  Heat 1 tablespoon of olive oil in a large skillet over medium high heat and place the burgers in the pan.  Cook until brown on one side, about 5 minutes, then flip and cook for an additional 5 minutes.
10.  Remove from pan and set on a plate.
11.  To serve place the black bean burger on a brioche bun.  Top with a slice of mozzarella cheese, 4 strips of the reserved roasted red pepper, and a few tablespoons of arugula.  Spread a tablespoon of the avocado cream on the top of the bun and place on top.  Enjoy. 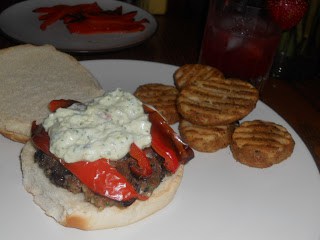