This week our recipe exchange theme was special occasion.  I was excited to see my recipe because I don't often cook for special occasions and can always use more recipes.  My recipe comes from the host of this exchange, Sarah from A Taste of Home Cooking.  When I received my recipe for bacon, egg, and asparagus salad my first thought was that I was going to write and say I couldn't make this one.  The problems being that I don't really like eggs and I don't eat asparagus.  Well, that's not exactly true.  I have eaten asparagus but I don't really like it. 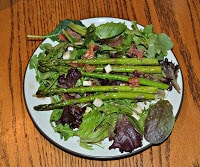 The more I thought about it the more I thought I could make it work.  My husband enjoys asparagus and he loves bacon so I knew he'd be more then happy to try this salad.  To make it more "Hezzi-D friendly" I opted to remove the eggs and instead added Gruyere cheese.  It turns out this was the perfect solution!

Let me first say that the dressing was awesome.  A simple but delicious Dijon vinaigrette that both Frank and I enjoyed.  The salad greens were beautiful with the pink bacon and white cheese.  I actually ended up eating some of my asparagus because I liked the dressing so much.  My husband gave it two thumbs up saying that he could eat this salad everyday!

1.  Combine the Dijon, vinegar, olive oil, and parsley in a bowl.  Mix well.  Set aside until ready to use. 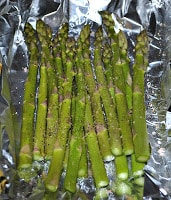 2.  Preheat the oven to 400 degrees.  Line a baking sheet with foil. Lay the asparagus on the foil then drizzle with olive oil and sprinkle with salt and pepper.  Cook for 6-7 minutes or until they are just cooked through.

3.  Meanwhile, cook the bacon in a skillet until it is crisp and brown.  Drain on paper towel lined plate and then crumble.

4.  In a medium bowl toss the salad mix, salt, pepper, bacon, and Gruyere cheese with three quarters of the vinaigrette.  Arrange the salad mixture on two plates.

5.  Toss the asparagus with the remaining vinaigrette and lay the spears on top of the salad mix. 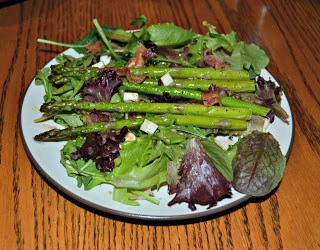